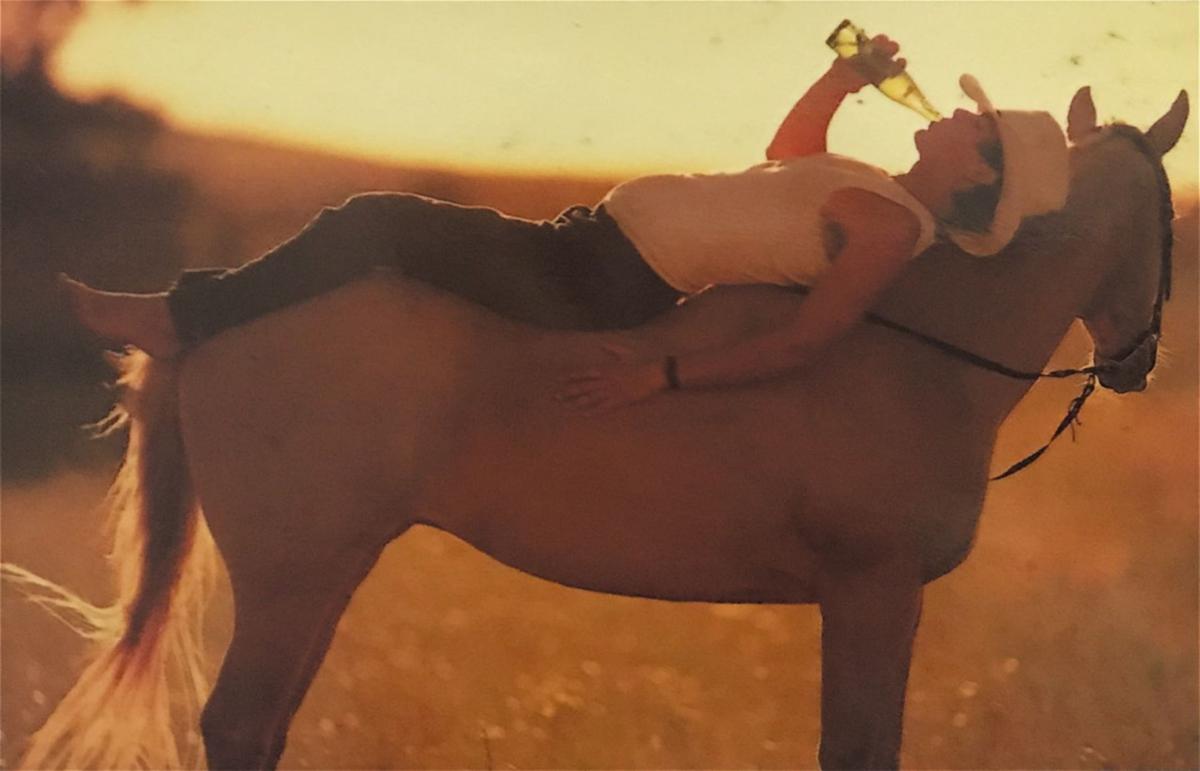 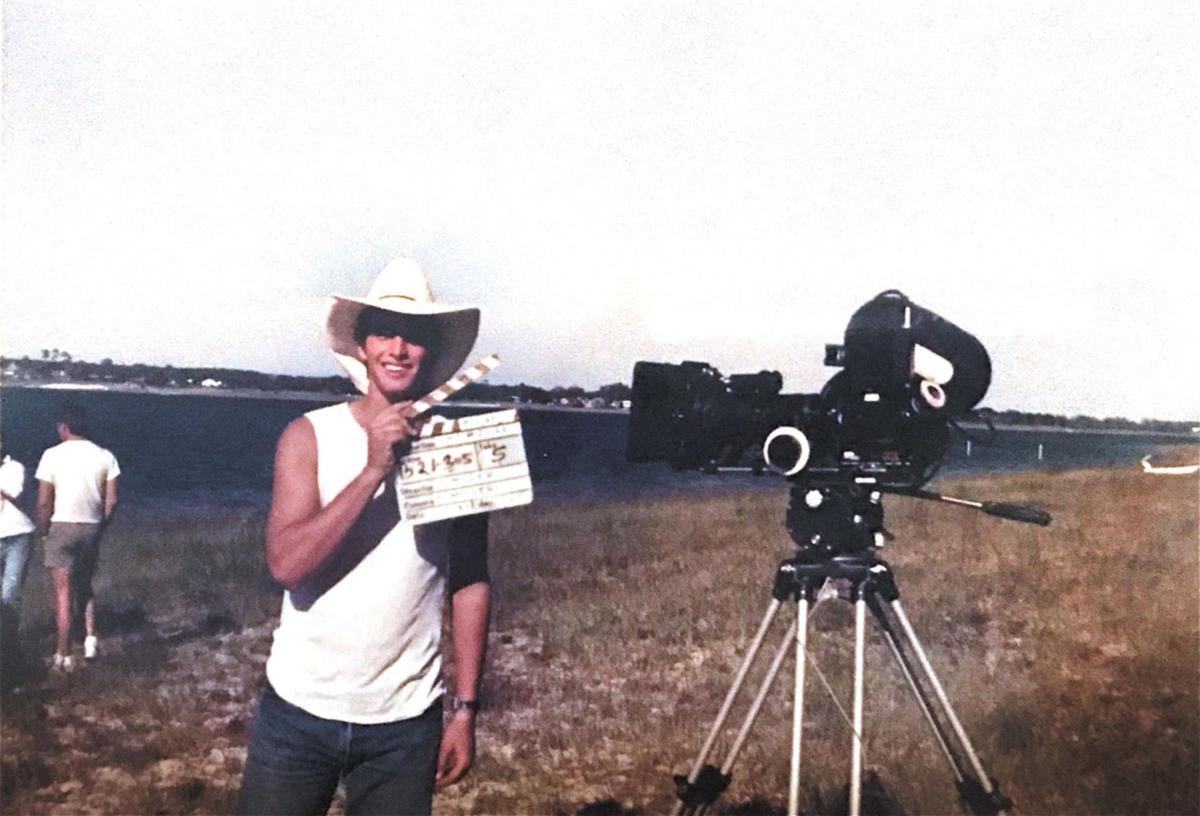 Just as the sun popped up over Eagle Lake, you would find me training racehorses back in the 80s. It was a necessity to be out early to keep me and the horse as cool as possible. We had to get our work done before the heat arrived as it did every day. While galloping along the lakefront I would often hear the low rumble of a Ski Nautique in the distance. It was our neighbors doing some training themselves; Barefoot waterski training that is. We would wave to each other and continue on with our training.

One day after we both ﬁnished up our work, my friend Ron Scarpa came over and asked if I thought one of my racehorses could pull him on a water ski.  “I think so,” I answered.  After thinking about it for a second, I agreed to give it a try.  I decided to use Sunkist my Quarter Horse.   Sunkist was my favorite horse, I loved her, she was a true cattle cutting horse. Her breeding came from the famous King Ranch out in Texas. She would turn on a dime and run faster and quicker than any horse I ever rode. She was named after the Sunkist orange because of her palomino color.

So I saddled her up and Scarpa brought over the ski gear including something new called a trick release. He explained it was the best invention yet!  It releases the rope from the boat or better yet the saddle, so you don’t get your leg ripped off and the horse won’t get tangled in the rope. Scarpa showed me how to release the rope. It was a simple pull of a string that I would hold as I galloped along the lakefront. Anybody that has been around horses knows that if a horse really freaks out, you deﬁnitely don’t want to be on the wrong end of the hoof.

We were set! Sunkist was feeling good and a bit antsy. She knew she was about to perform and she was literally rearing to go. I pulled in on the bridle gently repeating, “Easy does it... Whoa”...and patting her neck. I turned back, looked at Scarpa and yelled, “You ready?”

With the trick release in my left hand, I squeezed my heels into Sunkist’s side, loosened the reins and leaned forward all at once and Sunkist shot forward like a bullet.  Zero to thirty in about a second. At least it seemed like that to me. We were galloping down the lakefront and Scarpa was all over the place barely hanging on. His right ski was in the air and he looked off balance with the left ski. I leveled her off to an easy canter and watched Scarpa get used to the slight back and forth rhythm of the rope from the movement of the horse. He ﬁnally gave me the one handed thumb’s up and pulled away from shore toward the middle of the lake. We ran along the edge through the shallow water as Scarpa got used to this “ﬁrst” for all of us.  We started and stopped a few more times and he was having a good old time cutting back and forth through the water doing tricks on the skis. We did this for a week or so each morning and it was a lot of fun. I wished he could ride and I could ski but his level of riding didn’t match his world barefoot champion status! So we continued in our roles.

One afternoon, Scarpa drove up our driveway with a sly look on his face.  He had news!  Mountain Dew wanted to make their horse skiing into a national TV commercial!  This was a big deal, they had a new campaign with kids doing crazy fun things and they want to use us and the horses and they wanted to shoot it in Winter Haven. I couldn’t believe it.  Now I knew what Scarpa had up his sleeve with all this fun we had been having lately.  They called the campaign “Dew It Country Cool.”

A few days later, a team of people showed up in a 12-passenger van. They all introduced themselves but heck, all I heard was director-producer-camera the rest was a blur. We walked them over to the lakefront and showed them what we did. Sunkist and I were at a full gallop when Scarpa jumped out of his skis on his bare feet. He went ﬁfty yards and let go. He was barefooting in 2 feet or less of water. He was a nut… I mean crazy. The next run I galloped past the whole crew of people and whipped Scarpa right towards them. As I turned Sunkist back towards the crowd I saw him ski right up to them and pop out of his skis running and then take a bow. While I galloped up they were clapping and clearly impressed. I remember the Producer faking a southern accent saying,  “If that ain’t Country Cool I do not know what is.”

Everyone laughed. Scarpa, Sunkist and I were doing our best to catch our breath. The producer told us we got the job and had a lot to do.  They asked to use a spot on the farm as a casting center and that some people from New York and LA would be calling us soon to coordinate everything.  As they were leaving, the producer gave Sunkist a hearty pat on her neck and looked toward me and said, “You can really ride a horse Nando. Do you like Mountain Dew?”

“Yes sir!” I answered.  He told us to keep up the training while getting a couple of other horses trained to do the same thing.  The horses would get tired with a ﬁve day shoot from sunup to sundown.  They asked me, “cowboy Nando” if I would have a problem with that and I said,  “No sir I will not.”

Three weeks later after all the New York and LA phone calls and castings at the farm were finished, we were ready to start ﬁlming.  5 a.m. came early that September day. It was always the coolest just before dawn and getting up a little while before the sun was tough. The excitement of the day wouldn’t wait. As the darkness was lit by the early morning light I saw a good hundred people out on the lakefront.

The next five days were controlled chaos. Snacks and plenty of Mountain Dew to drink everywhere. We had used up Sunkist’s endurance and switched to our other horse Mullikin. Mullikin was stubborn and at times really lazy. His personality was of a grumpy old man but if you could get him going he was a dream to ride.  We continued with more hard riding, water skiing and this incredible ski jump that Scarpa did.

The famous “drinking of the Mountain Dew” shot was next and I had ﬁgured it was a piece of cake. Drink up, get the shot and move on. Boy was I wrong. First I drank on the back of the horse chugging a 12 ounce specially made bottle just for the shoot in one take. Then they said do it again and again and again. After that I raised my hand to hold on.  “How many times are we going to shoot this of me drinking?” I asked the director.  “As many as it takes son, so drink up. Got it?”  ”Yes sir.” I answered.  “Oh and Nando, quit drinking them down. Just ﬁll your mouth up and spit it out when I say cut. Got it son?” The light bulb went off in my head like in a cartoon and I said. “Yes sir, I got it!”

The commercial ran world-wide for a year, and there was a print and billboard campaign to boot! At that time, Dirty Dancing was such a success that they decided to do something that had never been done before. They put the Mountain Dew commercial at the beginning of the VHS tape. You had to watch the commercial ﬁrst, and it was ﬁlmed right here in Polk County in 1987.

Another neat thing was that a little known actor at the time was ﬂown in from Los Angeles to be the other main actor. As we visited between takes he assured me that he was going to make it big in the ﬁlm industry. I had told my mother that. She said, “You mean that scrawny kid over there? You must be kidding!” Boy was she wrong. Brad Pitt did make it big. I have not bumped into him again since, but when I do I am sure he will remember his time here in Polk County.

Coffee and Health: Myths vs. Science

In this first Summer Series, we’d like to demystify some of the latest, scientific findings …

When you think about your own mental health, self-care may not be the first thing that pops …

This past November, having just wrapped a film in NY I found myself sitting wide-eyed starin…