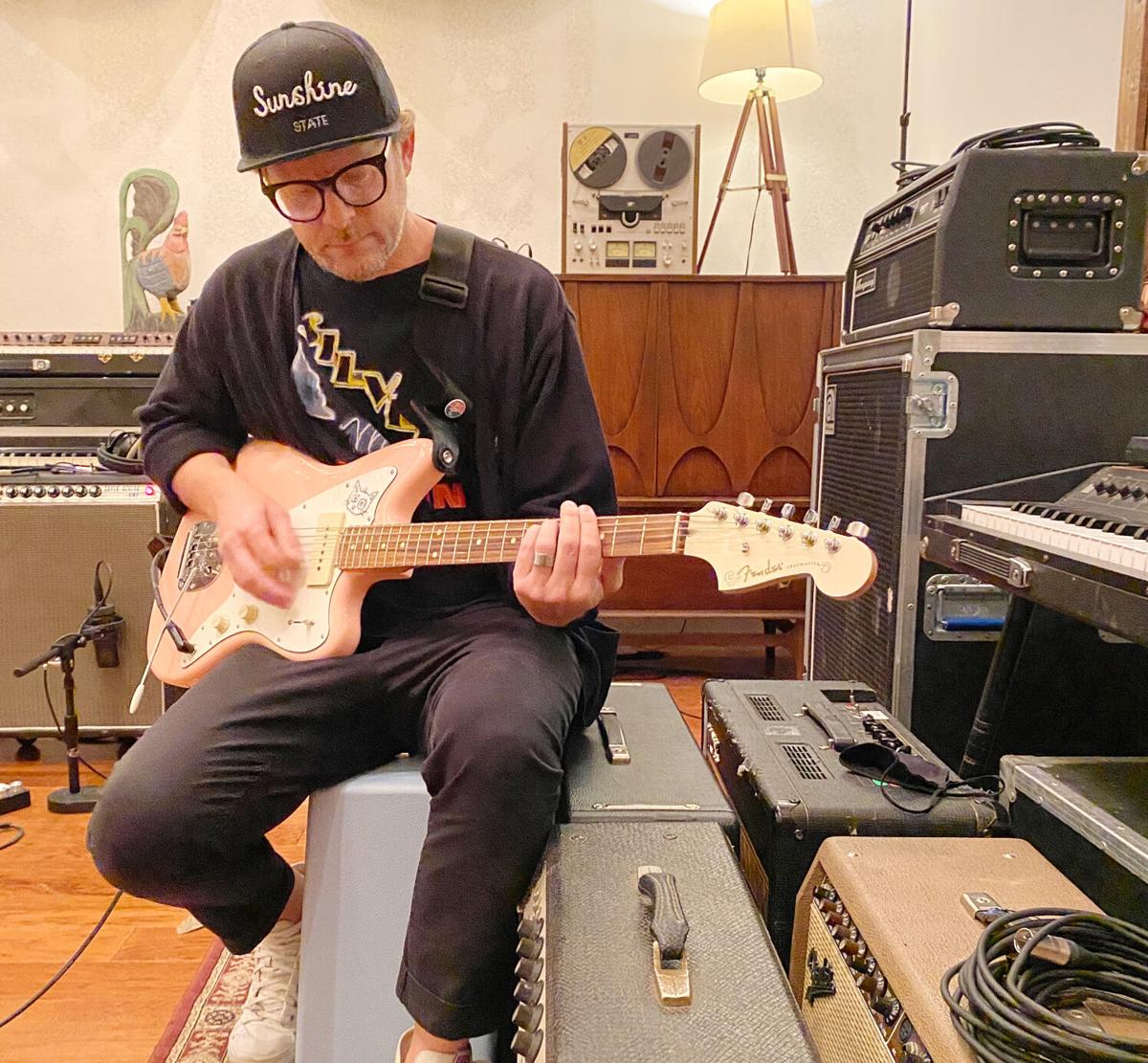 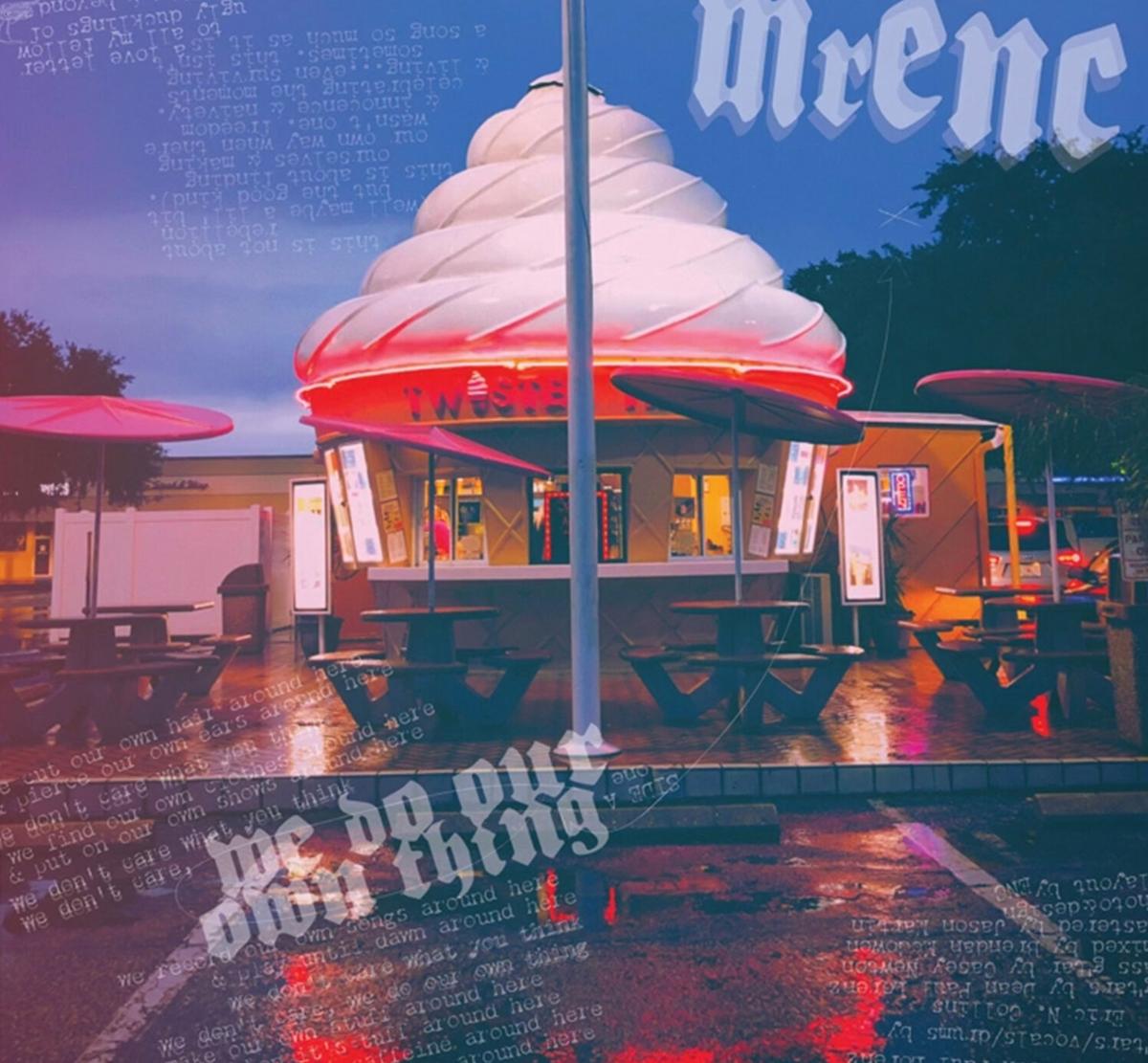 Eric Collins is a graphic designer by day, musician by night (and the rest of his free time). Born in St. Petersburg, Collins moved to Lakeland when he was five. Now married with two children, Collins has been here ever since. The MrENC frontman released his latest EP, “We Do Our Own Thing,” earlier this year. The 4-song EP is an ode to growing up in Lakeland and the area’s creative renaissance. We sat down with Collins at The Vanguard Room to talk about early influences, musical evolution, and nostalgic lyrics.

“As a kid, my mom raised me on classic rock,” he said. As he grew, the rhythms of Led Zeppelin turned into hip hop and rap in middle school. Influences from artists like Public Enemy have carried over into his “grimey anthems dripping with salty alt-rock garage-y grunge vibes or whatever.”

“Their production was a lot of sampling noise and jazz records,” he said of the hip hop group. “That has carried over into my music too because I still like to make noise textures with feedback and distortions.” It wasn’t until high school that he got into more alternative and grunge. Collins talked about meeting his wife, Carla. “She had way better taste in music than I did, so she was introducing me to punk bands, and we were discovering other bands together.”

Other influences for MrENC (standing for his initials: Eric N. Collins) include The Smashing Pumpkins – who he connects with, from their lyrics down to guitar tones. The ‘space rock’ subgenre sounds of Failure and Hum inspired Collins, too. He liked the flow of their songs and album arrangements, creating a mood.

Collins played trombone in school but found his way musically through his mother’s acoustic guitar. In high school, he started messing around on her guitar more seriously. “My dad went and bought me this guitar chord poster from the mall,” said Collins. “I had it on the back of my door, and I’d sit on my bed, learning how to move my fingers and play chords and writing terrible songs.”

From Garage Band to Touring the Nation

Towards the end of high school, he started playing with a few buddies – one played drums, another bass, a friend of a friend playing guitar. “It was all these older teen kids that didn’t know what we were doing,” he laughed. “Literally a garage band.” The band dubbed themselves Denison Marrs. “We would save up money and record locally,” said Collins. They recorded in a building behind Lakeland Square Mall.

“We recorded the tape in his funky little building, and then we made cassettes. We’d go to Walmart and buy holographic wrapping paper and cut it and fold it into the cassette and write our names on it,” he said. They would print and cut lyrics and put them in the cassettes that they would sell at shows. Denison Marrs did this until they could afford to press CDs. They continued to grow musically and eventually landed a record label and got to tour the nation. The band amicably broke up circa 2004, according to Collins.

Following Denison Marrs, Collins and his brother-in-law, Dean Lorenz, wrote and demoed an album that also got a record deal. They were set to go on tour with their band, The Dark Romantics, but the bandmates didn’t want to leave their wives behind. So, Carla learned bass, her sister Amanda, keyboard, and a friend on drums joined the tour. They still look back on it and laugh, said Collins. “They could all play the parts perfectly [to their songs], but they couldn’t play any other songs. […] I thought that was so cool. That’s the most punk thing to me,” he said.

The band put out a couple of albums and toured between 2006 and 2009, according to Collins.

Craving a creative outlet to make and play music, Collins started MrENC at home. “I started doing a song at a time, releasing it online, and started to grow again,” he said. He worked with New Granada Records out of Tampa to put out a few 7-inches, cassettes, and the first two full-length albums. The early days of MrENC were Collins playing every part and instrument needed to create a song from piano to guitar.

Missing the band element, he invited his brother-in-law Dean to play drums with him along with other musicians. Collins appreciated having his friends and other local musicians involved. Lorenz currently plays guitar for MrENC, and he and Collins write songs together. Another contributor to the band is Casey Newton, “awesome bass player” and studio manager for The Vanguard Room. “They’ve always been so kind and honoring to me here,” he said of The Vanguard Room owners.

Collins and Newton worked together on a song for The Vanguard Room’s 2019 Christmas album, “A Lakeland Christmas.” The two became fast friends, and Newton joined MrENC on bass.

Thinking back to the earlier sounds that MrENC put out, playing all the instruments himself, Collins said, “I was missing people, missing their input and really their creativity. When it’s just my mind, I feel like everything starts to be the same for each song.”

The Evolution of MrENC and his ‘Grimey Anthems’

Like any good artist, Collins has had a musical evolution throughout his career. From the ‘big alternative’ and ‘space rock’ sounds of Denison Marrs in the same vein as The Smashing Pumpkins and Deftones to the ‘darker New York style’ of The Dark Romantics, similar to the Yeah, Yeah, Yeahs and Interpol. “I’ve always maintained the alternative vibe, but stylistically I like to try new stuff and try to progress and push myself,” he said.

Of his earlier MrENC music, Collins said, “It was a little more artsy and a little more surf, spy guitar […] The tones and the drums were more stripped down.” That stripped-down sound got bigger and bigger as more artists got involved.

Collins returned to that big alternative rock vibe on his 2019 EP, “On and On and On,” and his most recent EP, “We Do Our Own Thing.” A friend referred to these songs as ‘grimey anthems,’ he said, because, “They’re so big and noisy and fuzzy in tones. They’re so big and loud.” These recent releases were inspired by the likes of The Smashing Pumpkins, Sonic Youth, The Breeders, Yuck, Nothing, and Starflyer 59.

‘We Do Our Own Thing’

For “We Do Our Own Thing,” Collins wrote songs and lyrics before he started demoing them. He said, “I was more focused on the plan and idea, the theme that I wanted to go with.” Over the last few years, Collins noticed what he called a kind of ‘renaissance’ or ‘rebirth’ on the Polk County art scene. From music to visual artists and everyone in between, “I’ve noticed the way that everyone is trying to collaborate and push each other, and trying so hard to do new stuff,” he said. “That’s how culture is built. All creatives are trying to do something and build something. Then it all finally starts to grow together.”

“I really wanted to do music that throws back to that but is also still progressing. Lyrically, I want to write about my memories coming up in Lakeland and around Polk County, but then also mix in what I’m seeing other artists doing,” he said.

Back in the day, Collins said, “There was definitely a divide between the adults and the kids. […] We put on shows anywhere we could.” MrENC says the tides have shifted, and he’s observed businesses and venues being more open and supportive of local art and music. “I wanted to write about it. I wanted to mix my nostalgia and reminiscing with what else I’m seeing going on.”

The EP’s lyrics, Twisty Treat album art, and music video imagery are an ode to what Collins thinks of when he reflects on his time growing up in Lakeland – he and his friends cutting their own hair and piercing their ears with safety pins, thrifting for clothes at the Salvation Army, going to Twisty Treat after a football game, Silver Moon Drive-In, Southgate Shopping Plaza. All things that are now special to his kids and their generation. “It was me reminiscing about nostalgia, but I didn’t want to lean too heavily on that like a gimmick. I wanted to make sure that I married it with the new generation and what they’re doing, what they’re looking for, what they’re going through and experiencing,” he said.

“We Do Our Own Thing” is an EP in homage to the artists and the art – for Collin’s generation and his daughter’s. He described the last track, “All This Time,” as “a light-hearted love song for music in general,” saying, “It’s brought me so much joy and connection – music has – with people around Florida and the nation. Music has blessed me with so many friends and relationships and experiences and adventures.”

You can pick up “We Do Our Own Thing” on 7-inch vinyl at Jesse Carl Vinyl in Lakeland or online. Beyond promoting this latest EP, MrENC is recording three songs for their part of a six-song, split 10-inch with The Night Thief, a band out of Los Angeles, from Lakeland initially. That project is expected to come out in late 2021 or early 2022.

Though MrENC won’t be doing any heavy touring anytime soon due to the pandemic, you can catch them for a free show at Rock the Park at Curtis Hixon Park in downtown Tampa on Thursday, June 3 at 6:30 pm. The band is heading to Birmingham, Alabama, to play Furnace Fest in September. Later in the year, Collins says he’s open to the potential of a series of mini-tours to places like Savannah, Asheville, Nashville, and Atlanta.