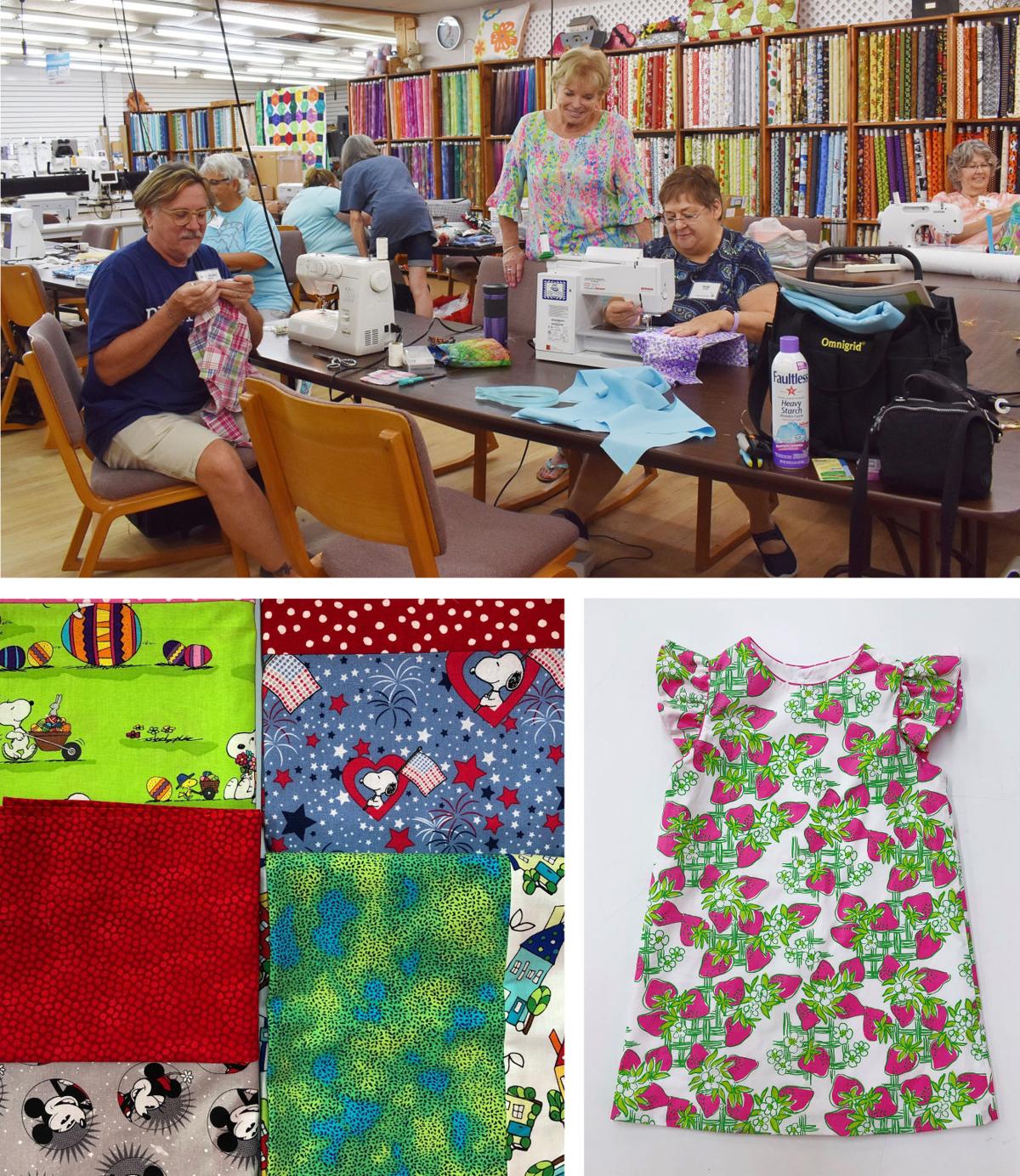 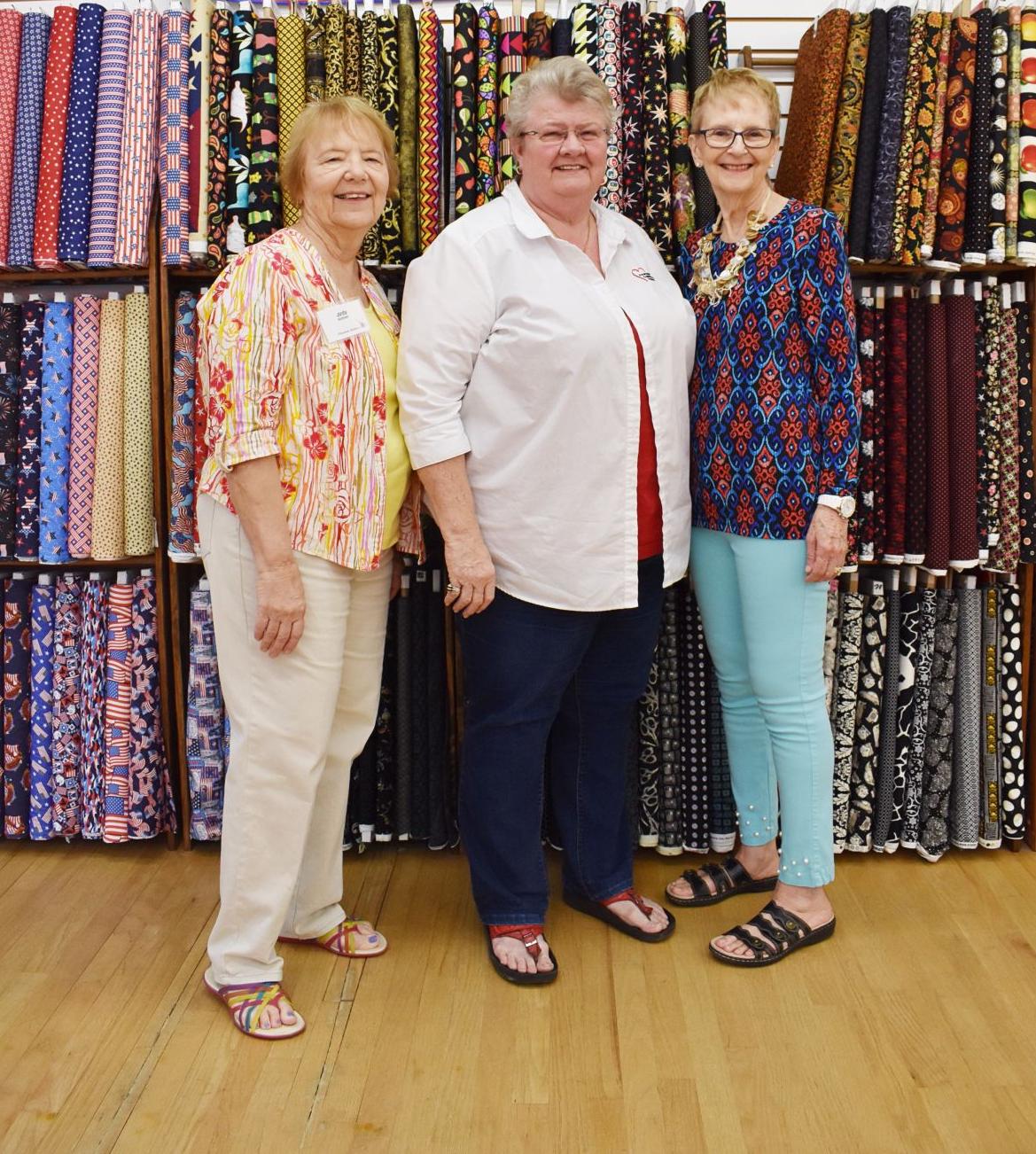 On the last Saturday of each month (except in November and December) a special group of women meets at Heartfelt Quilting & Sewing in Winter Haven to use their talents for a good cause. The store was started by Tom and Pat Roberts. Pat Roberts started sewing as a child and began working at her first fabric store on her sixteenth birthday. She started Heartfelt in 2005, before that she had a business with a partner for five years. She has been selling sewing machines for 45 years and fabric for 50.

With a heart for the cause, Pat welcomed the group to meet at her store, free of charge to work on their charity projects. “Pat has opened her heart and her doors to all of us,” said Crossroads Stitchers, Chapter Leader, Margaret Travis. Judy Buchner, a member of Crossroads Stitchers and Ryan’s Case for Smiles agreed.

Crossroad Stitchers is a four-year-old chapter of Florida Sewing Sew-ciety (FFS) with 29 dues-paying members, according to Travis. In addition to their own charity works, the group collaborates with Ryan’s Case for Smiles to make pillowcases for children in the hospital. Crossroads Stitchers has donated over 200 pillowcases to the Orlando Chapter of Ryan’s Case for Smiles.

Buchner told the story of how Ryan’s Case for Smiles got its start – with one mother making pillowcases for her son. Cindy Kerr started making pillowcases for her son Ryan during his cancer treatment. It made Ryan so happy that Cindy decided to extend that joy to all the children in the Oncology Unit at Children’s Hospital of Philadelphia. According to their website, “Case for Smiles has grown into an international movement that has 120 chapters throughout the US and Canada.”

Buchner belongs to the Orlando chapter of Case for Smiles. “We deliver 750 pillowcases a month to Orlando area hospitals,” she explained. The group buys the fabric, cuts it, constructs pillowcases, washes and irons them before delivering them to hospitals around Central Florida. In September, the group did a large push for Pediatric Cancer Month and made over 4,000 pillowcases.

Every Little Girl Should Have a Pretty Dress

Ryan’s Case is only one of the many ways Crossroads Stitchers and Heartfelt are using sewing to positively impact the community.

The newest initiative of Crossroads Stitchers is called “Every Little Girl Should Have a Pretty Dress.” The group is sewing dresses to be donated to little girls at The Mission in Winter Haven. Roberts said she has done something similar with another group in the past with dresses that went to Romania.

“We wanted to do something here, that stayed locally,” she said. Local little girls will receive a handmade dress that was sewn with love, especially for them. When we spoke with the group, a member of the FFS Chapter in Palm Beach County, Edie Townsend was there to teach the Crossroad Stitchers how to sew garments. Townsend said she tries to teach at least one garment sewing class a year. “Some of our non-garment sewers have become very prolific at making these clothes,” she said.

The significance this one piece of clothing will have to an underprivileged little girl isn’t lost on the sewing group. Travis asked, “Don’t you remember your favorite dress when you were growing up?”

What do they hope the little girl feels when she wears the dress? Judy Buchner said she hopes it makes them feel “twirly.” Tears welled up in Roberts’ eyes as she said, “That she knows she’s loved – that somebody thought enough of her, to give her a dress.”

Townsend hopes it will boost their self-esteem and said she feels blessed to help. She said, “You feel good because you’re presenting it to someone who needs it. The person who receives it feels good because someone thought enough of them to do something for them.”

In her work with Ryan’s Case for Smiles, Buchner said she recently received a note about a mother who had to take her child to the hospital in an emergency, unable to bring anything. “The child got a pillowcase and the mother was so relieved that there was something that belonged to that child. The mother had almost as much benefit from that pillowcase,” she said. “I think the same thing is true with this.”

Travis said this is the first time they’re making dresses for little girls locally, but that they hope to continue and expand the project next year.

Additionally, the Winter Haven sewing group donates dog beds to the Humane Society of Polk County with scraps from other projects so that nothing goes to waste. Small fabric hearts that they call “Hearts of Love” are donated to Advent Health’s NICU units. Travis explained that premature infants have a tremendous sense of smell. “If the mother puts this little heart near her and rubs it on her skin, they put it in the incubator so the child has the smell and it helps with her lactation,” she said.

Roberts said that once someone takes a class to learn how to use longarm quilters, they don’t recommend starting with a large, expensive project. To give them more experience, they have the students sew charity quilts that are donated to the sheriff’s office. When they have their quilt machines on display at shows for folks to try out, they use those pieces for dog blankets to be taken to the local animal shelters.

The women all agreed that sewing was a source of comradery, creativity, and companionship for them. “I think most importantly, it’s a way to give back,” said Buchner. “We can teach anybody to do this and feel good about what you’re doing for your own community.”

The women encourage anyone reading this to come in and help. They can teach you how to sew or you can help in other ways like ironing, folding, and bagging the items. Their next meeting at Heartfelt Quilting & Sewing is set for the last Saturday in January.