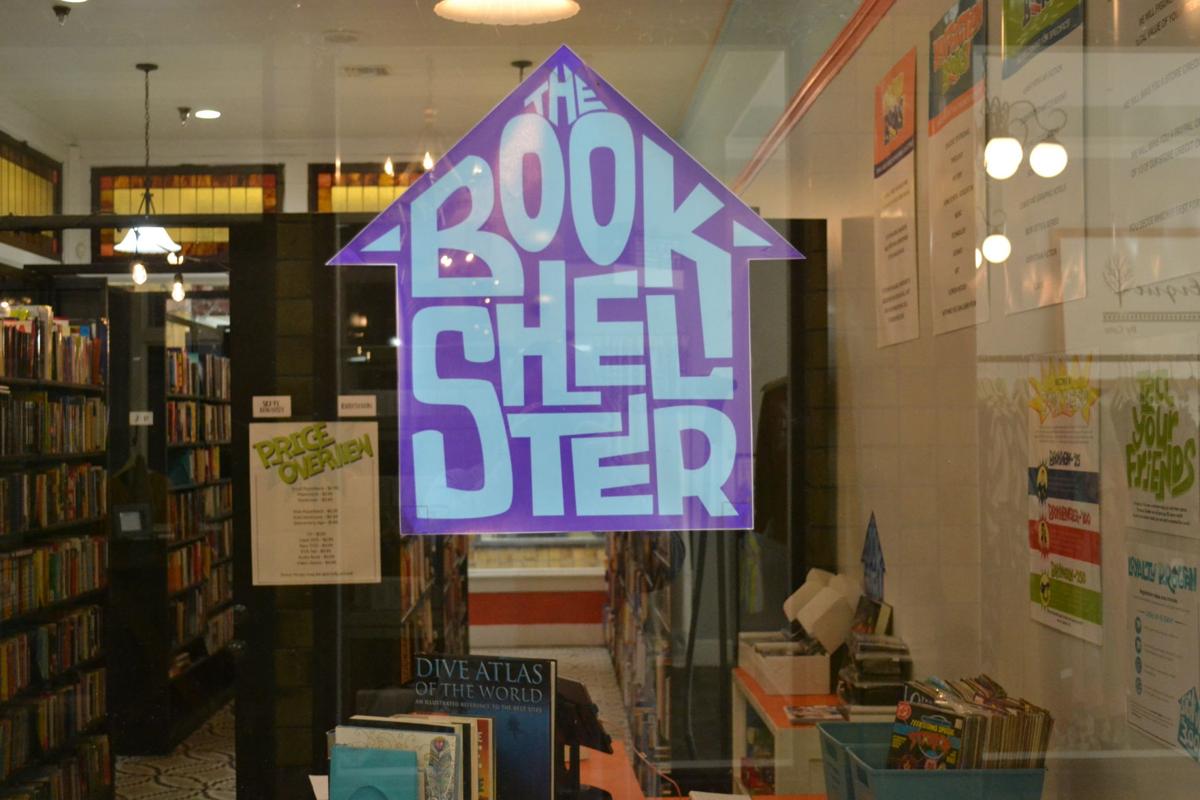 In March of 2018, husband and wife entrepreneurs, Sam and Jacqui Terry opened a small used book store in downtown Lake Wales. You may have seen the sign on the roads around town, “The Book Shelter, Google It!” That would be them – a charming storefront nestled in the Rhodesbilt Arcade. Their name, The Book Shelter, pays homage to their mission – to save used books.

Sam Terry moved to Lake Wales from Kansas in 2009. With a degree in Sports Management, he pursued an internship at the local YMCA. While in Lake Wales he met his now wife Jacqui.

During his internship, he decided he wanted to make a little side money and started selling books online. He has since turned his side hustle into a business selling books on Amazon.

TURNING A PAGE WITH THEIR BUSINESS

With rising Amazon seller fees, he was having to pass on selling books that were very popular but wouldn’t be profitable online. “We knew they were books that people still wanted, so we decided to start a book store,” he said.

Almost a decade later, Sam and Jacqui have four children and a budding used book store.

In a time when big box stores and online giants seem to be pushing local stores by the wayside, Sam says he disagrees with the notion that bookstores are a dying breed. He’s found the recipe for success, saying, “The cool thing for us is we’re not really competing with Amazon.”

They still sell books on Amazon and The Book Shelter seems to be a way to fill a community need for in-demand books, and a way for Sam and Jacqui to supplement their Amazon business – a perfect marriage of online and retail.

As Sam talked about his business, his customer-centric attitude was apparent. He kept describing his customer base as his “tribe.” He explained, “Our tribe at The Book Shelter are those customers who feel like the store is “their store.” They tell their friends, they come just to hang out. The store has become a relationship, not just a place to shop.”

Discussing just how he’s been able to build his “tribe” of customers, now over 1,000 accounts at the store, Sam referenced Seth Godin’s book, Purple Cow: Transform Your Business by Being Remarkable, saying, “It’s all about being unique.”

Going into it, Sam and Jacqui knew they wanted to take the Purple Cow approach to make The Book Shelter remarkable. To get people talking about their new store, they became specific with what they stocked, lining the shelves with over 10,000 popular, sought after books.

They’ve put customer appreciation at the core of their business. Along with weekly deals on their Facebook page, they have a program called The Book Hero Academy for elementary school students. Students can get a book from the store for free. After they read it, if they post a video book review on their parent’s Facebook page, they can return to The Book Shelter for another free book.

Patrons receive 5 cents back for every dollar spent, along with a referral program offering $2 posted to your account for every person you refer. If you find a book containing a bookmark with a silverfish character on it, you get that book for free.

If you’re looking to trade up for some new additions to your library, The Book Shelter accepts trade-ins as well. Currently, they are most interested in non-fiction, newer fiction, elementary, young adult and comics.

Another passion project of the Terrys’, outside of their literature-laden shelves, is a youth ministry slated to open downtown. A group of volunteers with “a passion to help teenagers” are working to have the youth center, called Gospel, open in March. According to Sam, “The focus first and foremost is the gospel. Our goal is to provide teenagers with a safe place to learn, create, hang out, and be loved. We will offer different groups for students to be involved in. Those will include Bible studies, creative writing, board games, basketball, video games, ultimate frisbee, art, and music.”

Sam feels strongly about the importance of this youth ministry, saying that there has not been one in Lake Wales for over five years. “In that time, we have seen a large amount of teens who are living with very little support from parents or families. Their lives lack consistency,” he said. “These kids really need something that they can count on. We want to provide a place where they feel like they belong and feel that even if life is crazy there are people who care about them, but most importantly that God cares about them.”

He is so committed to Gospel that The Book Shelter will be donating money to the youth ministry and may use their store to do on the job training. “We aren’t quite sure how they will fit together but they will be located right across the hall from each other so there will be a lot of interaction,” he said.

BANG FOR YOUR BUCK

Sam and I went on a hunt through the shelves to see how far $50 could get us. Their prices are as follows:

With this in mind, we tried to get a good mix of genres. A few minutes later, we met at the cash register with 19 books. The total came to $49.33, still some wiggle room for another kid’s paperback or two.

To see the latest weekly deal, follow The Book Shelter on Facebook, or stop in and find a real page-turner.

It was about this same time last year. The dog days of summer had just passed, and a smidge …

About 1,400 years ago, in an Ethiopian highland named Kaffa, a goat herder named Kaldi notic…