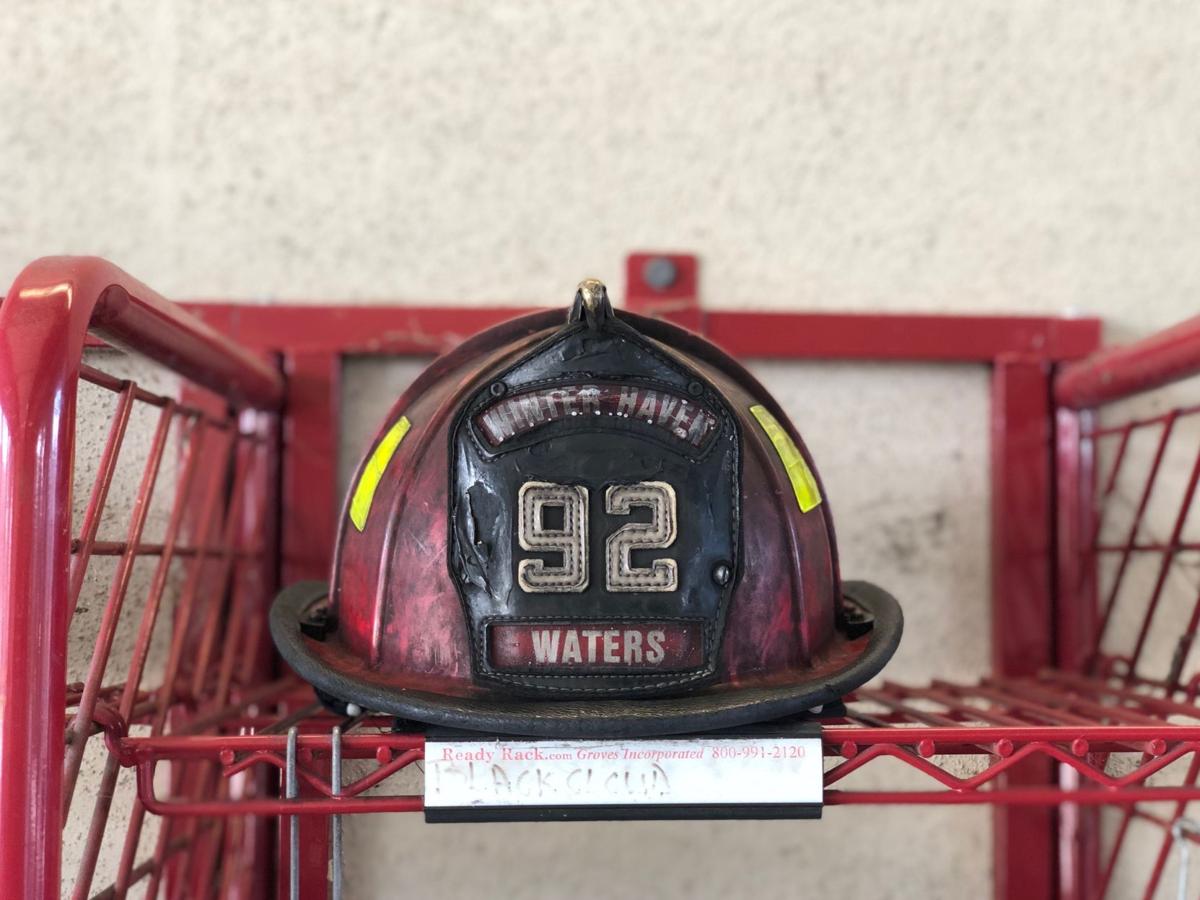 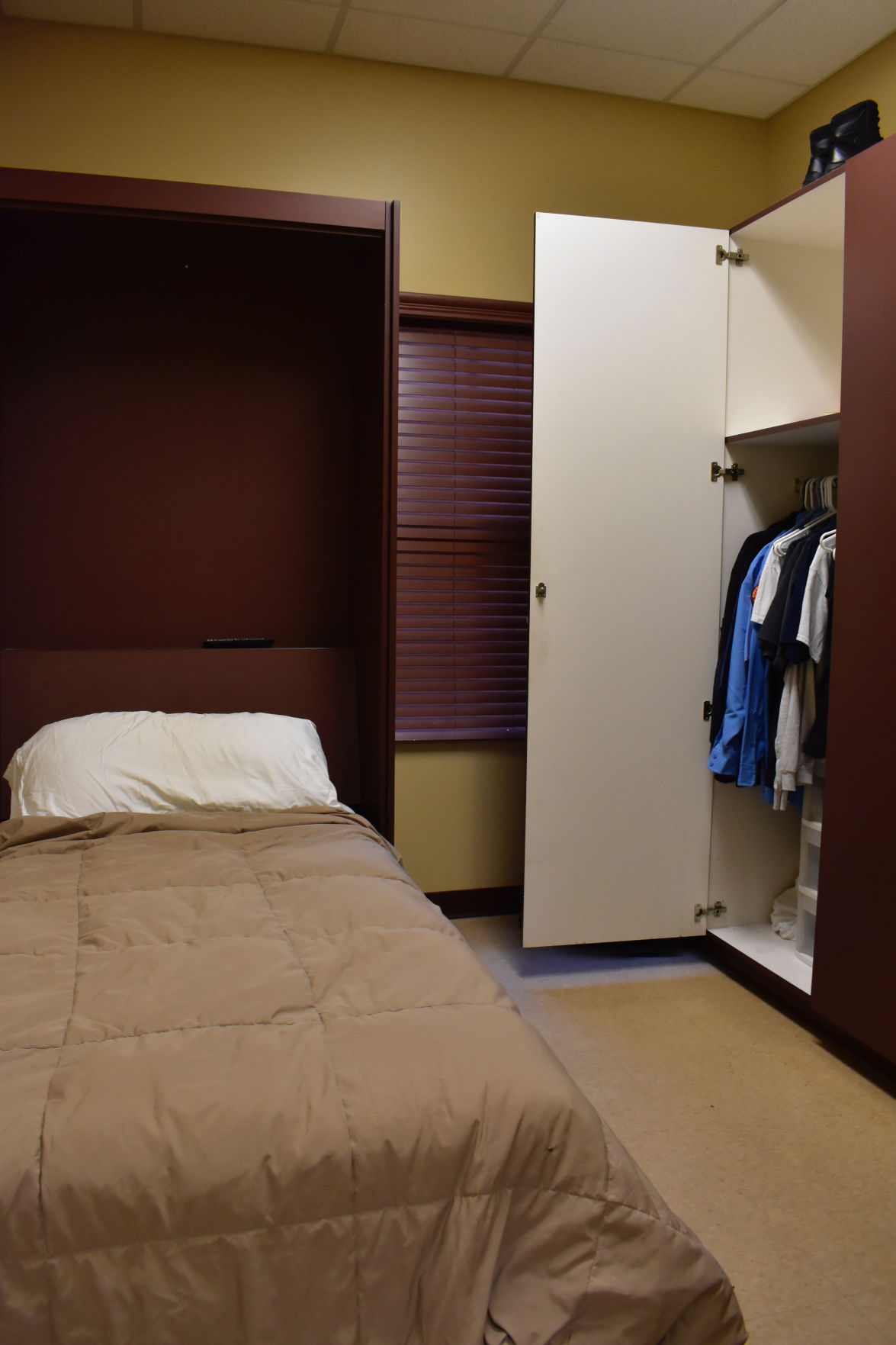 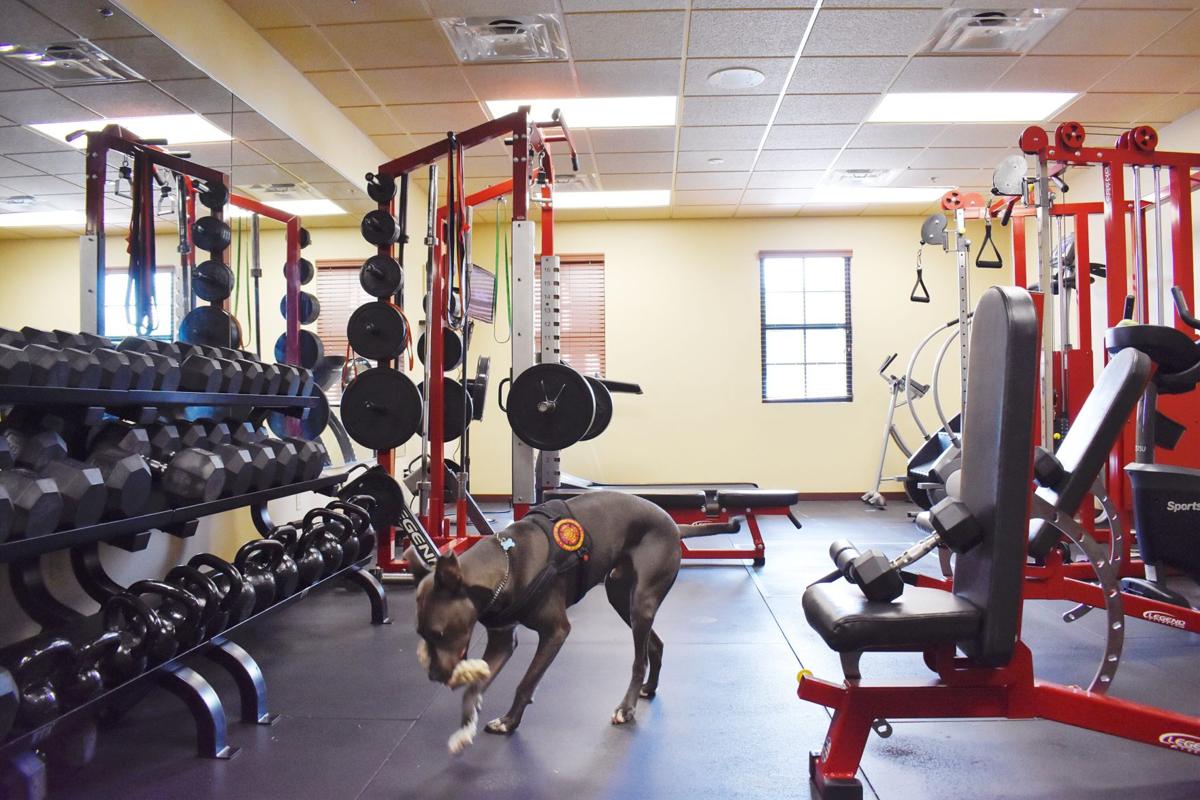 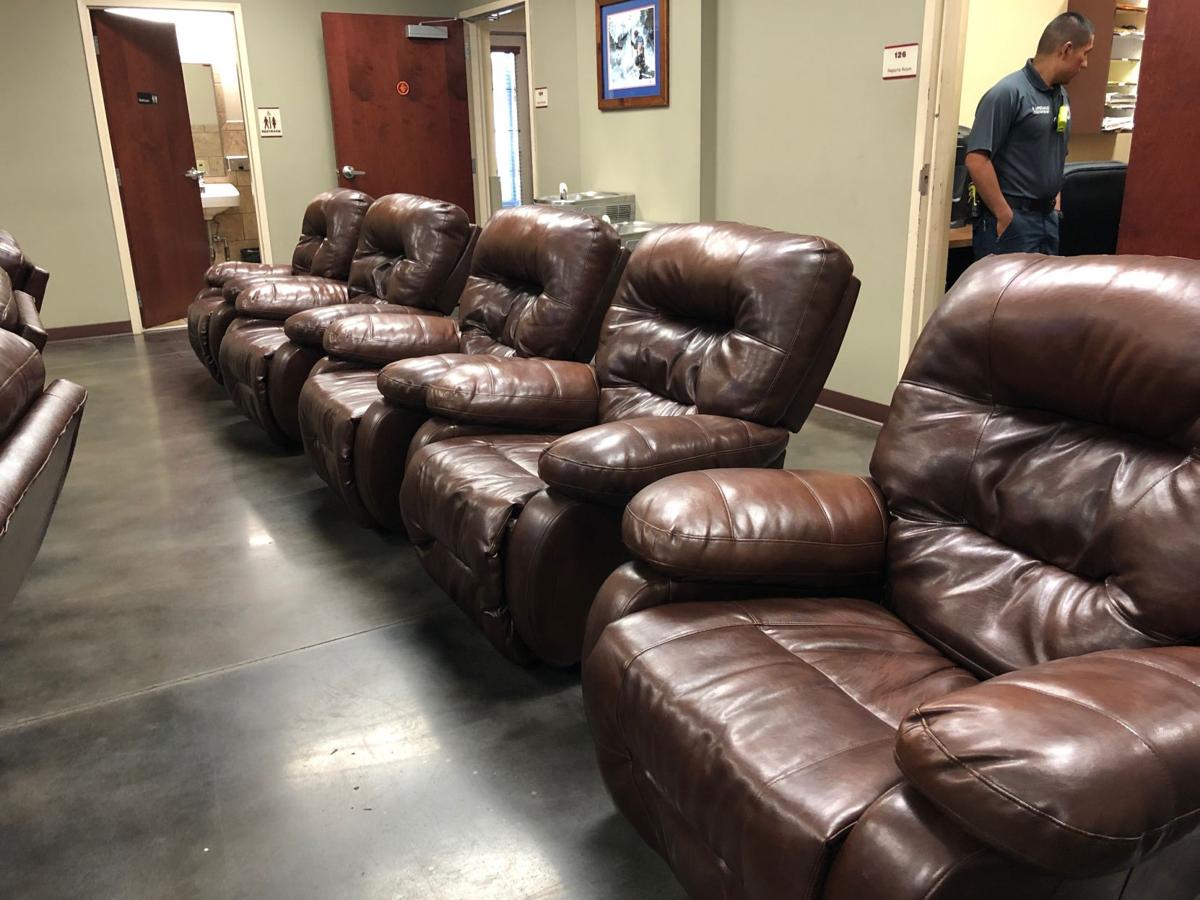 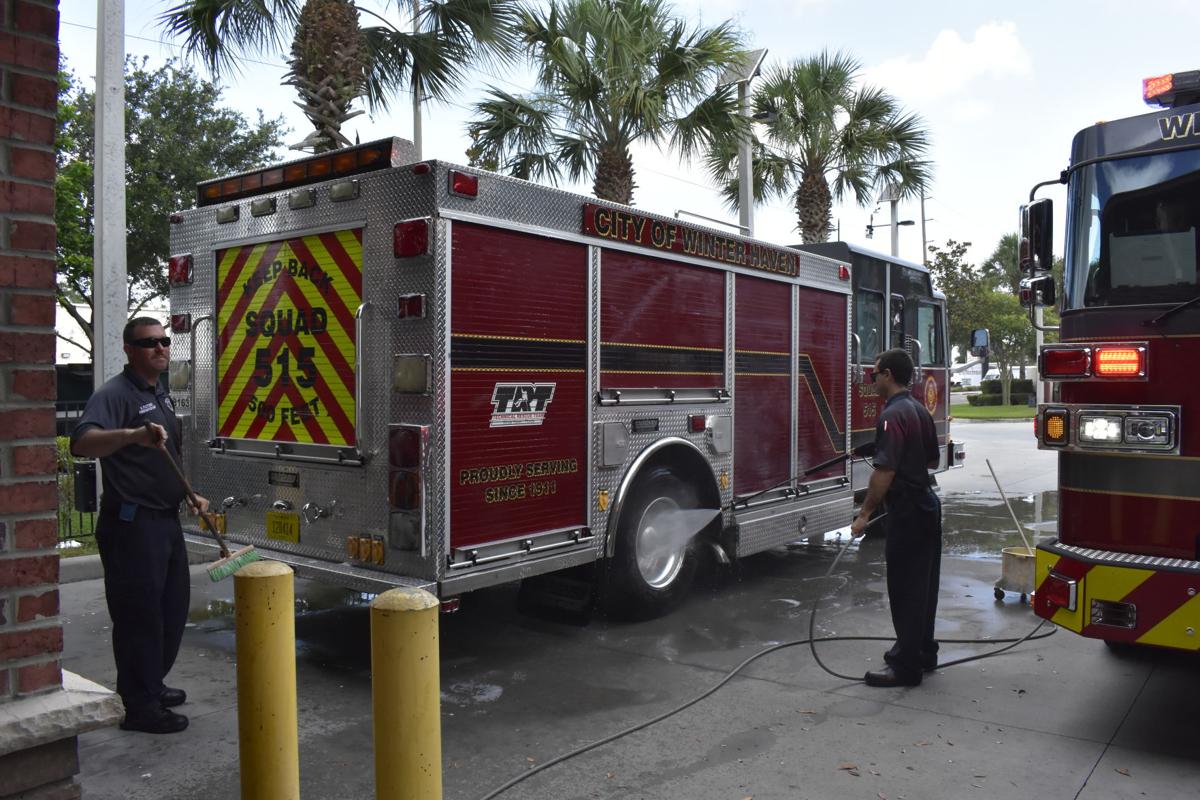 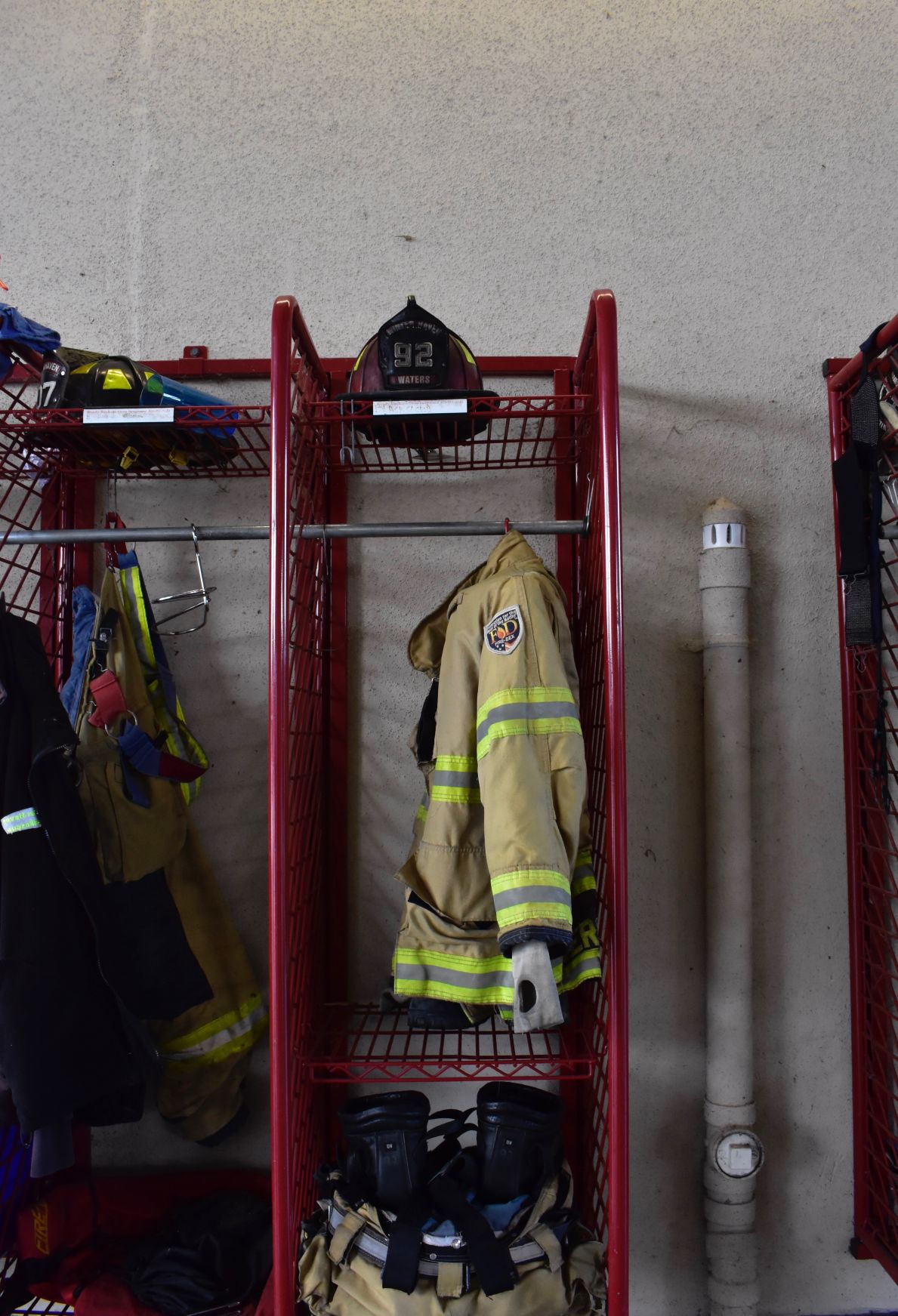 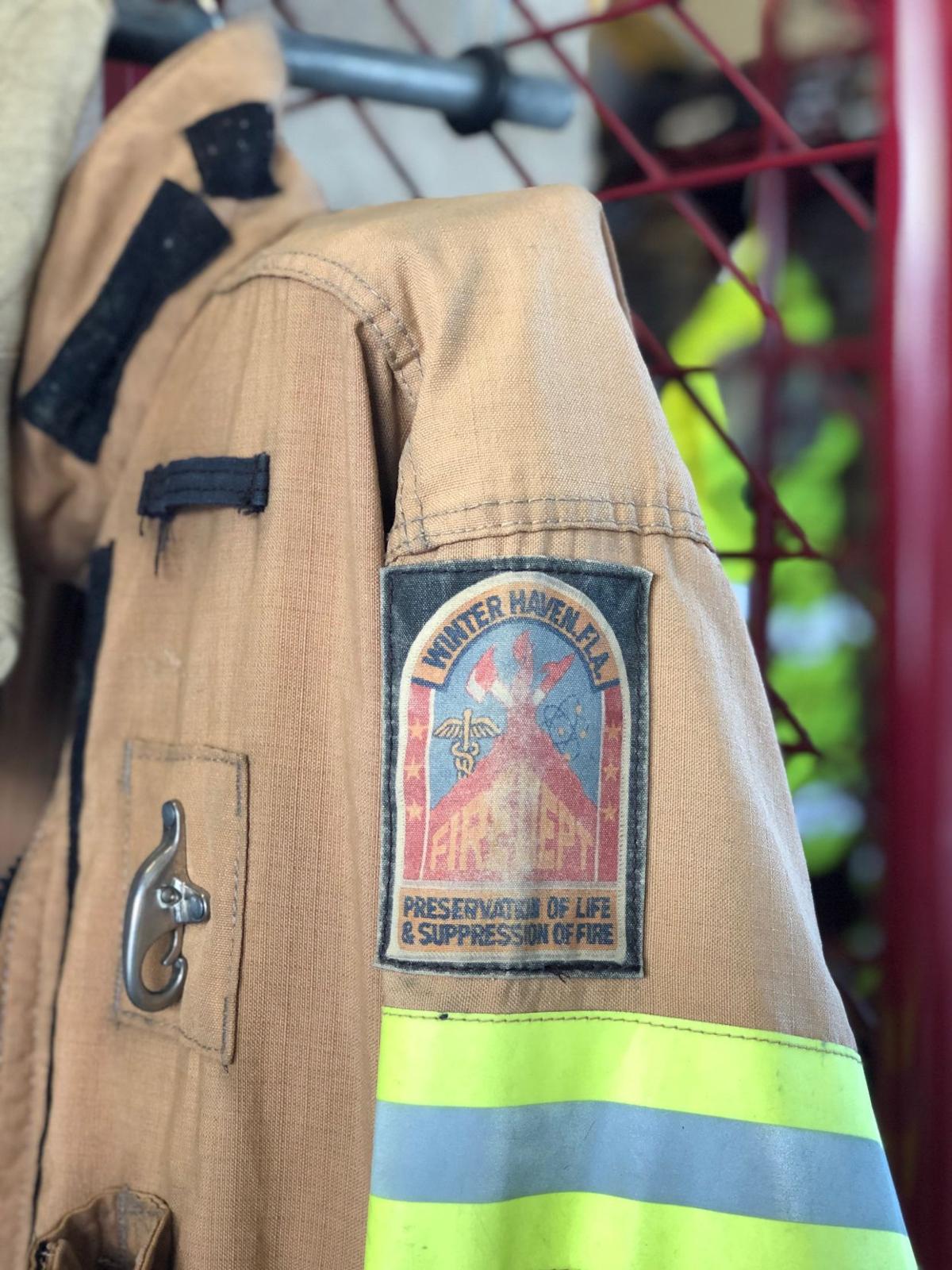 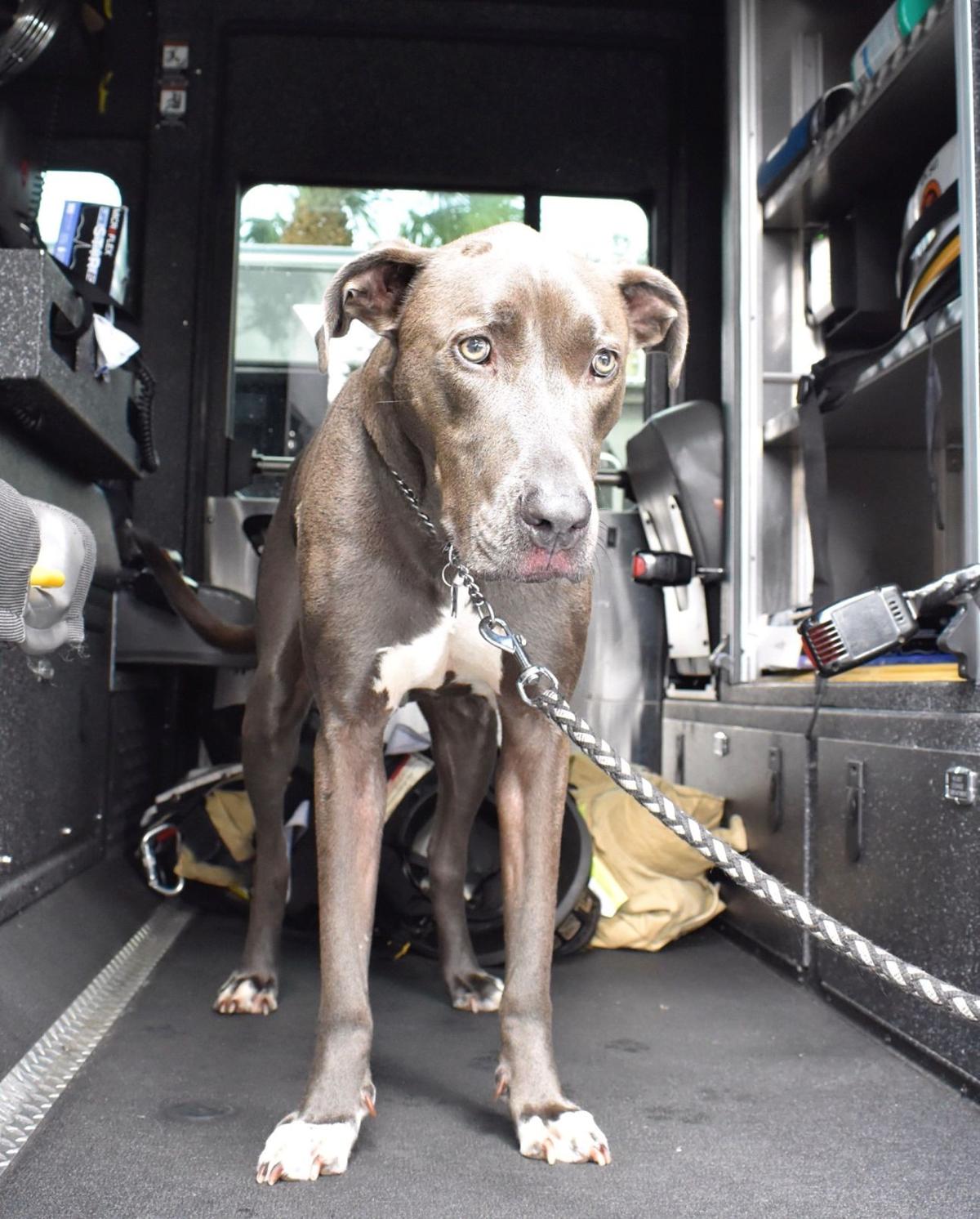 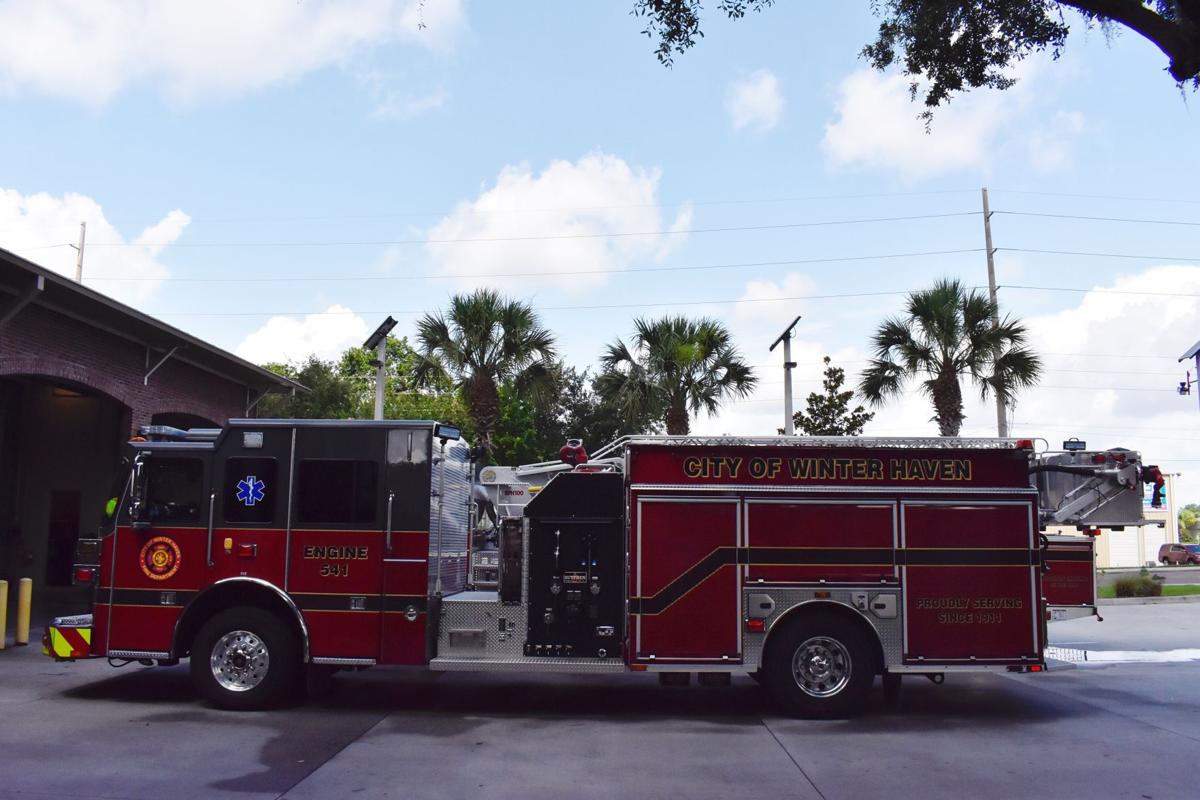 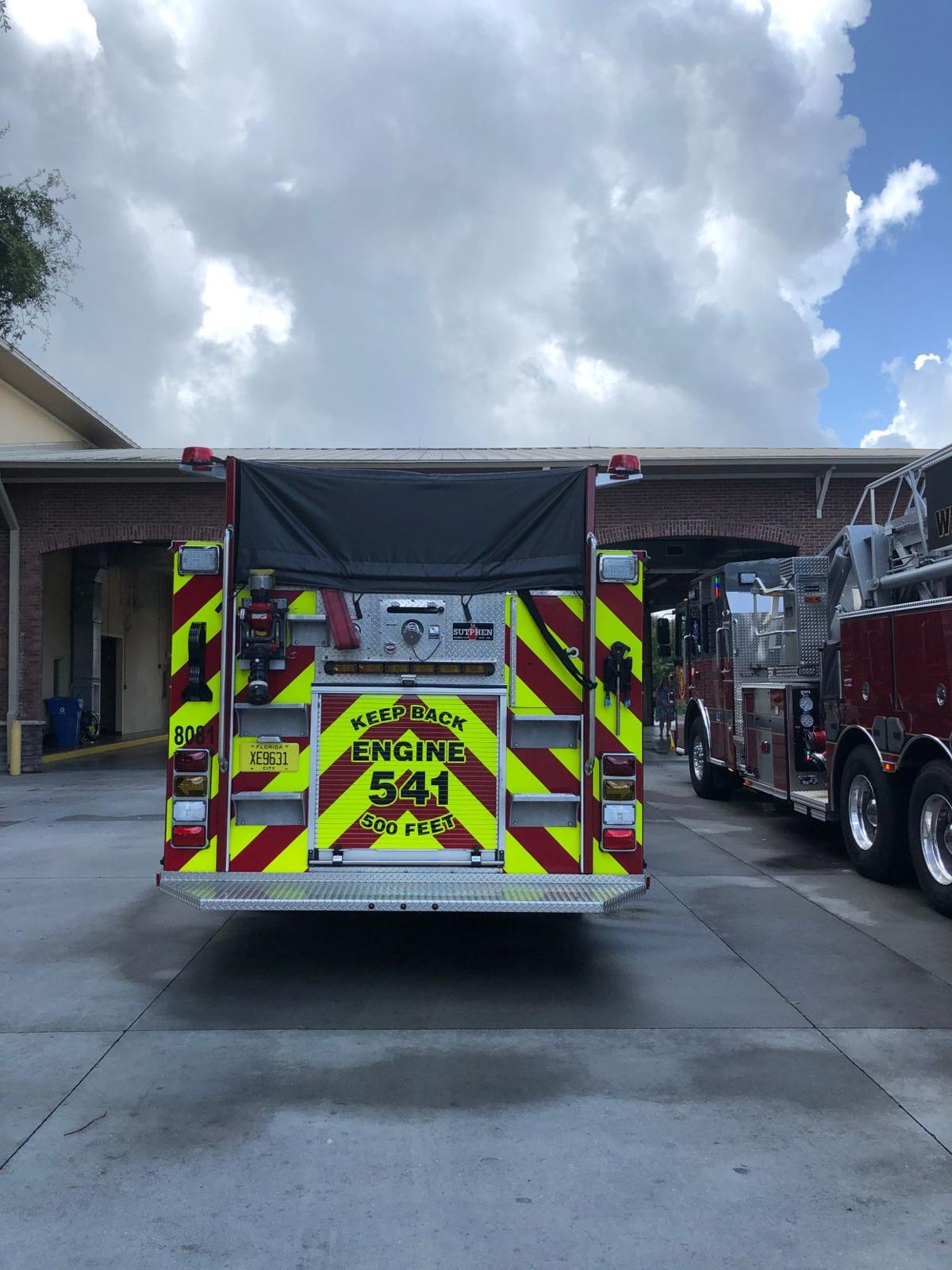 First, a big ‘thank you’ to the men and women of the Winter Haven Fire Department not only for their service but also for being so gracious with their time and giving us a glimpse into their world. Over the past several weeks, they gave us a tour of the station, took our editor up about 9 stories on their truck’s ladder, and let us ride along on a call. Talking with the first responders who put their lives at risk, spend 24-hours at a time away from their families, and work rain or shine to keep the community safe, they opened our eyes to just what goes into being a firefighter.

Not Just Punching the Clock

Safety and Training Captain Casey Dasher gave us a tour of the station and a detailed rundown of an average (if there is such a thing in this profession) shift. The station pup, a rescue Weimaraner/ Great Dane, Wesley also accompanied us on the tour.

As most of us are stopping for a coffee or rolling into work a few minutes late on any given weekday, the firefighters of the Winter Haven Fire Department have already begun their 24-hour, 8 am to 8 am shift. They are on call for the entirety of their shift. Whether in training, eating lunch, taking a shower, or sleeping – when a call comes in, they drop everything to respond.  They must arrive early for their shift to go upstairs to their bunks to change into their uniforms and be ready to take a call at 8:00 on the dot. The firefighters then head downstairs for their morning briefing.

Utilizing a video conference between Station 1 on U.S. 17, Station 2 on Lucerne Park Road, and Station 3 on Cypress Gardens Blvd., the Battalion Chief who is the commander of that shift, conducts the meeting. He will go over truck assignments, clean up duties, any training or public education events, goals or requirements of the day and any other news or happenings within the department. The morning meeting is also a time to review streets, policy, and protocol. Everyone on shift is assigned a station duty to keep the station, which is essentially their home away from home, clean and tidy.

One of the most critical parts of their shift other than responding to calls is the truck check. Every piece of equipment, medication, and device is checked to be up to date and in working order. WHFD Firefighter/ Paramedic Jessica Spell explained, “You make sure, even if you did it two days prior, that everything is exactly how you need it to be for whatever you may encounter in the next 24-hours.”  Captain Dasher explained that they have set detail days for the trucks on which the people on shift will do a deep cleaning of the engine’s cab and wash and wax the exterior.

One misconception we heard brought up repeatedly was that firefighters have a lot of free time on their hands when they aren’t responding to a call. This isn’t the case. Downtime between calls does not equate to free time for the firefighters. The time between 8 am and 5 pm is treated as normal business hours, with every firefighter doing something productive with their time.  The first thing you see when you walk into the station is a room of plush recliners facing a big screen tv which at first glance may propel this misconception. However, each time we visited the station for an interview or photos, not once did we see someone lounging. There were men and women training, writing reports, cleaning, detailing trucks, among other station duties.

To someone not familiar with the fire service, the thought of having to drop everything you’re doing, hurriedly jump on a truck to rush to someone’s aid might be anxiety-inducing. For these men and women, it is routine, down to a matter of focus and preparedness.

First alerted by a loud tone over an intercom system and on pagers they carry with them, Spell relayed, “You stop whatever it is that you’re doing. It doesn’t matter if you’re eating or if you’re in the middle of a shower – which has definitely happened to all of us at least once.”

“You get a general idea and whatever information you’re getting is based on a conversation that’s being had with someone over the phone and someone who is having the worst day of their life. Sometimes things get misconstrued, and sometimes things get downplayed or they’ll get blown out of proportion,” said Spell. “You take it with a grain of salt because no matter how good the dispatcher is, you never know exactly what you’re walking into.”

They take a small window of time, less than two minutes according to Captain Dasher, to get ready and on route to the emergency.  Spell admitted that when you first start off in the career, “You definitely get the jitters that come with it every time that the tone drops. It rewires your brain, it truly does. There’s a different psychology that comes with being a firefighter and being ready for anything at any given moment.”  Time on the job eases that adrenaline rush says Spell, adding that whether you’re a rookie or a seasoned vet, there is a systematic approach to how they handle a call.  “Part of being able to do that is being knowledgeable of whatever protocols, whatever the general guidelines are of medical care because you might have a set-in-stone way of doing things in the hospital,” said Spell. “But for here, we’re not showing up to an emergency room. We’re showing up to someone’s house or the side of the road or an ally.”

A call came for Engine 541. I climbed aboard the truck with Lieutenant Jason Ward, Firefighter/ Paramedic Wilder Rodriguez and firefighter Ronald Wright behind the wheel. Out of respect for the patient’s privacy, I won’t reveal the exact details of the call other than it was a “psychological” medical call. On route, I slid an oversized pair of headphones with a speaker over my ears – this is how everyone in the truck communicates. Lieutenant Ward read the CAD (computer-assisted dispatch) and gave a few more details about the situation and instructions to the others on board as to how to proceed on scene.

When we arrived Lieutenant Ward, while assessing the situation, began to build a rapport with the patient. This, he says, is a huge aspect of their job. An ambulance and a few police officers also arrived on the scene. Lieutenant Ward stepped away from the scene and said, “You notice I stepped out because there were a lot of people in there. It starts getting to the point that it’s overwhelming for the patient because everywhere he looks there’s another uniform. When you’re already in a sensitive state like they are, it’s really overwhelming.”

Consulting with the other first responders, the team kept the patient calm and determined what the best course of action would be. Once the scene was under control and their job was done, we headed back to the station where each firefighter on the truck would fill out a report detailing what happened.

Obviously out of the norm for me, the call was exciting, but witnessing someone else’s emergency was a bit frightening and sad at the same time. As for the firefighters, they had a job to do – one they handled with compassion and care for everyone involved. Each man on the truck displayed professionalism and level-headedness that seems singular to their line of duty.

First responders are indisputably heroes. But, if you don’t know one personally or have never been in the situation to need them, maybe you don’t know the extent of what they do.

I knew that for every car accident I saw, there was a fire truck. I knew that if someone left the stove on and caught their house on fire, they would be there to put it out. Television taught me that they slide down poles and eat a lot of chili.

Each person we met from Captain Dasher and his thorough knowledge of the station and everything in it, to Jessica Spell who strives to be the light of someone’s darkest day, to each firefighter I talked to who cared so deeply about their profession, their brotherhood and the community they serve, gave me a whole new perspective on what it means to be a firefighter – a greater appreciation. At the end of the day they can’t rest their head for a job well done because at the end of the day, they are still assisting, rescuing, serving the citizens of Winter Haven. The men and women I met are those I would want there for me in my time of need.

Winter Haven firefighters, we thank you.

Whether it’s a small gathering of friends or a family reunion, birthday, gender reveal, wedd…