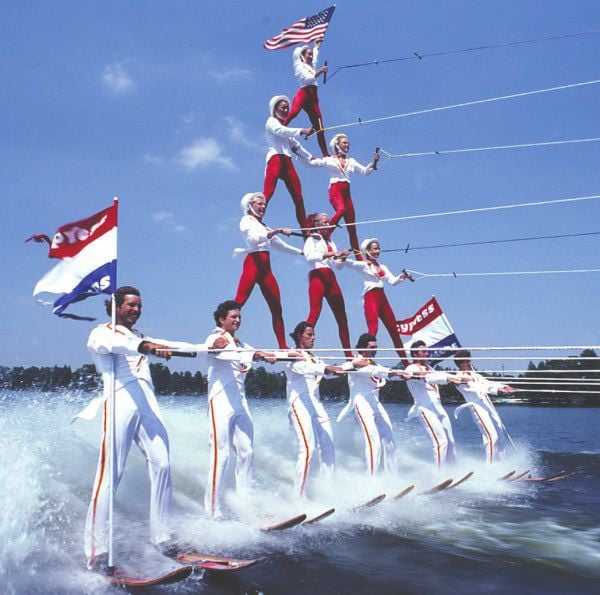 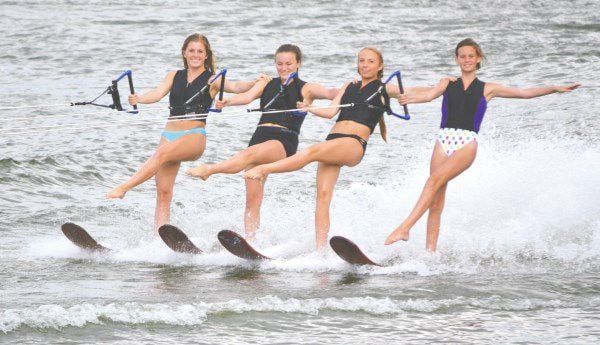 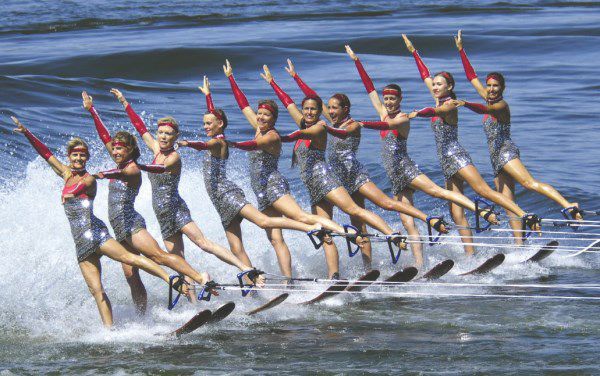 Dick Pope, Sr. and his wife, Julie “bought the 100 Lakes Yacht Club and turned it into Cypress Gardens,” said Lynn Novakofski, skier for Cypress Gardens from 1969-2000 and current photographer for the Cypress Gardens Water Ski Team. The tradition started in 1943, seven years after the opening of Cypress Gardens. While Dick Pope, Sr. was in the military, U.S. soldiers had mistaken the Pope children’s ski practice for a ski show when they visited the Gardens, according to cypressgardenswaterskiteam.com. People showed up while the children, Dick Jr. and Adrienne were in school and asked Julie Pope when the next show was. “Julie told them the next show would be in 30 minutes, then went to pick up the children from school and they started skiing for the people,” said Mark Voisard, President and skier for the Cypress Gardens Water Ski Team.

In 1947, Dick Pope Jr. helped to popularize barefoot skiing. He also began manufacturing his own line of water skis in 1956. Over the years, Cypress Gardens became a place for movies and stars. “Movie stars of the 50’s flocked to the Gardens, especially after Mike Todd filmed the movie, ‘Easy To Love’ over the winter of 1953,” said Novakofski. Other famous 50’s stars that came to visit included Ava Gardner, Burt Reynolds, Esther Williams and Gary Moore to name a few.

It was at Cypress Gardens that over 50 world records in skiing were broken, including ramp helicopter spins, largest ballet line with 26 girls, swivel ballet, the two, three, four and five-tier human pyramids and the first three, four, five, six, seven and eight-man flips, according to the Cypress Gardens Water Ski Team’s Official 2017-2018 Program. Today’s team is keeping the tradition of skiing alive with ski shows, ski competitions and annual adaptive days.

In the 1950’s, the Popes introduced the Southern Belles so “people would know what it was like to be in the south,” said Voisard. The Cypress Gardens Ski Team has acquired a few southern belle dresses and have incorporated them into their ski shows. “People get to see the history of Cypress Gardens reenacted,” said Emily Daniel.

Adaptive Days are done annually for “people with physical and mental disabilities to come out and ski,” said Emily Daniel, a skier of the team since December 2014, “every disabled person is able to experience skiing.” They use a sit-ski to help them with skiing. This year’s Adaptive Ski event took place on May 13th.

With the opening of LEGOLAND in 2011, their ski show was run by contractor, Don Buffa. Buffa is a former skier with Cypress Gardens and a current skier for the Cypress Gardens Ski Team. Many of the team’s skiers ski for LEGOLAND even though the team isn’t affiliated with the company.

The team just celebrated their ski reunion weekend March 4-6, 2016. The event attracted over 300 people. “It’s such an extended family,” said McClintock, “no matter how young or old you are, the friendships keep growing.” People came from all over, even as far as Lebanon and Australia to attend. The team did a tribute show to the first movie ever filmed at Cypress Gardens, “Easy to Love” with Esther Williams. “We brought the southern belles back,” said Yvette Twyford, board member for the Cypress Gardens Ski Team.

Anyone who is familiar with Cypress Gardens knows that the skiers performed so many shows over the years, it deemed Winter Haven as “The Water Skiing Capital of the World.” This team is carrying on a legacy started by a family of dreamers and getting people excited about skiing again. It’s more than a legacy, the skiers are creating an extended family that will last a lifetime.

“I’ve met a lot of people that have changed me for the better,” said Haven Twyford.

Let’s get to the root of it and talk about trees.  I’m going to go out on a limb and say we’…