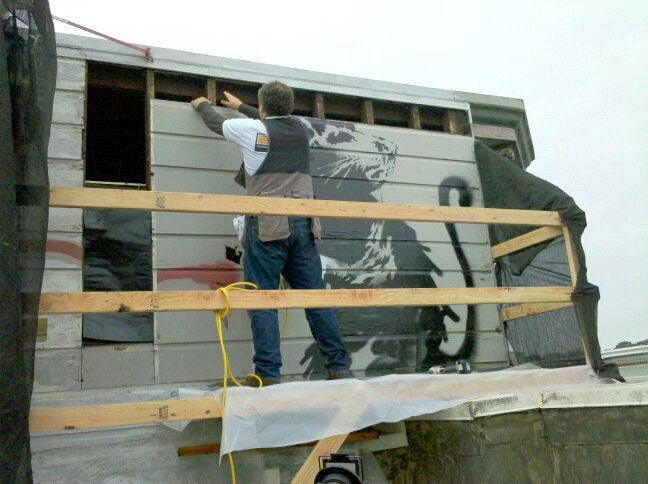 When does vandalism become art?  Street Art and Graffiti Art have a long and controversial past.  They are different from each other, however they share some of the same roots of political unrest.  Artists are willing to risk jail or even death to get their message out.  What began as spray painting on the side of a train or a building has become a global art movement that is making big headlines and art collectors very wealthy.

Graffiti art is more word-based, meaning the artist’s tag name is the art. It’s all about typography and style.  Street art is more image-based, most likely created by a trained artist.  The image will usually have a message relevant to the times that the public can relate to.  It’s almost always located in a high traffic area and will most-likely end up being painted over at the building owner’s expense.

Sometimes street art has been commissioned, in other words, they have permission to paint.  We see murals painted around Central Florida, and they are generally accepted by the residents.  What about when they aren’t given permission? It has become standard practice for famous street artists to have their piece stolen within hours of painting it.  Entire walls are cut down and sold at high-end auction houses for millions of dollars, and the artist will see none of that money. It’s the artist’s intention for the art to be seen by the general public for free.  By the nature of it, it’s supposed to be temporary, too.  So when does vandalism become something more?  At what point does it become art?

According to Brian Greif, an art collector from Nashville and Executive Producer of Saving Banksy, “It is both vandalism and art.  That’s what makes this art so interesting.  Artists in the Street Art and Graffiti genres risk arrest and even death to put their work out their for the public.  I don’t know many art forms where artists have been jailed or killed doing their art.  In LA, a graffiti artist named Psych went to jail for eight years.  There are several artists who have died doing the art.  Skate One, Nexst and Robbo are just a few of the prominent artists who died actually painting in the streets.”

The most famous street artist in the world is Banksy.  And that’s where the Haight Street Rat painted in San Francisco in April, 2010 comes in.

Banksy had spent some time in San Francisco, explained Greif.  “I was heavily involved in the street art scene in San Francisco.  When Banksy came in 2010, I saw the tremendous public reaction to the paintings he did each night.  Banksy was in SF for about 10-days.  He did one painting each night.  Every morning people would scramble to see the new Banksy.  It was disappointing to see the pieces get painted over or tagged within a few days.  I decided to try to save at least one of the paintings so it could be shared with the public.  Banksy is undoubtedly the most famous artist in the Street Art movement.  His most iconic symbol is the Rat.  In my opinion, there is significant historical significance to the Haight Street Rat, and it needed to be preserved.”

Greif believes Street Art and Graffiti are very important art movements, part of a larger, global movement.  “Because these paintings have been done illegally, they are destroyed quickly.  I believe it is important to save key public pieces from this movement.  Not everything can or should be saved, but iconic pieces by the top artists in these genres must be preserved.”

Negotiations with the building’s owner began. Greif wanted to get the painting down and donate it to a museum rather than have it destroyed.  The owners were running out of time and were faced with paying a fine if they didn’t paint over it.  (Until 2014, SF had a “Graffiti Fine” to be paid by the owner of the building if the graffiti wasn’t removed in a timely fashion.)  After many months, they agreed on a deal and Greif started the removal process.

The wall was taken down, board by board and stored in Greif’s house while looking for a permanent home.

Unfortunately, museums weren’t interested in taking it because it was only authenticated on Banksy’s website, not in person. The SF MOMA also felt that some street artists’ intent is to have their art destroyed or not survive for very long.  They wouldn’t want to keep anything against an artist’s wishes.

Why does Banksy keep himself a secret?  Greif was offered $200,000 after he initially took the Haight Street Rat down.  Banksy could be profiting millions of dollars if he wanted.  Greif explains why Banksy stays hidden,  “At first he needed to guard his identity because the police had made him their number one target for prosecution.  Over time, as he became an international sensation, it became about simply not wanting the after effects of ‘celebrity status.’  I have not met Banksy, but friends and contacts who know him say he just wants to paint and do his work on his own terms and doesn’t want the hassles that come with being a celebrity.”

I asked Greif if he knew Banksy’s real name.  “I do not know who he is.  I do know that he is not the guy from Massive Attack.  I do know he is a real individual (not a collective).  Other than that, I have no idea,” he said.  Greif is referring to a rumor that a band member from the Bristol, England band, Massive Attack was the real Banksy.  Paintings supposedly showed up in the same cities wherever the band happened to be  touring.  Banksy is also rumored to be from Bristol.

Greif talks about the future for the Haight Street Rat after it leaves Winter Haven.  “We have not found a permanent home yet.  I haven’t had a serious museum inquiry since Saving Banksy was released.  We will continue to do the traveling exhibit.  It’s been extremely gratifying to show the painting at places like the public library in Kokomo, Indiana.  Over 1,500 people showed up the first night, people of all ages.  In Windsor, Canada, the exhibit venue curated a show of art from ten Windsor area artists.  The artists sold art at the exhibit, and it was a great showcase for them.  I might be wrong, but I feel like the traveling exhibits are doing a lot to help raise awareness and generate positive discussion about Street Art and Graffiti.”

Greif has been offered $1.7 Million for the

No Ball Games - a painting Banksy did for the London Olympics was sold at auction for $1.2 Million.

“The irony of Bansky street art is this; here’s a guy with one and he wants to donate it to a museum, and they don’t want to take it. Yet, someone’s prepared to buy it for a half million dollars.  That’s the beauty of street art.”  -Ben Eine

What do you think?

To learn more about the Haight Street Rat coming to Winter Haven on January 27th, watch Saving Banksy on Netflix or itunes.

Visit www.banksy.co.uk to see more of the artist’s work.

As President of Polk State College, I write to congratulate the Fall 2020 Graduating Class! …

Baking and the holidays go together like peanut butter & jelly.  We reached out to the l…

A place for girls to grow and learn and be themselves, Girls Inc. of Winter Haven is making …