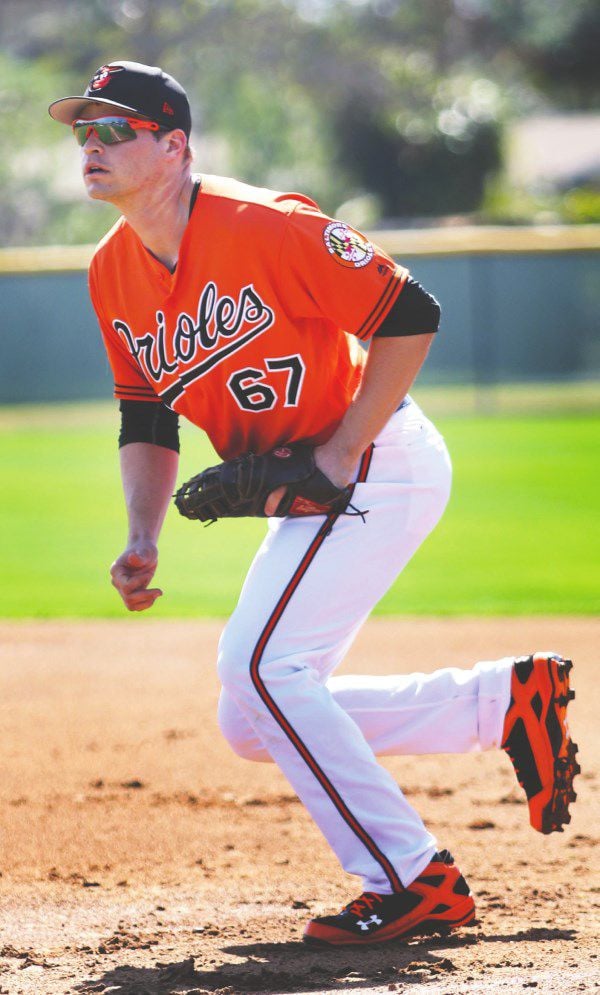 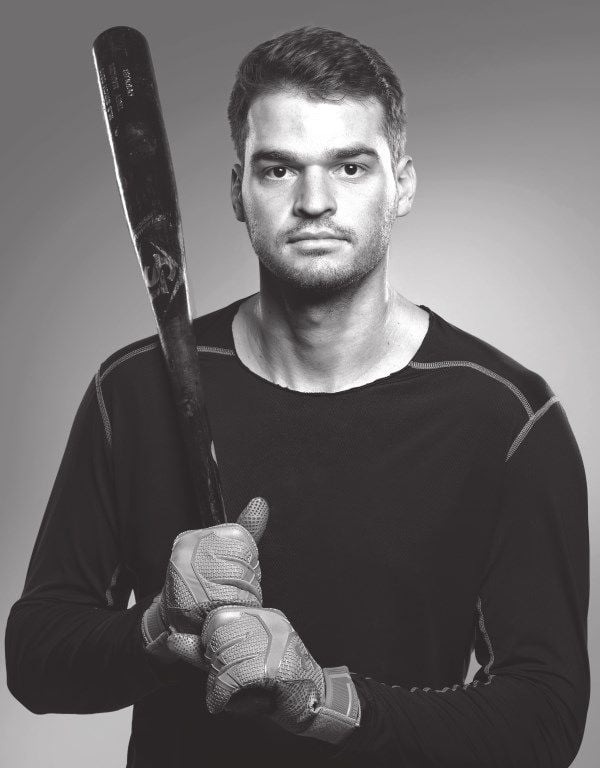 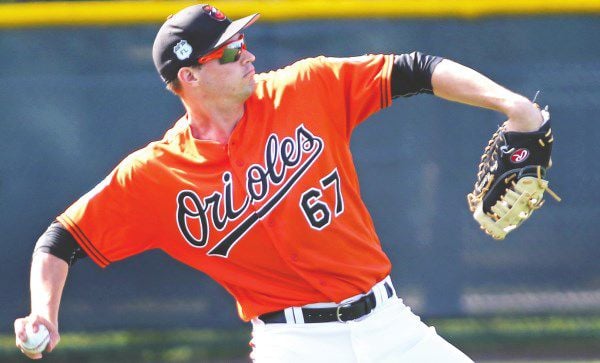 It was September 20, 2016 and the Baltimore Orioles were hosting the Boston Red Sox. The Orioles were nearing the end of their season, with only 11 games left to go. In order to win the second wild card slot, they had to win all 11 games.

That night, the Orioles were losing 2-0.

It was the 5th inning. 0 on bases with 2 outs. The game was being nationally televised.

That’s when they called up, Winter Haven High School graduate, Trey Mancini. He was the Orioles number 5 prospect and this would be the first time hitting in a Major League Game.

The count was one ball and one strike.

Edward Rodriguez pitches, Mancini hits it into the stands! His home run makes the score 2-1.

His mother Beth, a Baltimore native and lifelong Orioles fan, was in the stands at Camden Yards that night. Along with all of his teammates in the dugout and over 20,000 in attendance, the entire stadium erupted! His first time up at bat and he nails it! (unfortunately, the Orioles go on to lose that night 5-2)

Two days later, Mancini hits a double and a three-run home run, accounting for all of the Oriole’s runs in a 5-3 loss to the Red Sox.

Two days after that, he hits a solo home run in an Oriole’s 6-1 victory over the Arizona Diamondbacks.

Mancini goes down in the record books as being the third player ever in Major League Baseball history to homer in each of his first three starts. The others are Trevor Story, who did it earlier in 2016 and Carlos Quentin who went on to play 9 seasons in the MLB.

“If you told me something like that I’d say you were crazy.”

Trey Mancini is a lifelong baseball fan. He remembers seeing his first Orioles game with Cal Ripken as the starting shortstop. “It was a game against the White Sox.” He recalls seeing the game when he was 4 or 5 years old. With his debut in the Majors being so memorable, those who have seen him play and grow up believe he could be as appreciated as Ripken is in Baltimore.

Blake Doyle, brother of former Major Leaguers Denny and Brian, is coowner of Doyle Baseball Camp. Doyle is a leader in teaching baseball development, innovation and fundamentals for over 35 years. Mancini has been working with Blake since he was just 12-years old.

“As a major league hitting coach, I always compare hitters to guys I’ve worked with in the past.” Blake continues, “Even when he was in college he reminded me of Dale Murphy with his swing.” Not a bad comparison as the former Atlanta Braves star from the 80’s hit 398 home runs in 18 years and won the National League MVP award in 1982 & 1983.

Trey Mancini, first baseman of the Baltimore Orioles warms-up, during the second day of spring training at the Ed Smith Stadium in Sarasota, Florida.

Coaches believe Trey Mancini, a 6”4’ 24-year old has enough discipline at the plate and power in his stroke to make it far in the MLB. “He has the potential to be the best hitter by far (that has gone to Doyle’s camp).” says Blake. “He has not only raw power, but he has the ability to hit all fields. He’s a tough hitter to pitch to because he has such ability. At a young age, in high school and at Notre Dame, he has the quality look of a professional. You can see how long his bat stays in the hitting zone. He was showing that at an early age in high school and now that he’s a professional, you can see he’s worked on that. I think he could play a long time.”

That’s the hope of Orioles Manager, Buck Showalter. He invited Mancini to Spring Training in Sarasota; this despite the fact that the MLB Network says that Baltimore has one of the best offenses in the game, and that’s without Mancini in the starting lineup. Showalter believes, the more offense the better.

“So many times players come through a system and don’t master it before they are promoted to the next level.” Showalter said. “(Trey’s) done well at everything we’ve thrown at him. He’s the type of guy who will be as good as he’s capable of being and that’s all I ask.” Showalter adds, “He has a lot of the challenges that young players face on and off the field but he has a grip on reality.” In the short time Mancini has been in the Major Leagues, Showalter has been impressed.

“The biggest jump in all of sports is probably from the Minors to Majors in baseball.” Showalter said. “It’s a major, huge chasm and whether or not hitters will hit it and understand the strike zone. Trey is fine and he has discipline.”

Showalter said spring training is not everything he will use to judge who should make the Orioles roster, but Mancini’s personal makeup could help him despite the challenges he faces, which are more than any young player usually faces.

Those challenges include the Orioles having just signed slugger Mark Trumbo to a three- year, $37 million contract after he led the league with 45 home runs last year and that Chris Davis (Mancini’s position) will come back from his injury . “I put all that aside and I seek out anything I can do to help (the team).” Mancini said. “I know what I can do. I’ve been playing baseball since I was 4-years old. I reached a goal in September but I have to stay up here.” In his two weeks on the Major League level, Mancini mostly played designated hitter and in five games he hit .357, scored three runs, drove in five of his five hits. In his three years in the Minor League, he hit .306 in parts of those years and had 54 home runs in 483 games.

Mancini talked about his hitting at the end of last year, “The minor league season ended on September 5th and I didn’t play again for a few weeks. I struggled in August and it taught me a lot and I figured it out and the last five games of the year I finished good.” He said the difference between seeing pitches in the minors as opposed to the majors is that the pitchers in the major leagues know the hitters better. His job at the plate is to know how to adjust. “When facing these guys I had to have a plan. I wasn’t guessing. I always look for a fastball and just adjust. You have to anticipate but (major league pitchers) rarely make a mistake.” There is a very good chance Mancini will make the league, but it’s been a long road.

“More than anything, it’s a story of perseverance.” His Mom, Beth said. “Just all the ups and downs that go with baseball. Baseball is a game of failure. If you hit .300 that’s a good batting average but how to handle the other 70 percent? There are not many places in life where the failure rate is so great. What you do with the failure is the story.” Mancini has been blessed with many friends and family to rely on. “People have really supported him, they like the person Trey is.” She said, pointing out how driven he is. “After he finished playing in low A ball, he’d hightail from Baltimore to Notre Dame and he was earning his degree while playing in the minors.” She said, earning a degree in political science.

During his time in AA, he thought about calling it quits. “One low time came in March and he was going to AA,” Beth said. “We thought it might be his time.” Mancini didn’t give up. He started taking batting lessons from former Orioles center fielder, Brady Anderson who is known for hitting 50 home runs in the 1996 season. “Trey went to his house in Los Angeles and Brady came back with reports that he was a pure hitter,” Beth said. And what were her thoughts as she watched her son hit a home run in Camden Yards? “It wasn’t what I expected. I really saw his excitement and the 19 years of waiting and the ups and downs, twists and turns. It was surreal. It really hasn’t hit me what he did in September...it’s never sunk in.” Mancini knows how fortunate he is and wants to relay it to others and help whoever he can. On February 3rd, Mancini talked to the students at the Donald E. Woods Opportunity Center, a second chance school for students who have had problems in a regular middle or high school. “You’ve got to talk to those kids and see if you can help them with their lives,” Beth said. “Again, this is a story of perseverance...for those kids as well.” Mancini also coaches young players at the Doyle Baseball camp when he returns home to Polk County. “He signed and he comes back to be an instructor,” Doyle said. “He’s always giving back.” Mancini is the whole package. “In high school I knew he had the chance to play.

He probably could’ve been drafted out of high school but he decided Notre Dame was the place to go.” said his high school coach, David Saliba, who now coaches at Santa Fe. “He deserves everything he’s got because he’s worked so hard. He’s grateful, he’s special. I hate cliches, but he’s a special young man, a true professional and at such a young age. He’s a Major League player now.”