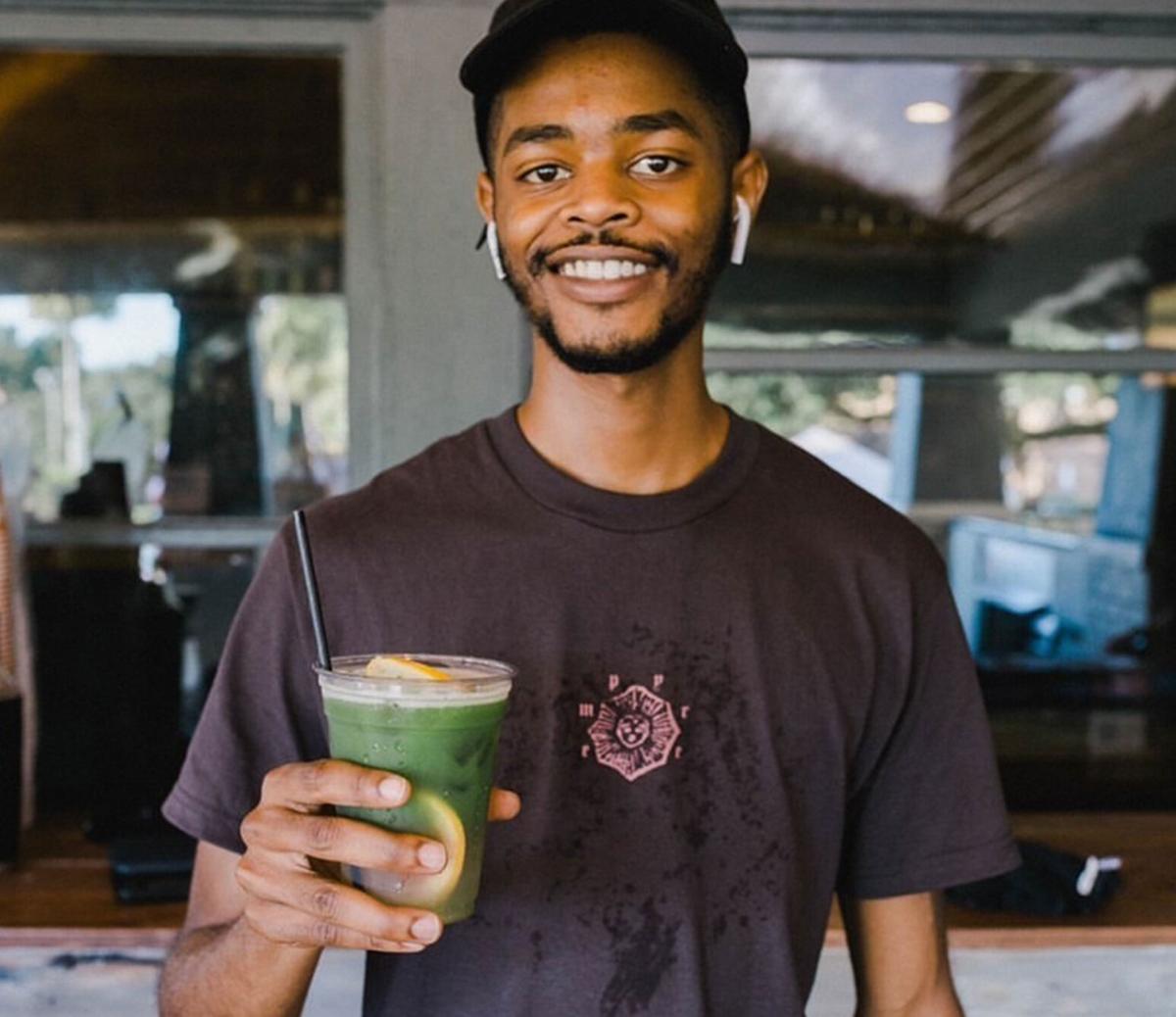 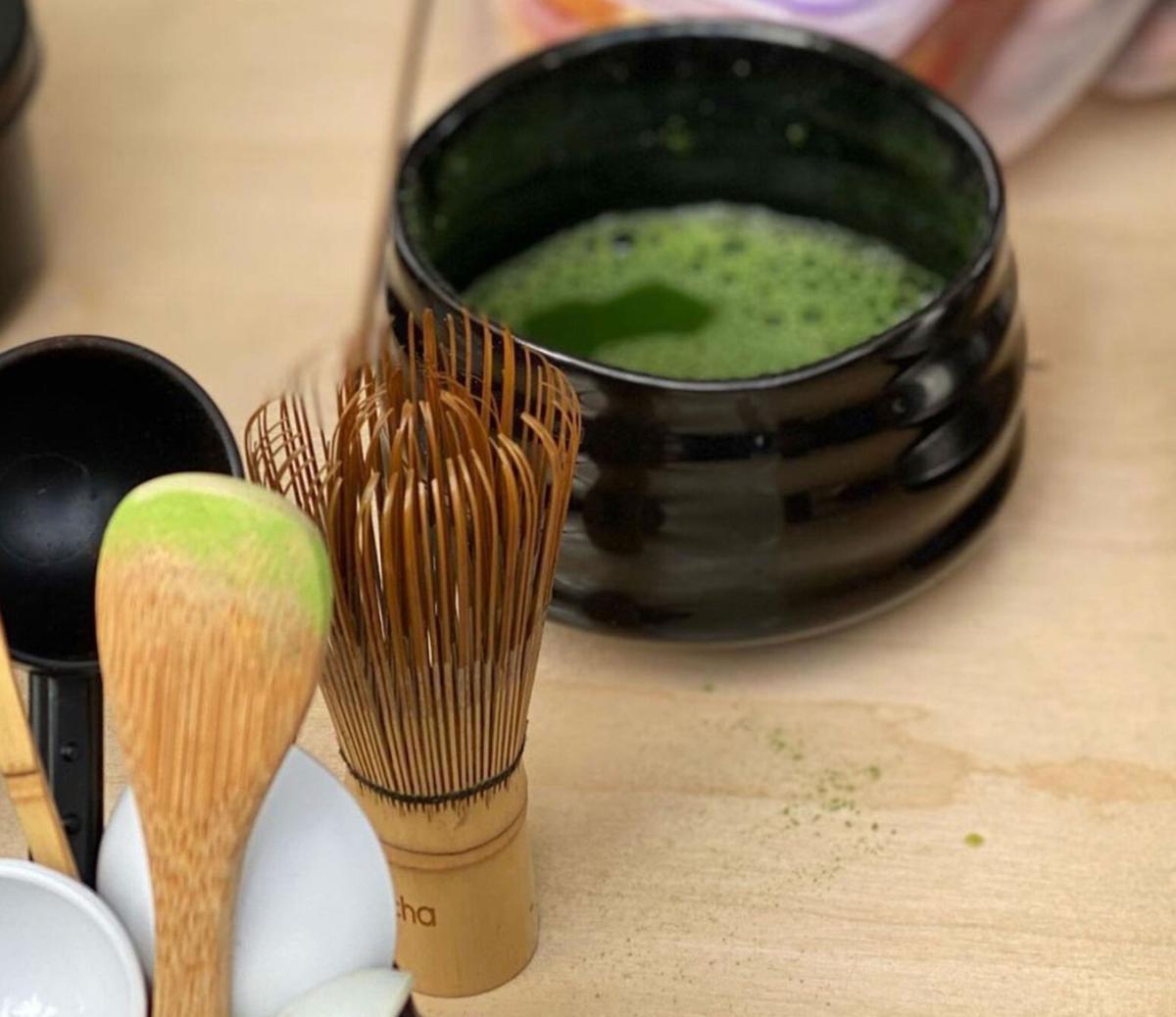 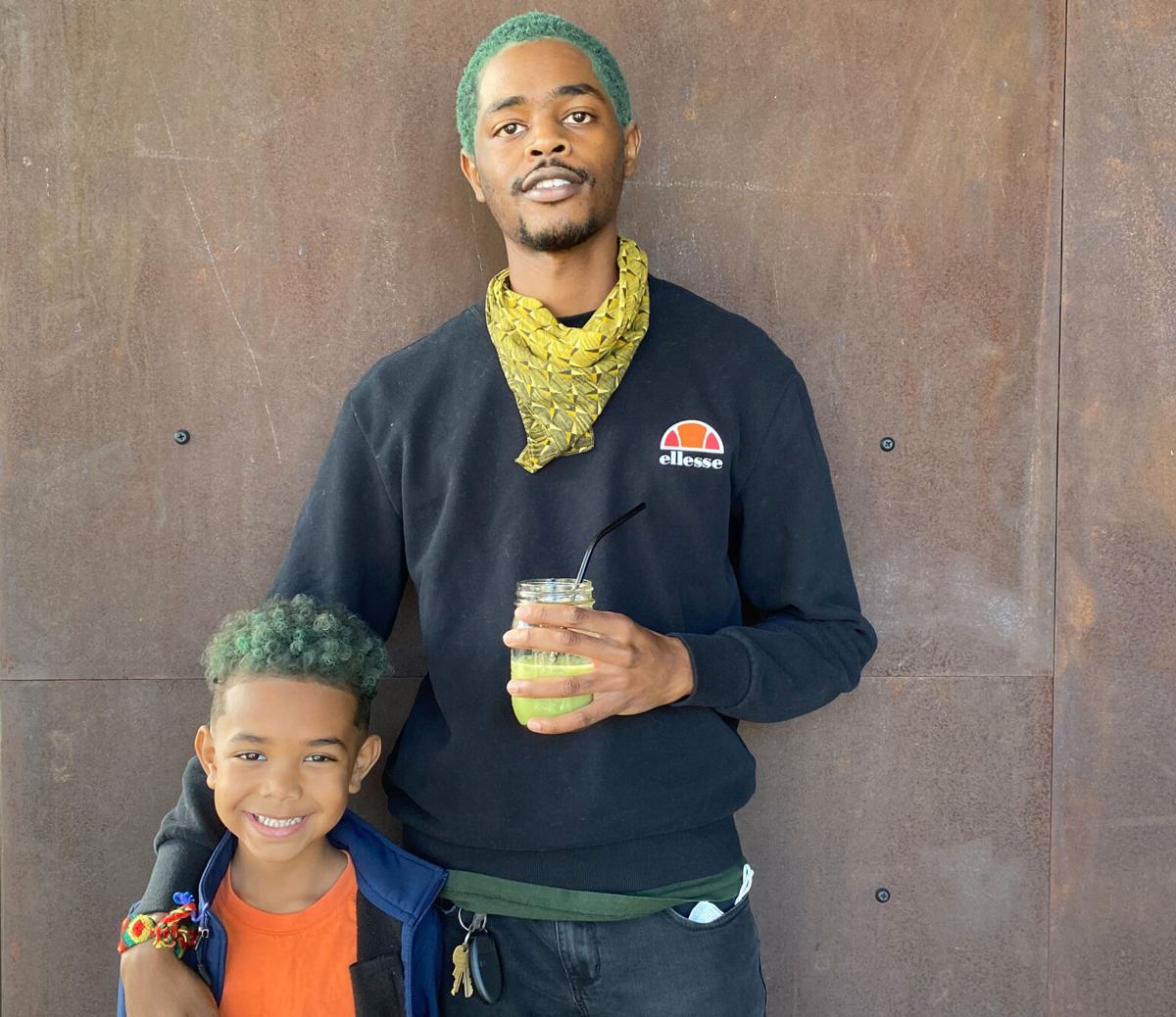 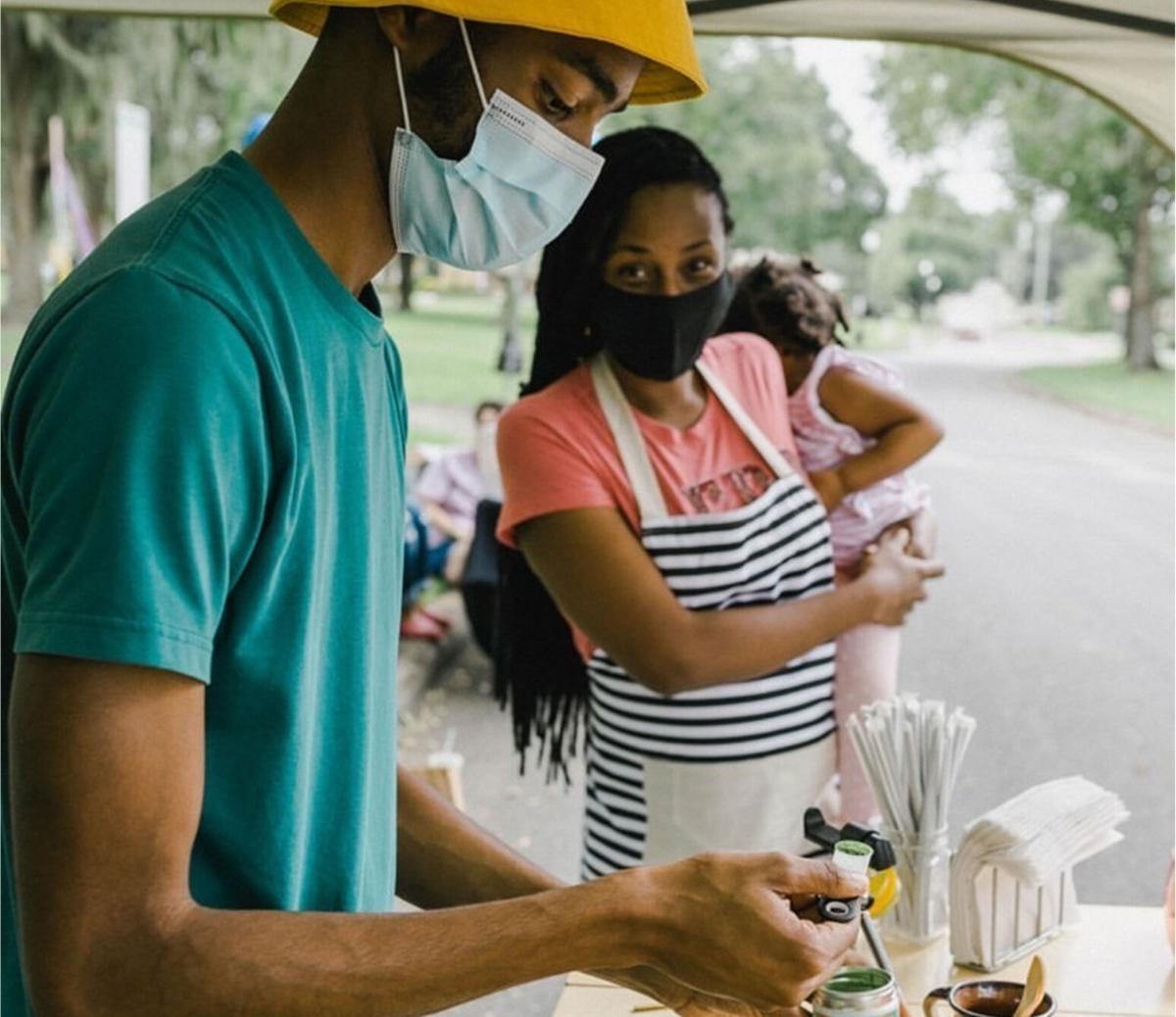 Twenty-nine-year-old An’Drew Kamani Williams, aka Drew Willz, has created an ever-evolving brand centered around graphic art, clothing, coffee, matcha, and more. 16.92 Coffee Matcha Bar is in the business of bringing coffee and matcha drinks to Central Florida through the modernity and magic of social media and local collaboration.

The brand took its first breath in 2012 in Williams’ design class. Asked to create a mock brand for an assignment, he thought up 16.92, an homage to his birthday, January 6, 1992. Williams graduated from Keiser University with a degree in graphic design. Along with his music, Drew began doing freelance work around the city, steadily building a collaborating network of vendors and artists. His freelance work entailed album covers, single art, and eventually corporate work – making logos, designing color schemes, and uniforms for businesses. “I feel like I had a brand,” said Williams of the company’s beginnings.

Popping up on the coffee scene

The mother of William’s son, Winston, is Colombian. Her grandparents own a coffee farm in Colombia and would bring coffee to the States. Williams described it more as a decoration, still in its husk. “I got a popcorn popper and started learning how to roast,” he said. “I would bring it around to local shops to see what people thought. I would ask every owner their opinions of it so that I could get better and better. I finally got it where I wanted it to be, and I started selling it.”

Working as the Supervisor and Drink Consultant for Sabu Ramen at The Joinery, Williams would bring his AeroPress and pour-overs to make drinks for the staff. He said working with Kristy Scott in the past at 5th & Hall “sparked the idea.” Scott, the Director of Brand Experience at The Joinery, suggested Williams set up 16.92 at the Lakeland food hall.

His first thought was to roast and sell his own coffee beans, but he thought it would be a good idea to make the drinks too. In early 2020, he started a coffee bar. “Making coffee beans is really hard. Roasting on a popcorn popper, trying to sell to a mass of people is very difficult,” said Williams. “So, I started working with Ethos Roasters, and now they sponsor me, and we created our own roast together.” Their collaborative roast, Roasted Caramel, is the blend he uses at the 16.92 Coffee Matcha Bar.

Matcha naturally fits into the equation as an alternative for customers who don’t drink coffee. He first tasted the beverage in New York in 2019 while working as a latte artist at an upscale barbershop in Manhattan.

Williams was captivated by a shop across the street, Cha Cha Matcha. It’s peppy pink and green facade invited Drew inside to what all this Fuschia fuss was about. The shop was beautiful and current, playing modern music with a steady flow of customers filtering in to get their much-needed matcha pick-me-up. He didn’t know what matcha was, had never tried it up to that point, and wasn’t exactly a convert when he did. “I had it – it tasted horrible. It was disgusting,” he said. “It was the worst drink I’d ever had. […] It wasn’t until I came back to Florida and started playing with the recipes that I started trying to figure out how I could make it taste better.”

He utilized YouTube and other vendors to become a matcha master at his bar. “The techniques that I learned are from social media, through different baristas,” said Williams. He does a podcast on Instagram called “Brewz at Drewz,” where he makes drinks and interviews fellow baristas and artists from around the world.

The 16.92 Coffee Matcha Bar offers refreshers, including macchiatos, classic pour-overs (using his Ethos blend), and matcha drinks. Their drinks are made with alkaline water and organic ingredients, and non-dairy options are available.

In collaboration with another local business, La Sirena’s, Williams uses their homemade Fresca to combine with his matcha for a refreshing blend of complimenting flavors. Community collaboration has proved a valuable part of Williams’ business model. “I’m used to that because of music,” he said. “Everything feels like a big DJ Khaled record. It’s like a bunch of features – that’s how I work.”

“I think I’m more of a producer, in a sense. I like to get the best things from everyone and put it together. That’s why I feel like being a bar is the best way for us to showcase different vendors through our taste palette.” The 16.92 Coffee and Matcha Bar premiered at the Buena Market. Williams said he worked with the market’s founder, Stephanie Gregg, to bring his coffee creations to a market setting. “She helped me launch 16.92 in a market,” he said. “While she was handling everything for the market, she assisted me as well with 16.92 in the beginning, and we just started growing with each other and growing with the different vendors,” he said of the Buena Market.

Perhaps his most important collaboration is with his team of supporters, including his mom, girlfriend Philli, and son Winston. Williams spoke of his appreciation for the support and influence of his mother. She was an event planner in New York when he was younger, allowing him to meet artists, performers, and personalities like Missy Elliott, P Diddy, and Mike Tyson. “That let me know that that’s obtainable,” he said.

For now, Williams is going with the flow. But you can expect matcha more from 16.92 in the coming months and years. He eventually wants to open a brick and mortar location, with more to follow. Williams’ background is Jamaican, he hails from New York and has attended school in London, saying, “I want to be able to go to all those places and have my work there.” The coffee creative envisions a future in which 16.92 is a cold brew delivery service, accepting modern payment forms like bitcoin. “I want this to be like Apple,” he said.

Williams is happy for Polk County to be the backdrop for his brand-building endeavors. His grandmother first moved to Lakeland when he was in elementary school. He and his mom moved down from New York when Williams was a young teen. “This is an amazing place to live and start a business,” he said. “It’s a small town with a lot of people who love the people who come from here.”

“I think of Publix, and I look up to that. I see where they started, and I like how they treat their customers. […] To know that that came from here, is like, it’s so possible.”

Williams’ advice for others aspiring to create a project, business, or brand of their own? “Whatever is crazy that comes to your mind, just do it.”

Get to know Drew and his up-and-coming coffee bar on social media and the many pop-ups and markets he attends, including the Buena Market and Winter Haven Farmers Market.

The Future of Food or A Fad? French Fashion-Food coming to Polk