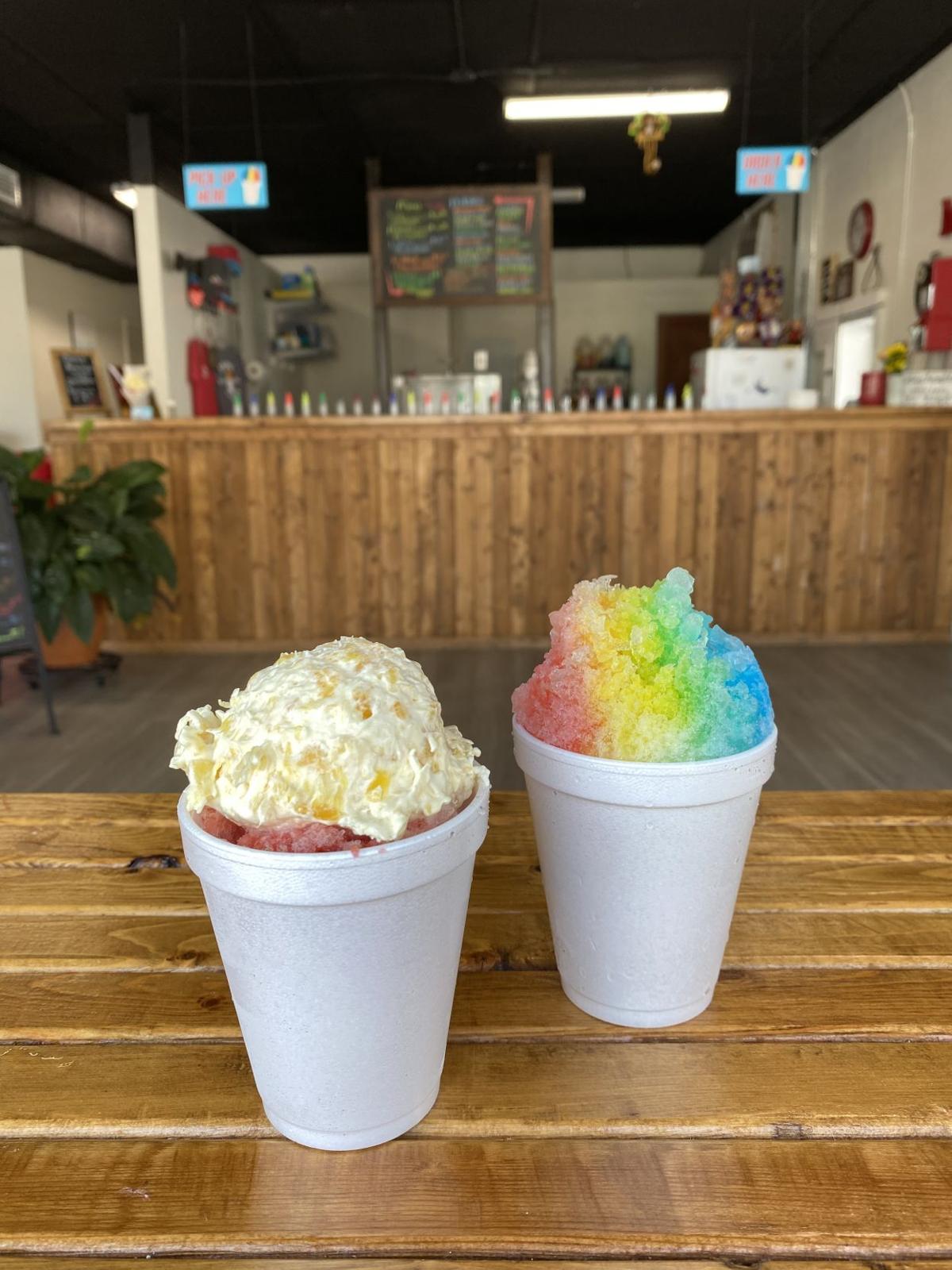 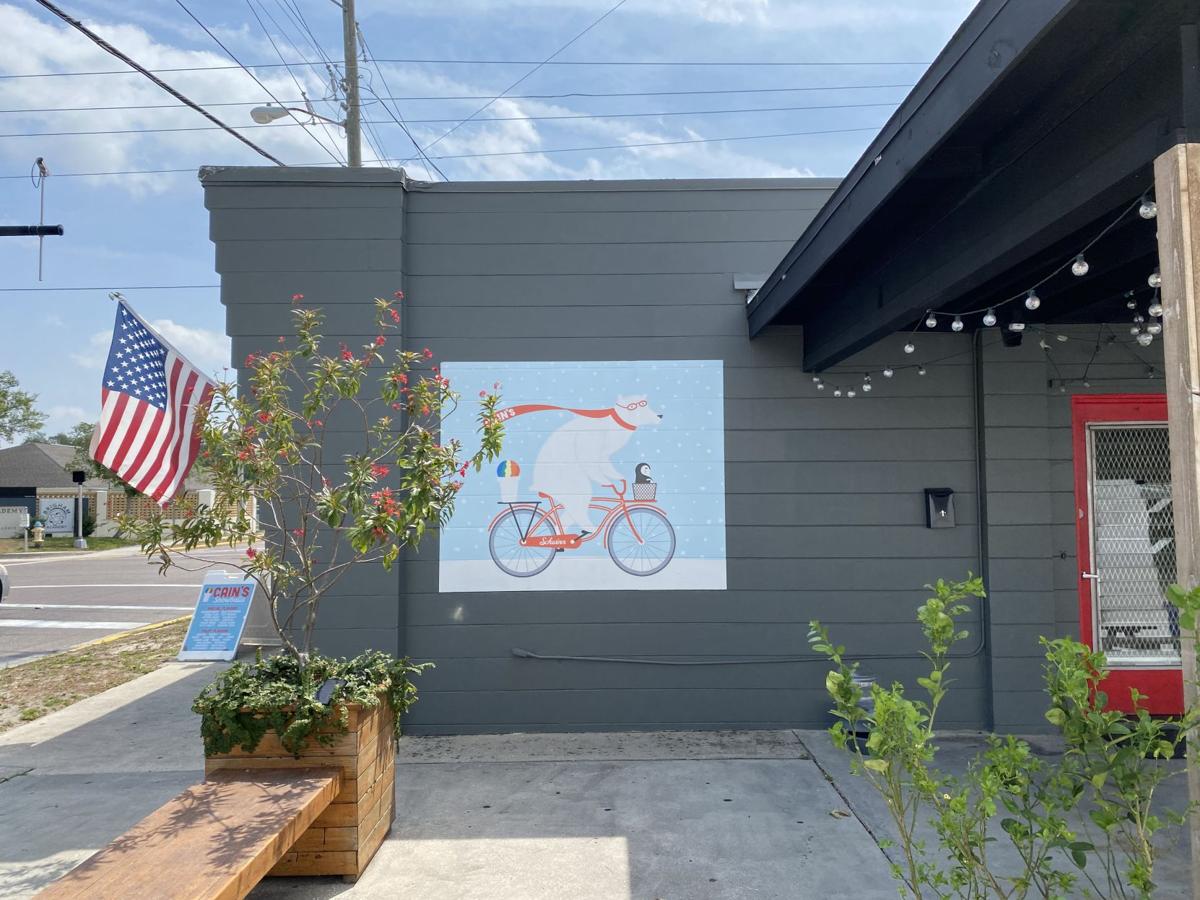 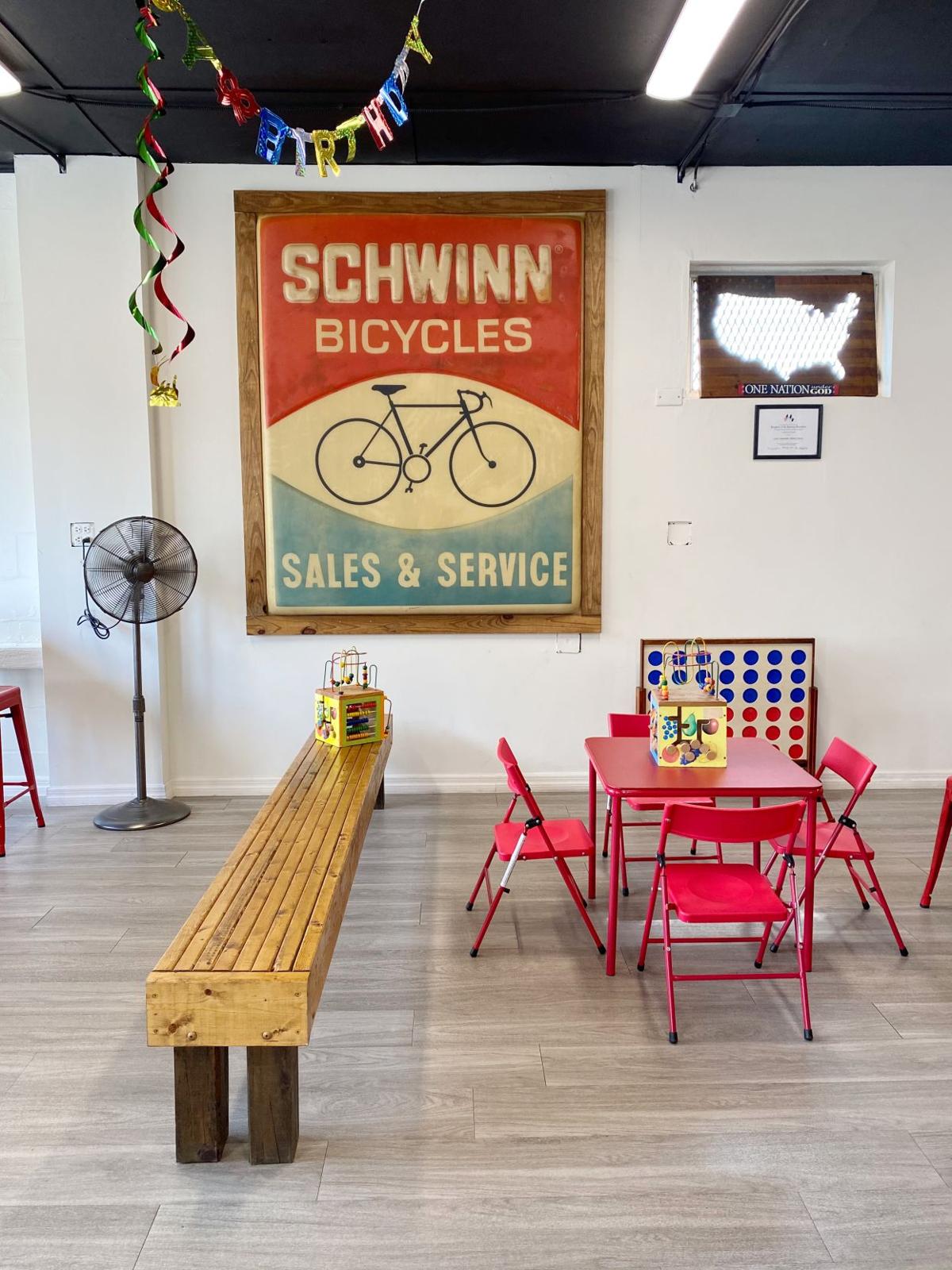 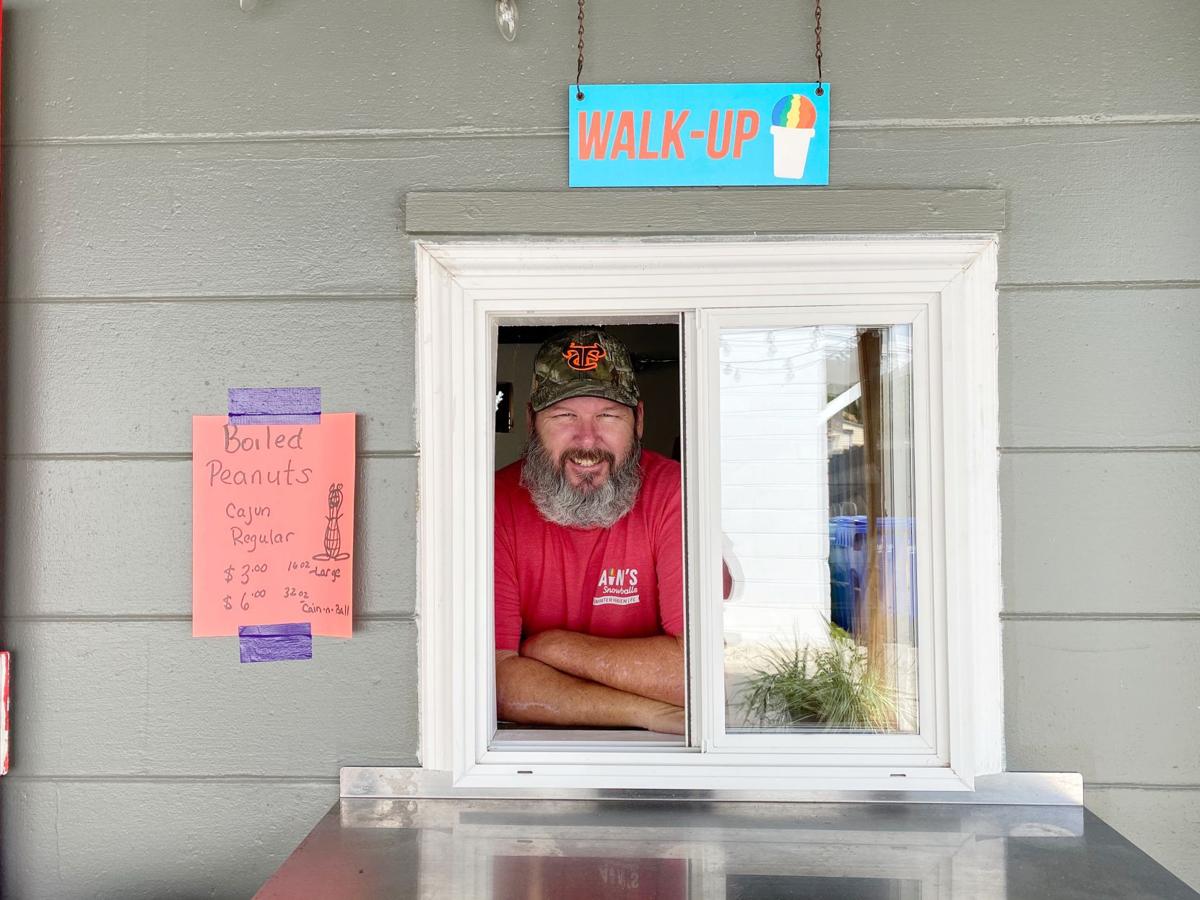 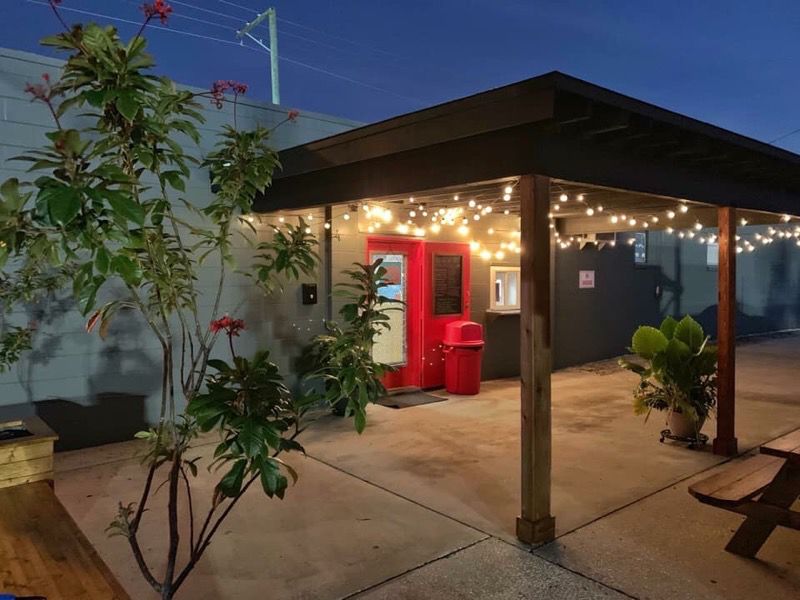 A snowball with a side of nostalgia, please! Cain’s Snowballs, a Sixth Street shaved ice spot, turned a year old at the beginning of this year. The eatery – or should I say treatery – was opened on January 5, 2019, by husband and wife, Ron and Dean Cain. The Cains, both born and raised in the Sunshine State, grew up in Orlando. Dean moved to the area in 2012, met her husband, and moved him to Lake Alfred with her and their two older pups, Jake and Jessie. “We love the area. It is such a great community,” said Dean.

Dean still has a day job in Orlando as a House Manager, and Ron was a truck driver until they started building the budding snowball business. The snowball concept seemed a natural fit for the area which had none at the time. “If you go to New Orleans, there’s 200 of these [shaved ice] shops – one on every corner it seems. You can find them in North Carolina and Georgia, Tennessee – but in Florida, there is only a handful,” said Ron.

The Cains opted to create their own brand rather than franchising with an existing company. Though they are in the business of confections, Ron said, “We didn’t want a cookie-cutter type of atmosphere.” From special menu items to the display of the building’s history, or the tables, high tops, benches, and counter they built – everything is unique, everything is a reflection of the Cains’ vision for a rustic, sweet neighborhood snowball stop.

When they found the 6th Street locale for Cain’s Snowballs, they fell in love. It was a neat building in a good location, and the building’s history turned out to be the cherry on top. Al and Ruth Andersen opened Andersen Cycle & Key Shop across from City Hall in the 1940s, according to Dean. “They built this building and relocated in the 50s,” she said. The official opening date of the new building was February 1, 1956. It persisted for three generations, leaving pieces of its history in the form of old photographs, signs, and stories from past bike shop patrons for the Cains to uncover.

“We have so many people come in and tell us they bought their first bike from the Andersens. They like to come in and reminisce,” said Dean. Like the Andersen’s bike store, the Cains hope to see their Winter Haven snowball shop go on for three generations with Ron’s son Kyle, and any future grandchildren he has, according to Dean.

Dean remembers spotting the old Schwinn sign on the side of the building. “We knew immediately that we wanted to take that sign down and incorporate it inside the building,” she said. As they cleaned and renovated the building, Ron and Dean would find more odds and ends of its history. The front door at Cain’s is original to the building – it too had a story to tell. According to Dean, Mr. Andersen drilled a hole in the corner of the door to run an air hose outside for children to air up their bike tires. “We didn’t even know that that’s what it was for,” said Dean who had an affinity for the old door. “Now to know the history of it – it’s even better.” Other interesting finds from the building’s past include a handwritten note on the wall stating that any bike left over 30 days would be charged 25 cents per week storage, along with old advertisements of a boy with a broken bike and a thought bubble reading, “I think I’ll let Al Andersen – The Bike Man fix it.”

The Andersens’ daughter Marilyn brought in photos of the bike shop to share with the Cains. They plan to hang copies of the photos on the walls alongside the now framed ‘Schwinn Bicycle Sales & Service’ sign. Dean remarked, “We kept the bike theme going by hanging an antique 1950s Sky King bike as display and a little retro Schwinn tricycle.”

“We enjoy telling people about the history of the shop,” said Ron.

Cain’s Snowballs’ mission is to “serve you the best snowball you will ever taste.” To ensure sensational snowballs, the owners researched various machines on the market. They landed on a Southern Snow Machine, originally designed in 1932 in New Orleans. The machine’s design has changed little since its creation. “It makes the fluffiest, powdery snow that you can get,” said Ron. The Cains use a double filtered water system to make their own blocks of ice for the snow. They make their own syrups, too.

Nothing can ignite unfettered childlike joy quite as much as a rainbow-stained tongue and a brain freeze on a muggy Florida afternoon. Along with the signature rainbow snowball in their logo, guests can choose from a range of fruity and special flavors from banana, cherry, grape, and raspberry, to bubble gum, cotton candy, egg custard and Sugar “Cain.”

If you knock on the counter twice and spin around while patting your head and rubbing your belly, they’ll even let you in on their secret menu items (just kidding, they’ll tell you sans knocking and spinning). The Squished Frog, consisting of kiwi, strawberry, sweetened condensed milk, and gummy frogs, is a hit with patrons, along with the Lucky Monkey, made with banana, marshmallow, and chocolate syrup.

“We also make our own toppings,” said Ron. A guest favorite to top off their snowball is Cane’s pineapple fluff – an airy mixture of pudding, cool whip, and crushed pineapple.

If that doesn’t ‘float’ your boat, Cain’s serves up root beer floats with A&W Root Beer and a scoop of French Vanilla ice cream. A root beer float might just be the best thing to wash down their homemade cookie ice cream sandwiches. If you want a little salty with your sweets, Cain’s makes one of the South’s favorite snacks – boiled peanuts. Dean joked, “We stop short of growing the peanuts to boil!”

This year, Cain’s started slinging snowballs (not literally, of course) at the Winter Haven Farmers Market. Their mobile cart is also available to cool down weddings, swim meets, birthday parties, and other events.

Beyond vintage bike signs, bubble gum snowballs, and pineapple fluff, the Cains say they most enjoy the opportunity to meet people and be a part of the community. “It’s turned into a neighborhood gathering center,” said Ron. “We have families walk their kids down in their little wagons or ride their bikes down or just take a walk from the neighborhood. […] We’ve made a lot of friendships.”

Take out from the walk-up window for now, and when the world opens up again, stop in Cain’s for cool delights served by delightfully cool people!