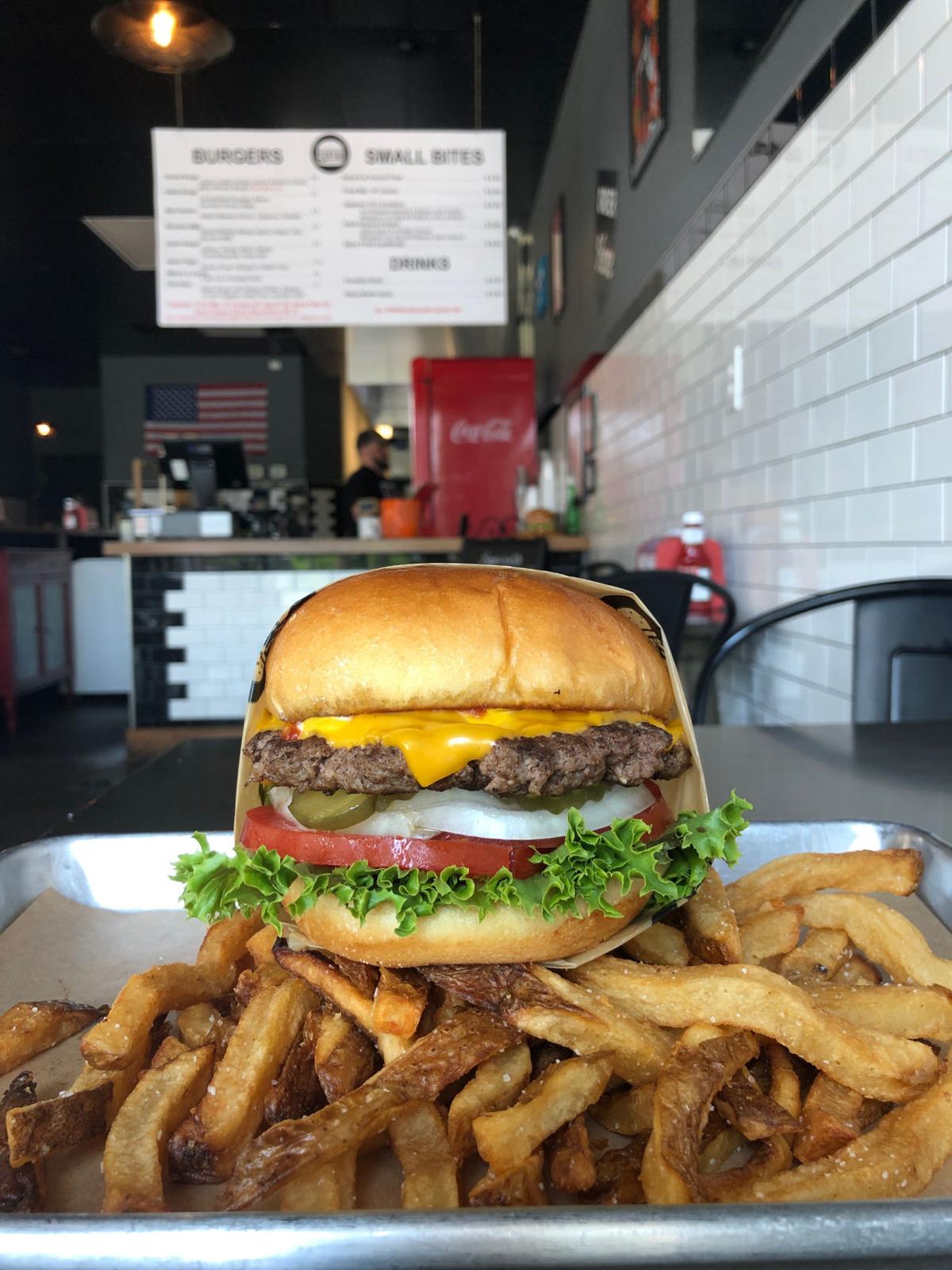 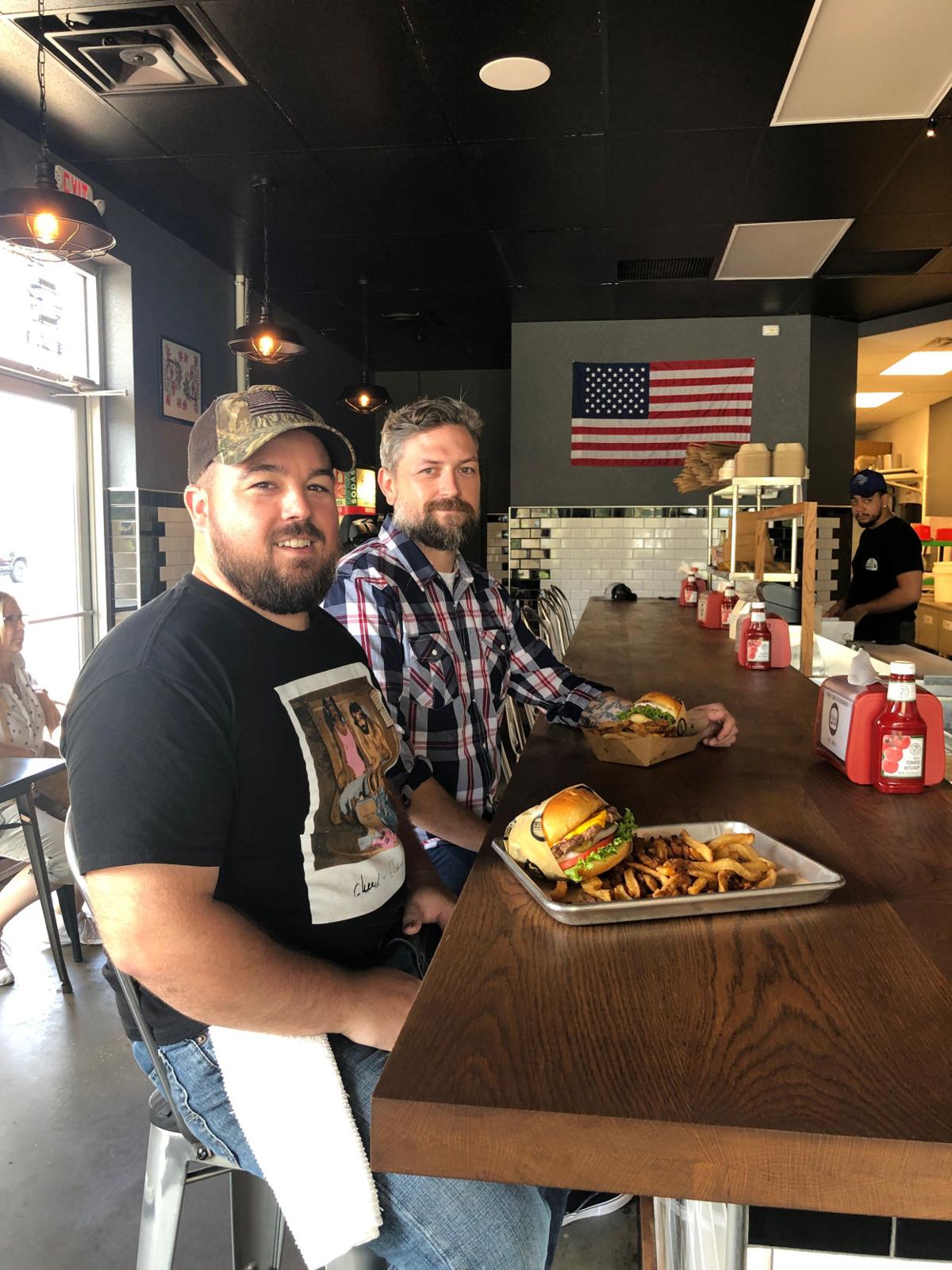 Like many good ideas, the concept for the Adler’s Burgers food truck started over “an open flame and open beverages” at a backyard barbeque. Husband and wife Wade and Jacki Walston and friend Jeremiah Waters teamed up to perfect the American classic. “We were literally having a backyard barbeque talking about how we wanted to do a food truck. We threw it out into the universe, talked about it and it happened,” said Wade. The food truck’s namesake came almost as easily as the idea to start it – Wade and Jacki have a son, Sheriff Adler Walston. The Adler’s name and dino nuggets on the menu were for him.  Jeremiah Waters, who hails from Upstate New York, became their first employee and within a week, their first business partner.

The trio started the truck 3 years ago and took any gig they could get. Wade  said, “If you had a house party with six people we would be there in the off chance that one of those six people were in charge of the swap meet at their church or the company picnic.” Waters and the Walston’s hustled with the food truck for about eight months when they were presented with the opportunity to open a brick and mortar. In fact, it all started in the alley next to their Davenport burger joint.

They became the smash burger fix for the late-night crowd of the adjacent Paddy Wagon Irish Pub which Wade, Jacki, and Jeremiah  worked at for a time. To be respectful to the other local businesses, Adler’s wouldn’t set up their truck until after 10 pm. Their success didn’t go unnoticed by other eateries in the plaza and the owners were ordered to cease and desist. The owners of the pub saw the advantage of having Adler’s available to their customers and threw out an offer for the space across the alley.  “If it wasn’t for us getting kicked out, we probably wouldn’t be sitting at this table currently,” said Wade. Well if it weren’t for that, and their stellar food and customer service of course.

Ask Wade Walston, a California native where to find the best burger on the west coast and without skipping a beat he’ll tell you In-N-Out Burger. The trio’s goal for Adler’s was to be the same kind of indisputable burger rep in Florida. “We weren’t trying to reinvent the wheel, we were just looking for a missing spoke. Currently, there’s not any one place in Florida known for having the best burger,” he said. “Florida has a lot of fantastic burger franchises and local mom and pops, but no definitive good one. We’re trying to fill that void.”

It all starts with the bun. The three owners spent plenty of time, in the beginning, trying different buns out to find their perfect vessel for their burgers. They found an artisan bakery out of Coconut Creek, Florida called Cusano’s Bakery. Cusano’s has been family owned and operated since 1966 with over 100 years of bread baking tradition passed down through the generations. Wade described their bread as “wildly old school, a fantastic product.” Sitting inside this magnificent bun is their uncomplicated all beef, no B.S. smash burger. The burger is comprised of nothing but quality, Midwest, high-fat content ground beef. “There’s no filler in it, there’s no craziness, there’s no Ribeye steak in there,” said Wade. “We like our steaks an inch and a half thick, and we like our burgers with a lot of fat and smashed.”

The fast-casual eatery offers $12 combos including a burger, hand-cut fries, and a craft soda. “I think part of our success is that we don’t have an overcomplicated menu,” said Waters.

“Hamburgers are an American classic,” said Wade. “We do our best to not overcomplicate it.” Their opus (and number one bestseller by far) is a reflection of that mantra. The Adler’s Classic Burger is dressed with lettuce, tomatoes, pickles, onion, mustard, mayonnaise, ketchup and a slice of American cheese.

Though the partners all contributed to their minimal, flavor-packed menu, Jacki Walston – who studied culinary arts at Le Cordon Bleu – is the creative genius behind their weekly specials. The pun-laden, campy names are reason enough to make you want to skip your usual and try something new.  “I think the beauty of a burger is you can put just about anything on it and it’s always great. Think little black dress of the food world,” said Jacki. “I love getting people out of their comfort zone with flavors, and the burger is a great vessel to do so with. For example, we did a burger called the LamBURGhini, it had baba ganoush on it. So many people had never tried baba ganoush before and discovered how much they actually love it. I’ve found the quirkier the name, the more willing people are to try out of the box burger toppings.”

Regulars flock in for treats like the Ernest Hamingway that Jacki created with in-house made spicy mustard, mushrooms, swiss cheese, and thinly sliced ham. I’ll give you a moment to brace yourself for a description of the Jalapeno Business. Ready? Jacki makes a jalapeno, cilantro, lime ranch and adds with it a jalapeno firecracker (a fire-roasted jalapeno stuffed with pepper jack cheese, rolled in an egg roll and deep-fried), a smash burger with pineapple chutney, cheddar cheese, onion, tomato, lettuce, and fresh jalapeno.

Coming to an Alley Near You

The food truck and restaurant have been so well received that Adler’s will be opening a new location in downtown Winter Haven. Your new go-to burger spot will be tucked between Jessie’s and Jenson’s under the covered walkway. Adler’s Alley, as it will be called, will have a walk-up window for patrons to order and take away or sit in the bars’ patio seating during the day. After Jessie’s and Jenson’s open in the evening, you can enjoy your dreamy burger at either a smoking or non-smoking bar. If you’re in the downtown area, you can enjoy your burger without leaving the office or Grove Roots or Union Tap Room, as they’ll be offering a delivery service to a section of downtown Winter Haven. Adler’s Alley is slated to open later this month.

Humbly, the owners said they couldn’t have done it without the stellar performance and service of their employees. “If it weren’t for our employees, we would have sunk a year and a half ago,” said Wade. “Our employees are above and beyond.” With a dream team of people, killer food, and service, Adler’s is poised for expansion. One day, they would like to have six brick and mortar locations and beyond that – the sky’s the limit. One spot they have an eye on is Orlando International Airport. Wade Walston envisions their tasty burgers complemented by a full bar at the airport. “I believe with our product and our customer service – if we could bring this to Orlando International, we’d be a good addition,” he said.

Jacki Walston beautifully summed up the best part about growing the burger brand. “It’s easy, I love feeding people, it’s such a rewarding thing to see families enjoying food together,” she said. “It’s brought us closer to our community and I look forward to becoming part of more communities in the future!”

The ongoing coronavirus pandemic has affected the health of many directly. For others, inter…

With Omar Gonzalez’s culinary chops and his wife Caylee’s front of the house, hospitality, a…