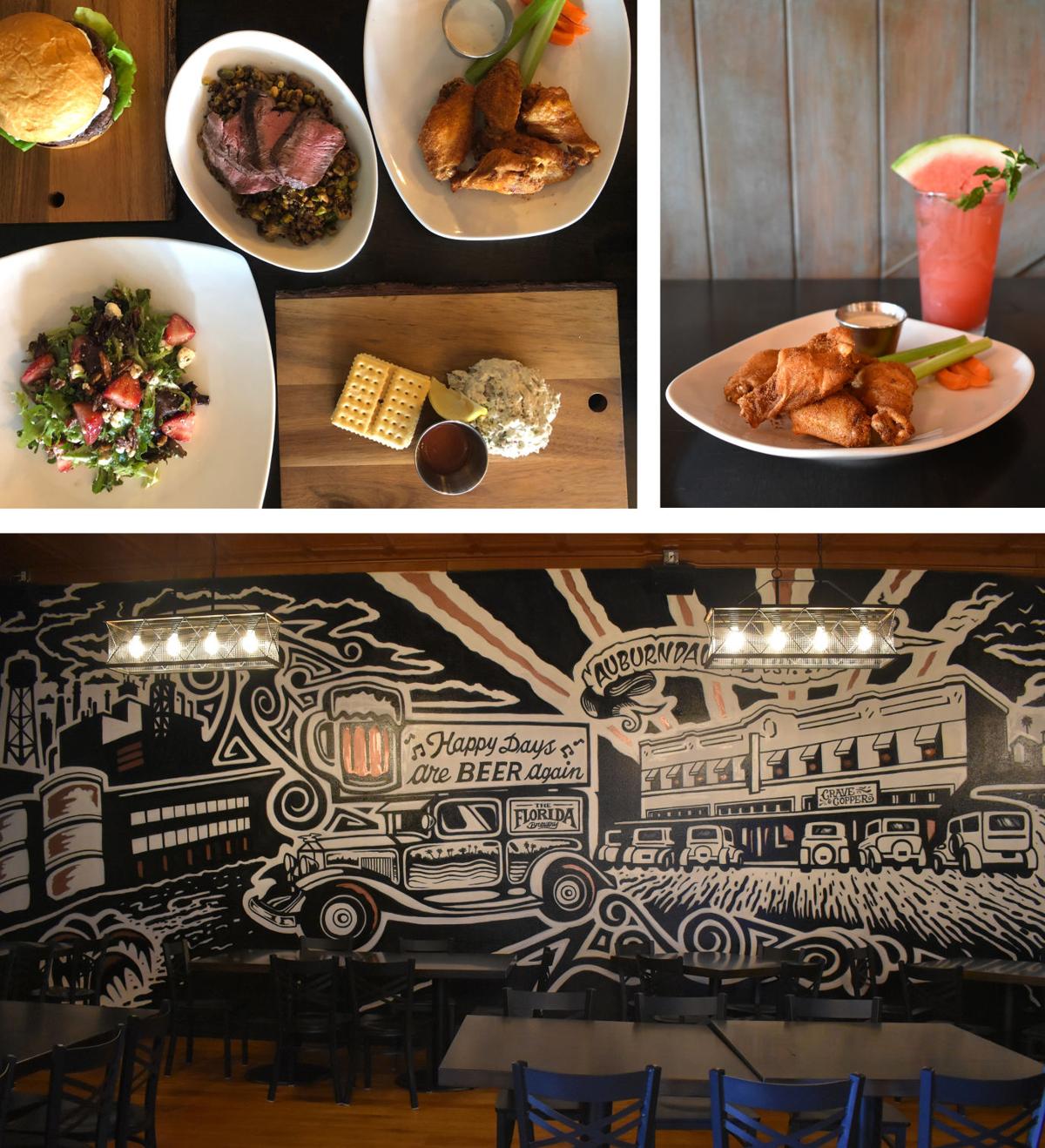 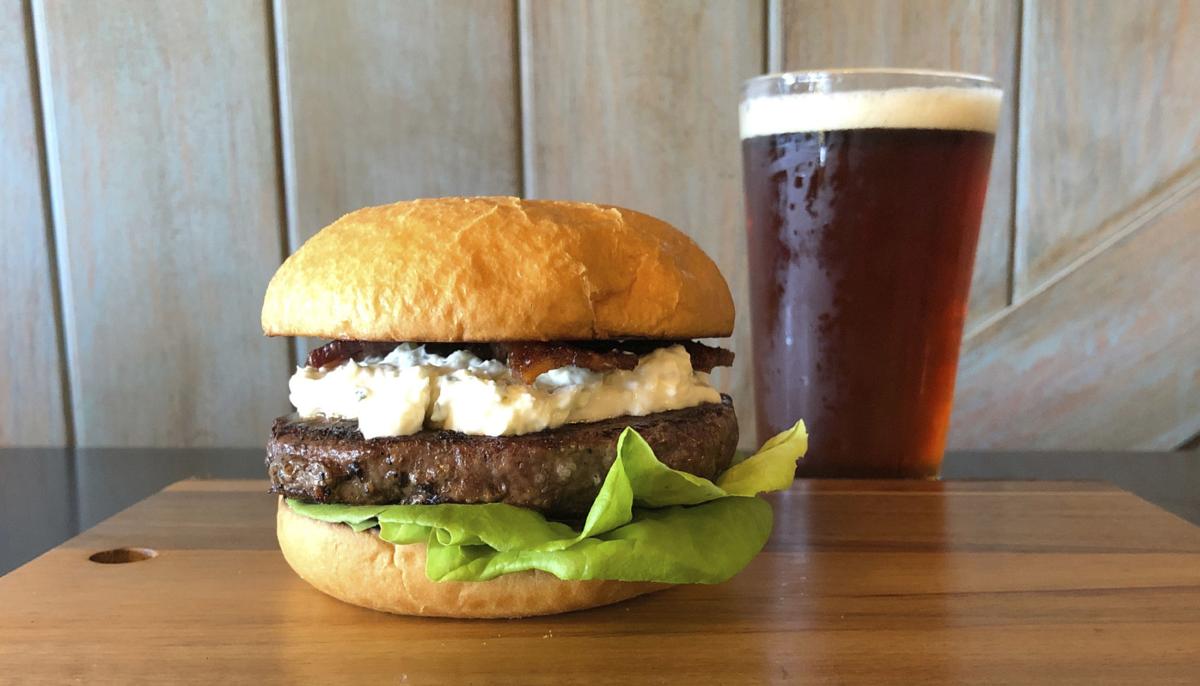 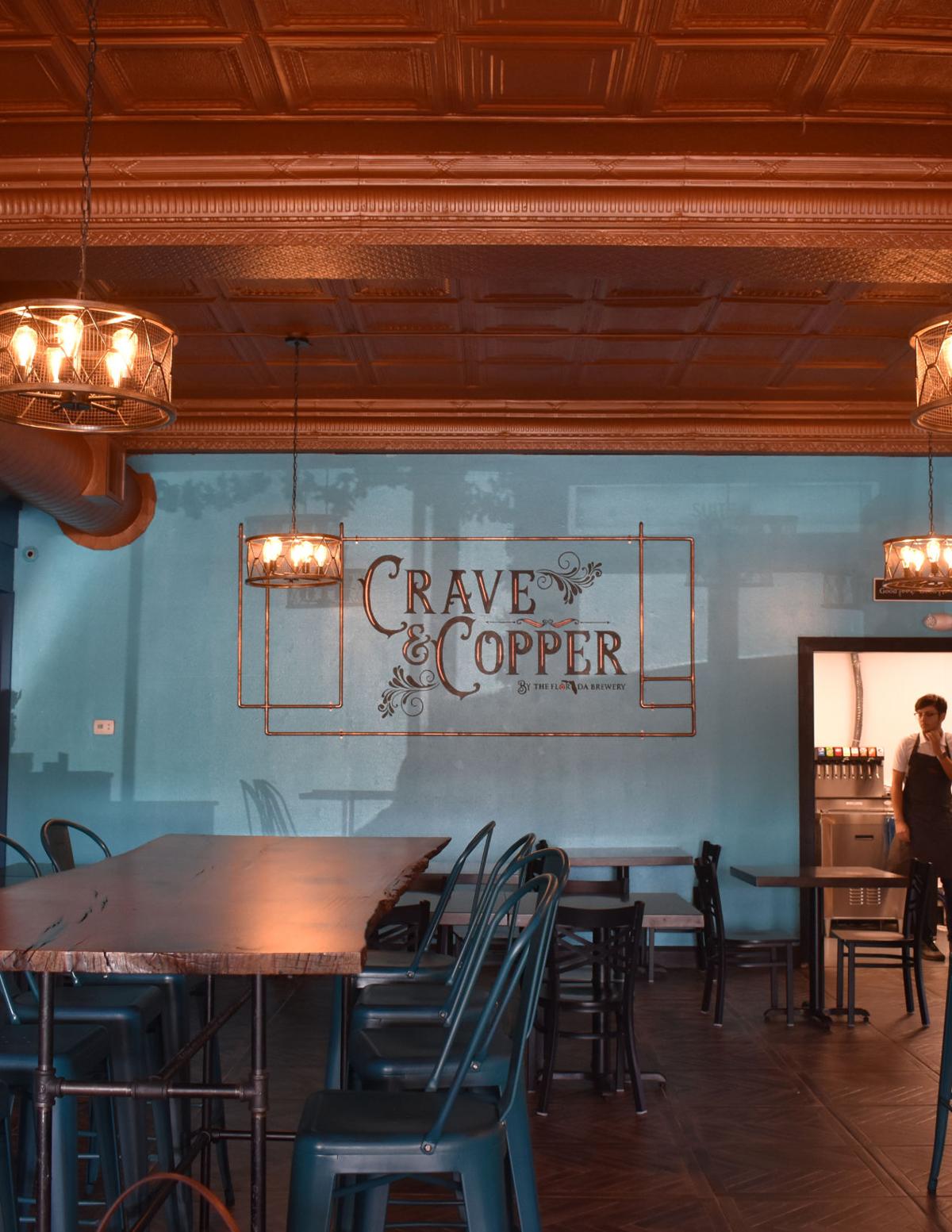 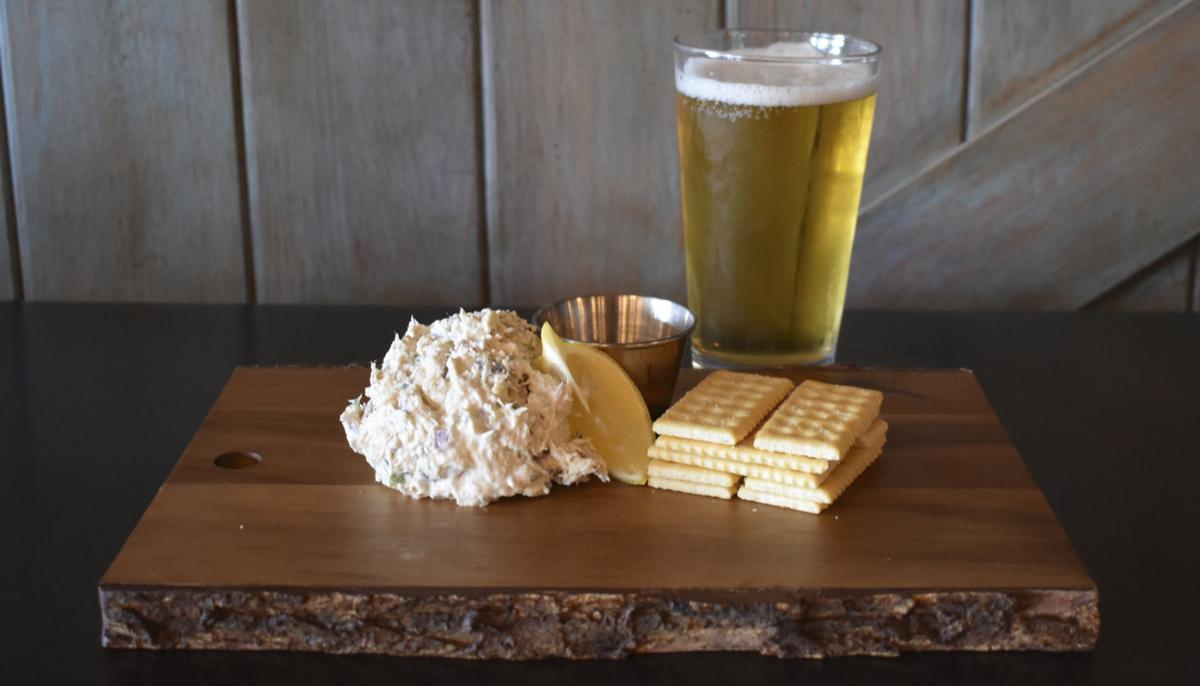 The Florida Brewery, established in the 70s, is the second oldest brewery still in operation in the state. Primarily a manufacturing facility, the brewery opened its doors to the public a year and a half ago introducing their Beer Garden and Taproom at 202 Gandy Road in Auburndale.

The community grew fond of the beer and atmosphere at the Florida Brewery and voiced that they wanted to enjoy them on more than just Friday and Saturday. When the opportunity came up to open an eatery downtown, the brewery partnered with restaurant industry veterans to be sure their cuisine mirrored their “crave-able” beer.

Operating partners for Crave & Copper Justin Leo and Matt Oakley both have executive chef backgrounds. Leo has stepped into a front of house role as Director of Operations and Oakley as Executive Chef. The two are in partnership with Leo’s sister and Oakley’s wife, CFO of the Florida Brewery, Stacey Oakley as well as COO of the brewery Julie Williams.

“The atmosphere is all about community,” said Leo. Stacey Oakley agreed, saying that they want Crave & Copper to be an experience, something they have already created through the Florida Brewery. “When we did the Beer Garden we specifically put no TVs there. We wanted everybody to talk. We wanted a gathering place,” she said.

They wanted to keep the historic elements of the building complemented by modern finishes he said. Railroad imagery and large sliding barn doors, which can be closed to partition the restaurant, fit well within their rustic vibe.

Focus is immediately drawn to the large rustic community table as you walk into Crave & Copper. “It creates the opportunity for people to get together and talk,” said Leo. Though the concept centers around pub fare and Florida Brewery beer, the atmosphere is family-friendly.

Crave & Copper sits in the former Hudson Hotel, built in the 1920s. The hotel’s rooms were upstairs, now office space, and Crave & Copper is in place of its original restaurant. Stacey Oakley explained that Auburndale was a stop along the railroad back in the day.  As a significant part of the town’s history, they wanted to pay homage. “It ties into the brewery because the copper kettle that sits at the beer garden was also brought down by the railroad in the 1970s,” she said.

Many of the hotel’s original details have been left intact, but modernized – like the ceiling which was painted copper to suit their color scheme, the rehabbed bar and the exposed brick on one of the walls.

Spanning an entire wall of the restaurant just beyond the barn doors is a mural by Central Florida based muralist, Joe Starks. According to Stacey and Julie, Starks worked off a photo of the building from the 1920s. The image peers into a scene straight from Lake Ave. in the roaring 20s, the only detail bringing it back to the present is the ‘Crave & Copper’ sign. Images of Prohibition, their brewery roots, and Auburndale’s iconic water tower make an appearance in the piece as well. Starks finished the entire monochromatic mural with spray paint in just one weekend, finishing it with copper accents.

Stacey Oakley said the Hudson Hotel was a gathering space. They would broadcast fights on their radio outside and people would gather around to listen. The hotel’s restaurant would host $1 Thanksgiving dinner nights for the community. “The whole basis for what they did is similar to why we wanted to do this here. It was all focused around having a community destination,” she said.

“We wanted something that was going to put Auburndale on the map,” said Executive Chef Matt Oakley. In the same way that Winter Haven and Lakeland have built up their downtown with exceptional dining, shopping, and recreation – the Crave & Copper owners want to see the same thing for downtown Auburndale. Folks shouldn’t have to drive out of town for a good meal and good beer he explained.

Describing their cuisine as upscale pub fare, Matt Oakley said, “We wanted to keep it traditional bar food, but we wanted to elevate it by using super fresh ingredients, sourcing as much local produce and proteins as possible.”

For the proteins on their menu, Craft & Copper is working directly with Buckhead Beef, a mere three-minute walk from the establishment. For fresh produce, C & C is partnering with Farmer Jack in Winter Haven.

Oakley said they are working on “fun, funky” flavors for the menu. You can’t have a pub without wings – that would be sacrilege. They have an assortment of flavors like Nashville Hot Honey and Thai Chili Peanut Sauce. We tried Crave & Copper’s delectable wings seasoned with their proprietary Copper Dust. Made with a spice blend from a chef-owned and operated company out of Spokane, Washington, Matt Oakley wanted to highlight the quality of the spices. He created a dry rub using garlic powder, onion powder, chili lime powder, white pepper, kosher salt, and honey granules.

They have an assortment of other brilliant bar food like burgers, handhelds, and shareable apps along with seasonal salads and hearty vegetarian options like their grain bowl featuring a substantive variety of brussels and grains.

A must-try is their smoked fish dip, ideally served with a frosty glass of Polar Pilsner. Made with locally caught Lane Snapper smoked in-house with pecan wood, Chef Matt says, “It’s a traditional Florida fish dip, but with my twist on it.” There were no frills, it was just plain good – like, really really good. It was served with a homemade hot sauce and crackers.

A work of culinary art that Chef Matt brought to the table was his Beer Cheese Burger, which along with the Steak N’ Cheese made with local shaved ribeye, proved to be guest favorites within the first week of opening.

The burger is made with a custom beef blend of chuck short rib and ribeye. Chef Matt makes beer cheese using the Florida Brewery Polar Pilsner incorporated into a mix of cream cheese, white cheddar, and chives. He makes a spicy tomato jam and accompanies it with hydroponic leaf bib lettuce. The beer-cheese-laden succulent burger is topped with “swine candy” – a helping of generously thick-cut candied bacon, all served on a brioche bun. Everything about the burger was remarkable from the first glance to the last bite. You might get messy, but it’s worth it.

Matt had a food truck before opening the restaurant and one of his flagship menu items was the beer cheese burger. The burger was so beloved that it is part of the reason for their name. Patrons would come into the brewery and say how much they craved the burger or his chicken sandwich. “It wasn’t just good – people craved it,” said Stacey. “We wanted our beer to be the same – not just good, but crave-able.”

The Crave & Copper kitchen is staffed mainly with culinary students from local schools. Matt Oakley reached out to Traviss Technical College to ask if they had any recent culinary graduates or soon to graduate students looking to work. The applications flooded in. The chef says he is glad to have them in his kitchen, remarking, “My goal as a chef is to teach and share my craft. I’m not one of those chefs that like to hold all my secrets in. I’m open with my recipes, I’ll tell anyone what they are. I want people to cook and to learn how to do it right so that we have more chefs and great food in town.”

Florida Brewery COO Julie Williams discussed their five-barrel brew system at Crave & Copper. Three fermenters turn yeast into alcohol and one bright beer tank holds finished product ready to be kegged. “This is what we consider our research and development. The big brewery down the street, one batch is 300 barrels,” she said. “This gives us the chance to use a little more creativity on a small batch.”

Crave & Copper has twenty rotating beers on tap including a cider. Stacey Oakley said that their beers cater to the traditional lager style and are made intentionally drinkable for Florida – whether you’re boating, fishing or backyard barbequing. They recently added 863 Light, their version of an American Standard Lager, and 863 Ultra, which she described as a more “calorie-conscious American lager” to the menu. Their best-selling beer by far, Beach Me Up, started as a seasonal brew. The crisp grapefruit shandy earned a fixed spot on the menu due to demand.

Wine is also available along with a cocktail menu offering six craft cocktails. “We’re focusing on small-batch producers,” said Matt Oakley of their craft cocktail offerings. “We partnered with Florida Cane Distillery in Ybor. We use them exclusively for our liquors.”

I live over an hour away from Crave & Copper and have no qualms saying their food and drink menu are worth the drive. Neither the food or the beer is an afterthought. Each dish seemed thoughtful, hitting just the right spot between bar food staple and rave-worthy (or should I say, crave-worthy) cuisine. You HAVE to try this place.