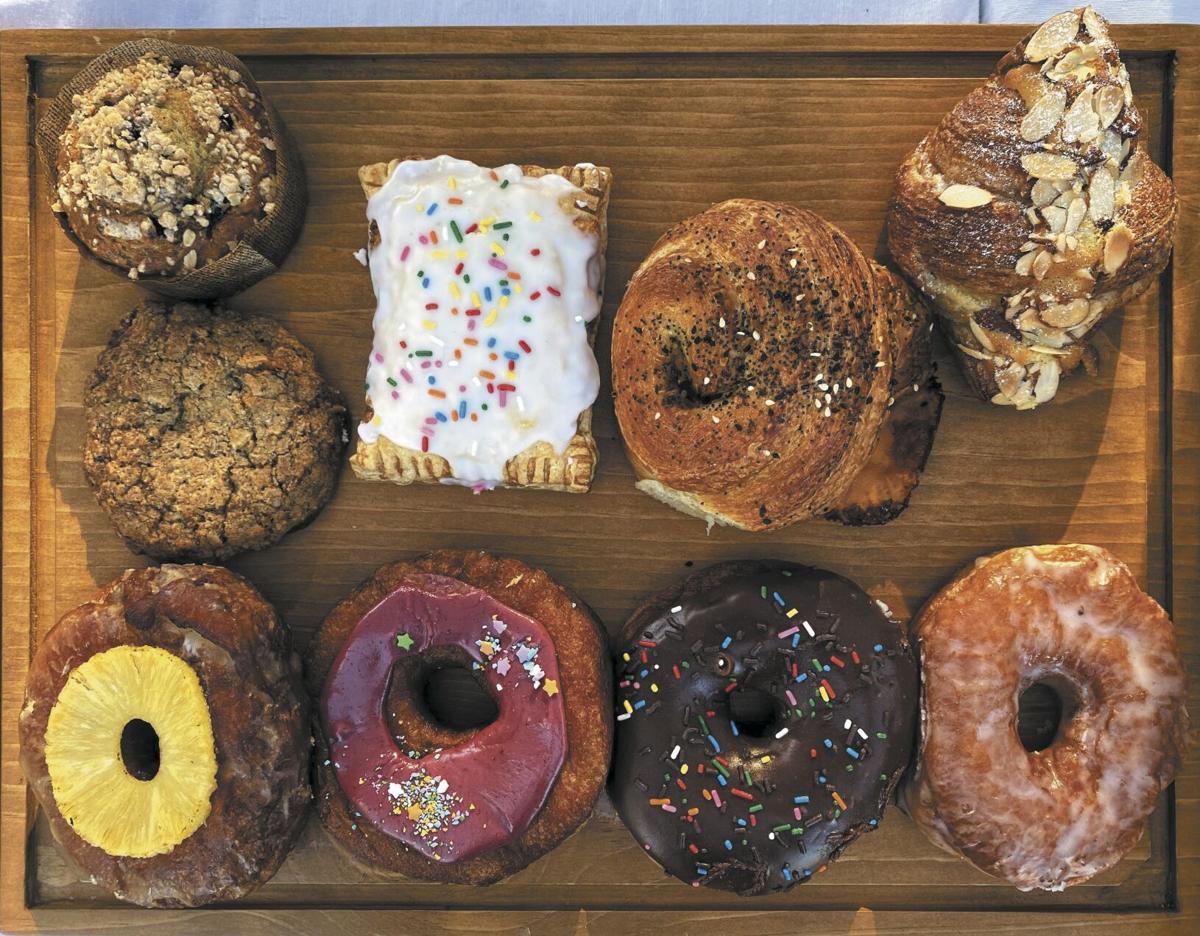 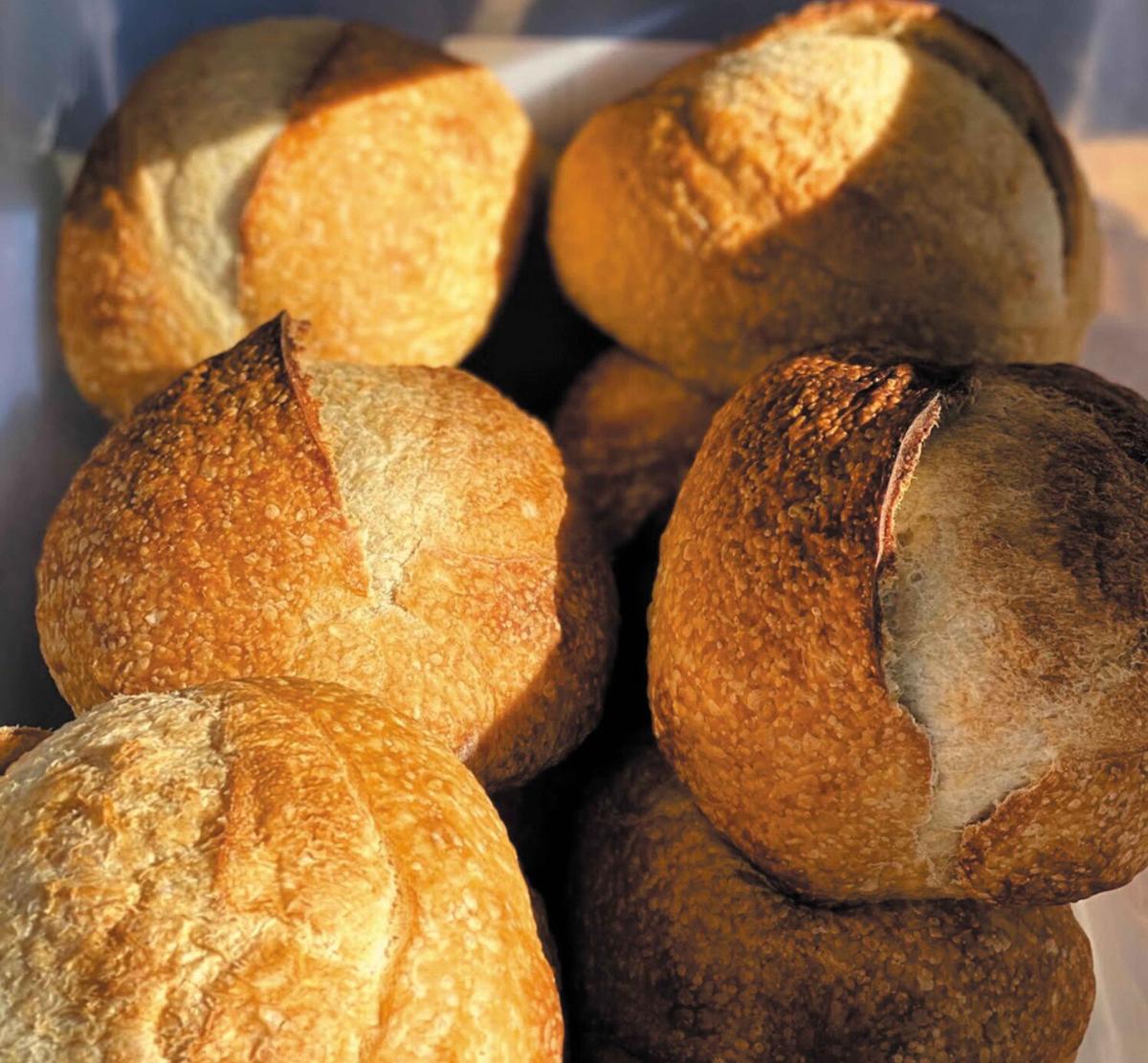 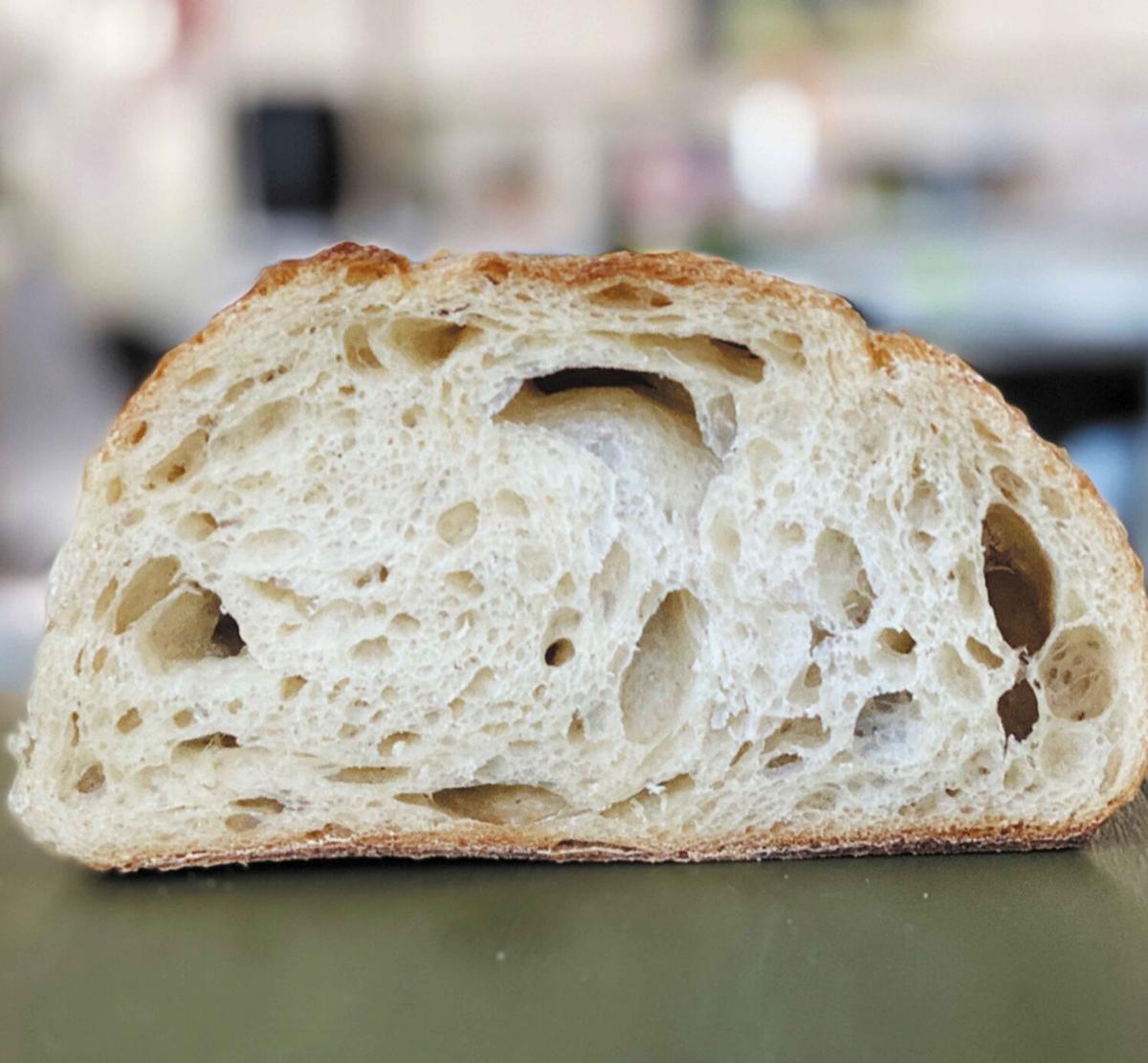 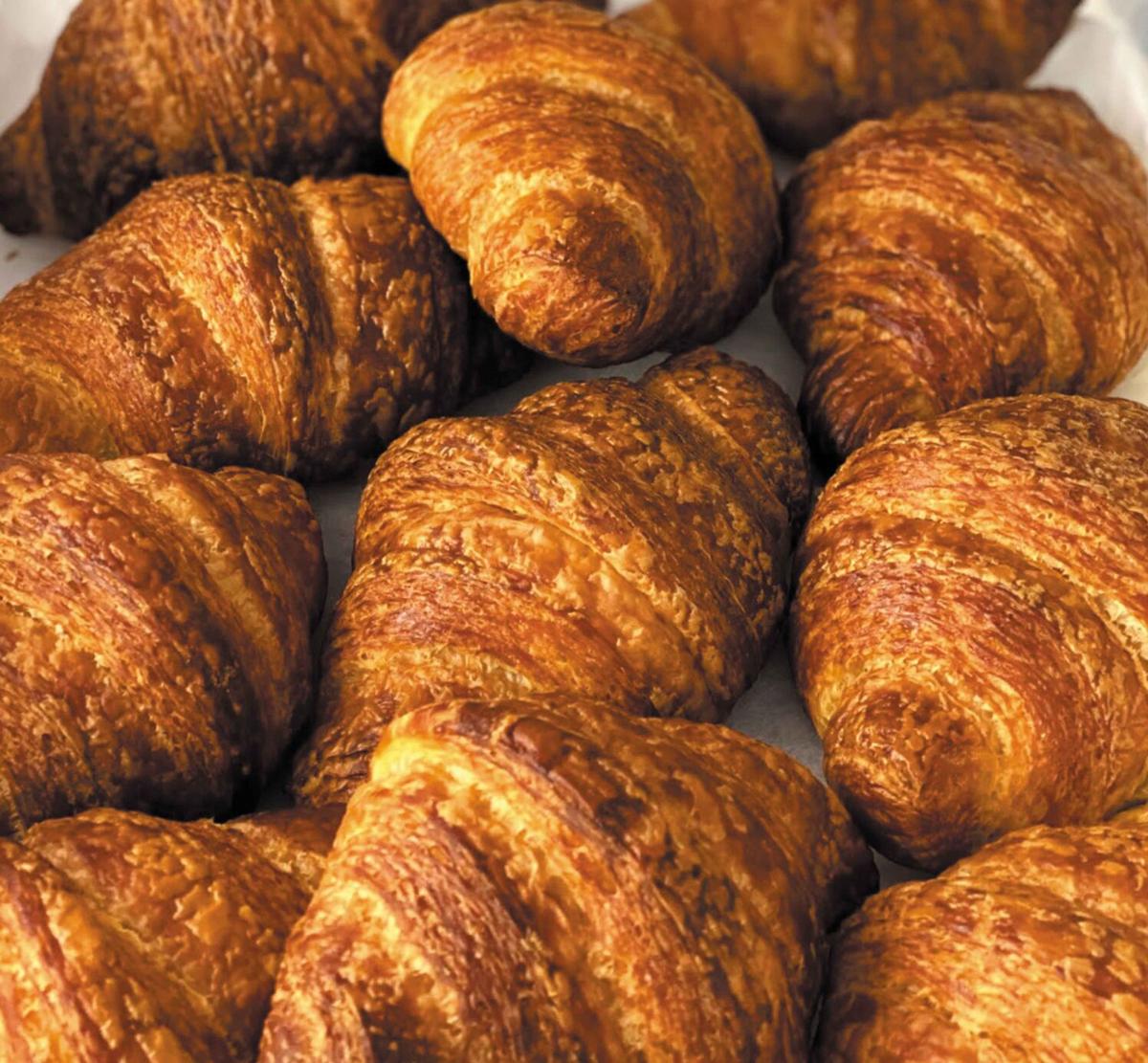 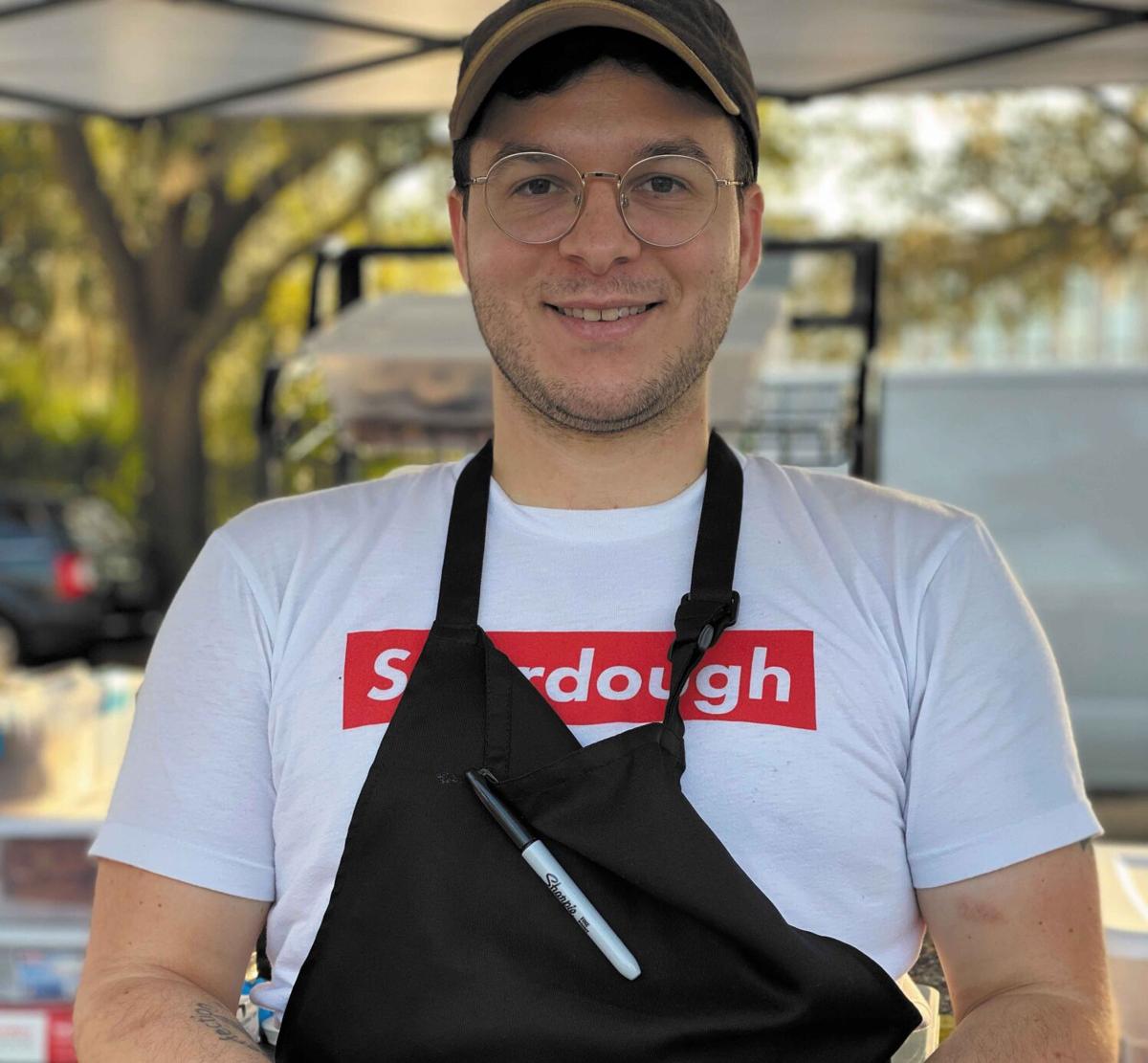 You’ve had their warm bagels at N+1 and lined up for their country sourdough at the farmers market, but soon you will have more opportunities to enjoy Honeycomb Bread Bakers. The bee brand bakeshop is expected to open in Winter Haven later this month.

Benjamin Vickers thought he’d go to college for English Lit and become a “bookish academic” type. His hobby of home baking for his friends and family slowly took center stage. He called his parents one day and said, “I’m going to New York for culinary school, guys.” He was accepted into the Culinary Institute of America in upstate New York for a slot opening three weeks later. “It was a whirlwind starting out, but I haven’t looked back since,” said Vickers. Benjamin did his externship at Manhattan bakery, Dominique Ansel. He was even part of the team that brought into being the popular croissant, donut hybrid – the cronut.

After graduation, he was invited to work at a high-end catering service in Ithaca, New York. The business catered many of the galas and banquets for nearby Cornell University. The company didn’t have a pastry or dessert program at the time Vickers joined them. Fresh out of culinary school, he stepped up to help them build one from the ground up. Initially, he was catering weddings and banquets. Understanding that dessert and cakes were the most in-demand pastry jobs, he knew he wanted to be a bread baker. He noted that the rest of his journey was “carving out that career.”

The next stop in his bread baking journey led him into the foothills of the Great Smoky Mountains at world-renowned Blackberry Farm in Maryville, TN. There, he was able to foray from desserts into bread. Vickers remembered fondly, “We would bake bread all night, [...] [and we] would go down these twisting paths through the farmlands to deliver to all the houses and restaurants. You’d see the sun rising over the mountains and all the sheep as you’re driving your little bread cart.”

Vickers got his next pastry gig by happenstance while out to dinner at Nineteen61. Chef Marcos needed a pastry chef, and there was Vickers. He became the pastry chef for Chef Marcos and worked for about two and a half years. Vickers started his cottage food business making bread, Honeycomb Bread Bakers, in February 2018, though Honeycomb’s official birthday is October of that year. He joined Catapult and began selling at the Lakeland Downtown Farmers Curb Market a month later.

“Our first day was one loaf of bread to Concord,” Vickers said. Word spread, and the baker began to realize just how much of a need there was for quality bread from an honest source. “That’s one of the things that I’m trying to cultivate – a brand on one hand that is really accessible because bread should be humble. It shouldn’t be too expensive or unattainable. It should be easy to find and delicious and nutritious and fill your belly,” said Vickers. Bread should also come from a brand you trust and believe in. “When people see the little gold bee, it should have a resonance or a meaning.”

Even before he genuinely knew he wanted to be a baker, Vickers envisioned a bakery called Honeycomb as a kid. “I’ve always had this affinity with bees as a symbology, […] they represent a place where the natural, wild world meets the more rigorous and architectural world which as an aesthetic, I’ve always really liked,” he said.

“With our bread, for example, I love the wild and rustic – it is what it is, but also, we do a lot to make it have a beautiful ear and a nice golden crust, and it’s a certain shape, and everything is precisely measured. When those two things meet, I think that’s a nice sense of beauty,” he said. “Also, Honeycomb in bakery parlance, when you slice a loaf of bread, and you see that whirl pattern of air bubbles – bakers call that the honeycomb. Whenever it’s properly fermented, it should be a nice open honeycomb.”

It was essential for Vickers to pay homage to the tradition of bread baking. According to Vickers, the version of bread that Honeycomb produces is only slightly modernized from the ancient Greeks. “What I love about us being one tiny piece of that long timeline is that it’s not necessarily about reinventing the wheel,” he said. He isn’t looking for a gimmick. He wants to do his part to make the simple staples incrementally better over time – a blip in bread’s evolution.

Honeycomb’s most popular items are their Country Sourdough, followed by their Wild Maine Blueberry Muffin. Among the many things that make his muffins stand out are the tiny Maine wild blueberries he uses. He said they grow wild in bushes on the sides of the road there. They are notably smaller than Florida’s plump blueberries that tend to hold more water. These berries offer a sweet, tart, “punch of flavor,” says the baker. “We have to bend over backward to get these berries, but it is so worth it.”

Honeycomb continues to sell at the Downtown Lakeland Farmers Curb Market and the Winter Haven Farmers Market, at which he was a debut vendor in January 2020. In addition to various wholesale locations, Vickers opened a Bay Street bakery in Lakeland in the Fall of 2019. Due to a real estate dispute, the bakery could not renew the lease and closed the storefront in April 2020.

Vickers described his reception in Winter Haven as ‘extremely warm’ with folks lining up every Saturday at the Winter Haven Farmers Market for his baked goods. Along with the name recognition from Winter Haven partners such as N+1 Coffee and Haven Coffee Roasters who sell or utilize Honeycomb products, Honeycomb fills a niche for this side of the county. Whereas most of his colleagues sell cookies, cakes, and confections, Honeycomb offers more savory options and bready pastries.

As soon as he knew the Bay Street location would close, Vickers went on the hunt for a new building. After a few months of looking in Lakeland and Winter Haven, he began talking with Six/Ten Group and found himself drawn to one of their properties on Sixth Street downtown.

The building is roughly 1600 square feet, including additions to the structure. The Sixth Street location was a gas station in the 1960s and, more recently, an auto glass repair shop. “The thing that I loved about it was the Spanish mission-style architecture, and the shape of the building is very unique and quirky. I thought it would be a great opportunity for us to have ample outdoor seating,” said Vickers.

“We’ve been basically baking out of a closet for the past three years,” said the baker. His Winter Haven bakery will be a dramatic upgrade for baking, manufacturing, storage, and quality of environment for him and his staff in terms of space and production.

Honeycomb will bring back the products and services customers loved at his Bay Street location and venture into new culinary terrain. Vickers described this soon-to-open bakeshop as a ‘much more holistic approach to Honeycomb’ with retail and wholesale under one roof. Construction on the building commenced around eight months ago.

The community is a-buzz about Honeycomb, a welcome addition to the downtown dining landscape. The bakery will offer what patrons are already familiar with from the farmers markets along with an expanded menu of goods – fresh bread, bagels, pretzels, a pastry case, viennoiserie including muffins, croissants, pain au chocolat, morning buns, and Kouign-Amann.

The Sixth Street bakeshop will boast a full espresso bar and a tea bar with fine imported teas.

“Some of the newer things that we weren’t able to do in our old shop will be more full-service breakfast and lunch,” Vickers explained. The scrumptious Honeycomb lox bagel will make a comeback along with quiche, be it roasted vegetables or a more traditional offering of Quiche Lorraine. Break out your comfy pants because Honeycomb is doing breakfast sandwiches, baby! Hungry sammie seekers can expect morning offerings on their fresh bread, bagels, croissants, and sourdough English muffins.

Just before he had to close shop in Lakeland, Vickers and his team implemented lunch options at the bakery. Winter Havenites rejoice! Honeycomb will have six sandwiches to start, including a Rueben, made on house Danish rye bread with homemade sauerkraut, as well as a Cubano and a smoked turkey club. The menu will feature salads, too, like the beloved Honeycomb Bistro Salad and Caesar Salad.  “Soup is my all-time favorite lunch,” said Vickers. “I’ve wanted to do it for a while. That will be a mix of creamy and brothy soups.”

He went on to say, “The weekends will be for more playful, composed lunch items.”

“We have these big beautiful hearth ovens, so we might as well crank them all the way up and do pizzas on Fridays and Saturdays.” In addition to pizza and flatbread specials, Honeycomb will offer plated specials like perhaps a ratatouille, meatloaf, lasagna, or a curry dish.

“Bakeries and cafes have always been these gathering places for communities. People in the hospitality industry call it the third space. Home is the first space, work is the second space, and cafes are the third space. They are an extremely social environment, and we’re hoping that it can be that crossroads in Winter Haven or that cornerstone of the community that people really gather at,” said Vickers. “To that end, we’re hoping to use the large outdoor area as a venue space for different markets or events. We have a lot of passionate creators as partners – either as vendors or on our team.” He hopes to provide these creatives opportunities to express themselves, be it in a coffee tasting, a farmer discussing their sustainability programs, or a bread baking class. “We’re hoping it will be a very event-focused venue and more of a community place rather than a place to do transactions where we just sell bread.”

Honeycomb Bread Bakers will have an outdoor gathering space in the front of their building as well as a shared space with Adler’s Burgers behind them. Vickers hopes to see the beloved burger joint open not long after his bakery so the two can create a collaborative synergy.

The building’s industrial history has led to a less than glamorous construction process. They’ve dealt less with the cosmetic and more with environmental remediation and installed underground utility lines to ensure it is up to standard for a food service facility. Vickers hopes to be fully open or soft-open towards the end of July.

In a November 2020 social media post announcing the new store, Vickers wrote, “Our goal for this new home is to improve the value and quality of our products and services, to provide fulfilling careers for our staff, and to make our beautiful world a little better and yummier.”

Whether you’ve tried his food or drooled over it on Instagram, if you live in Polk County, y…