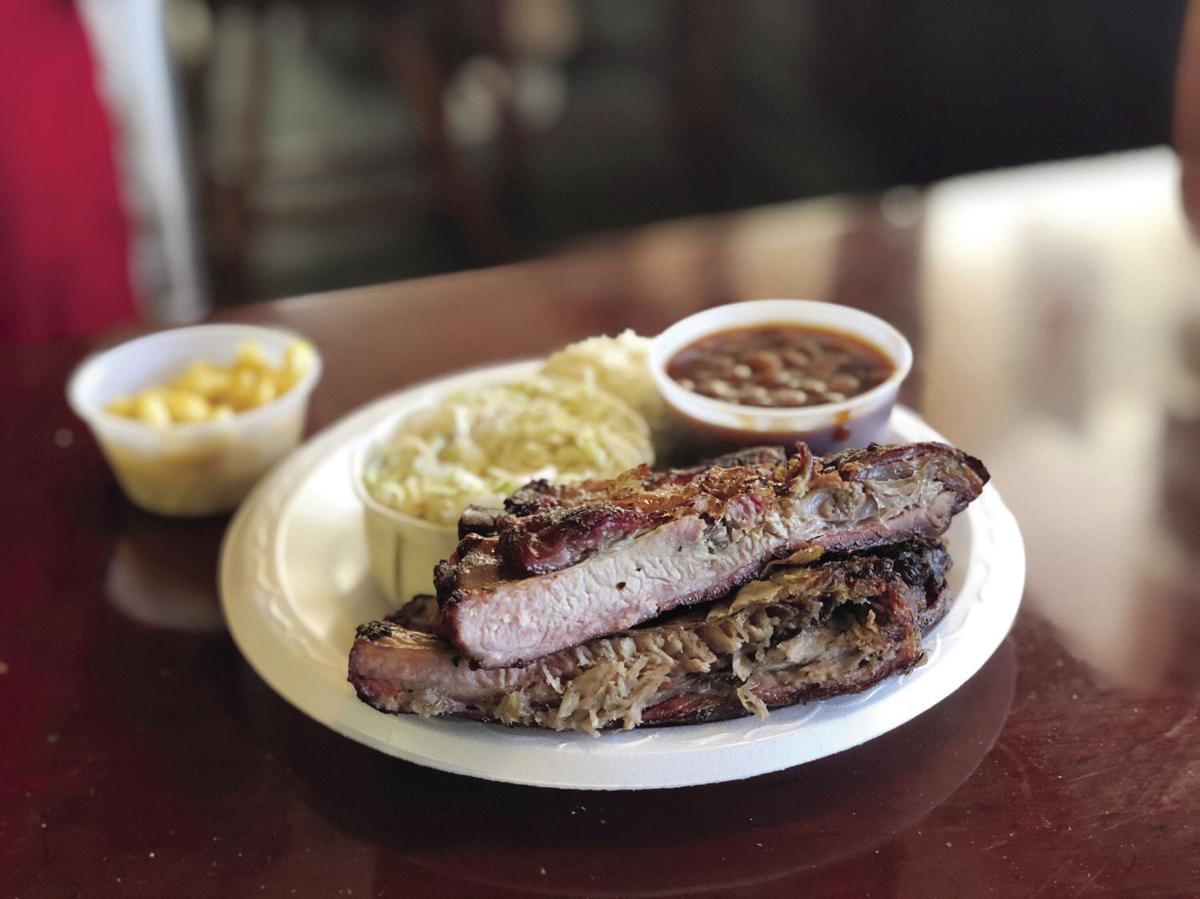 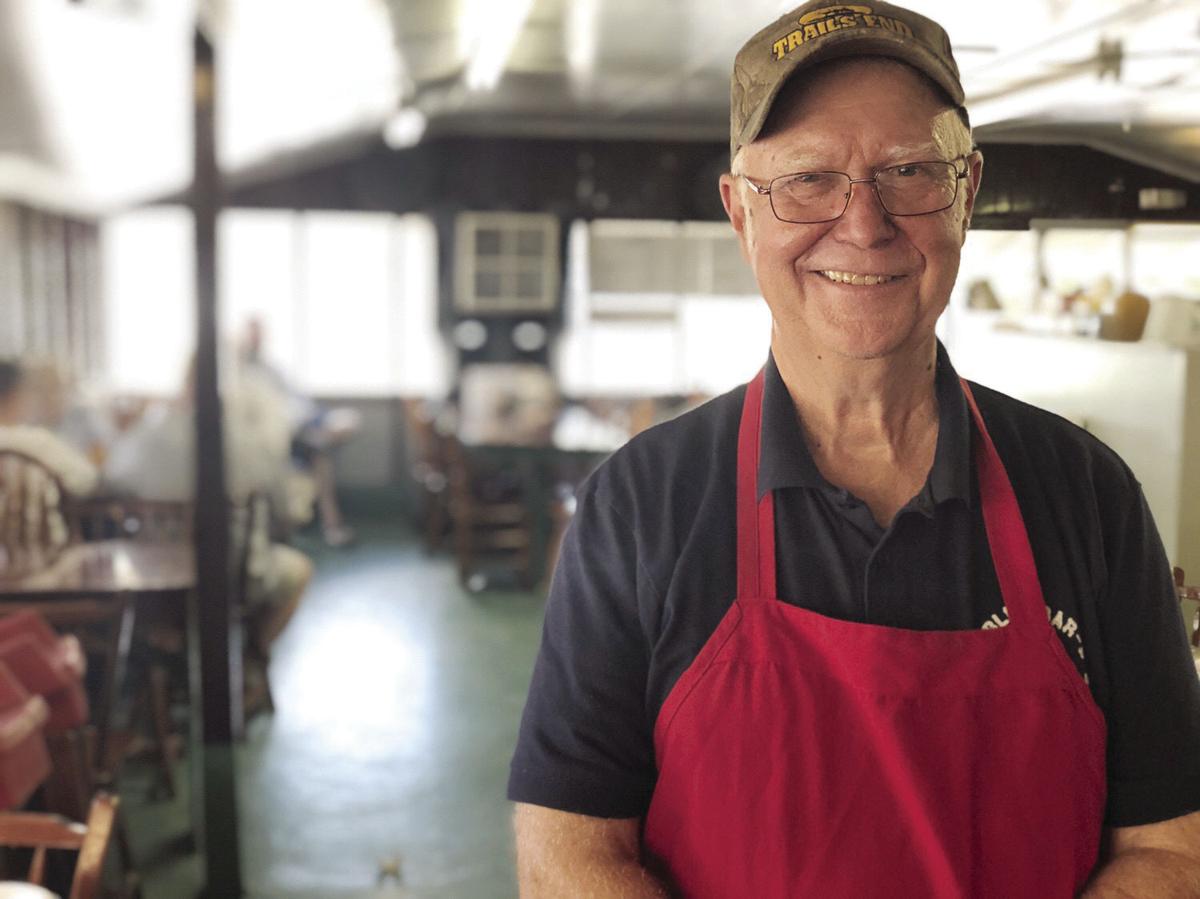 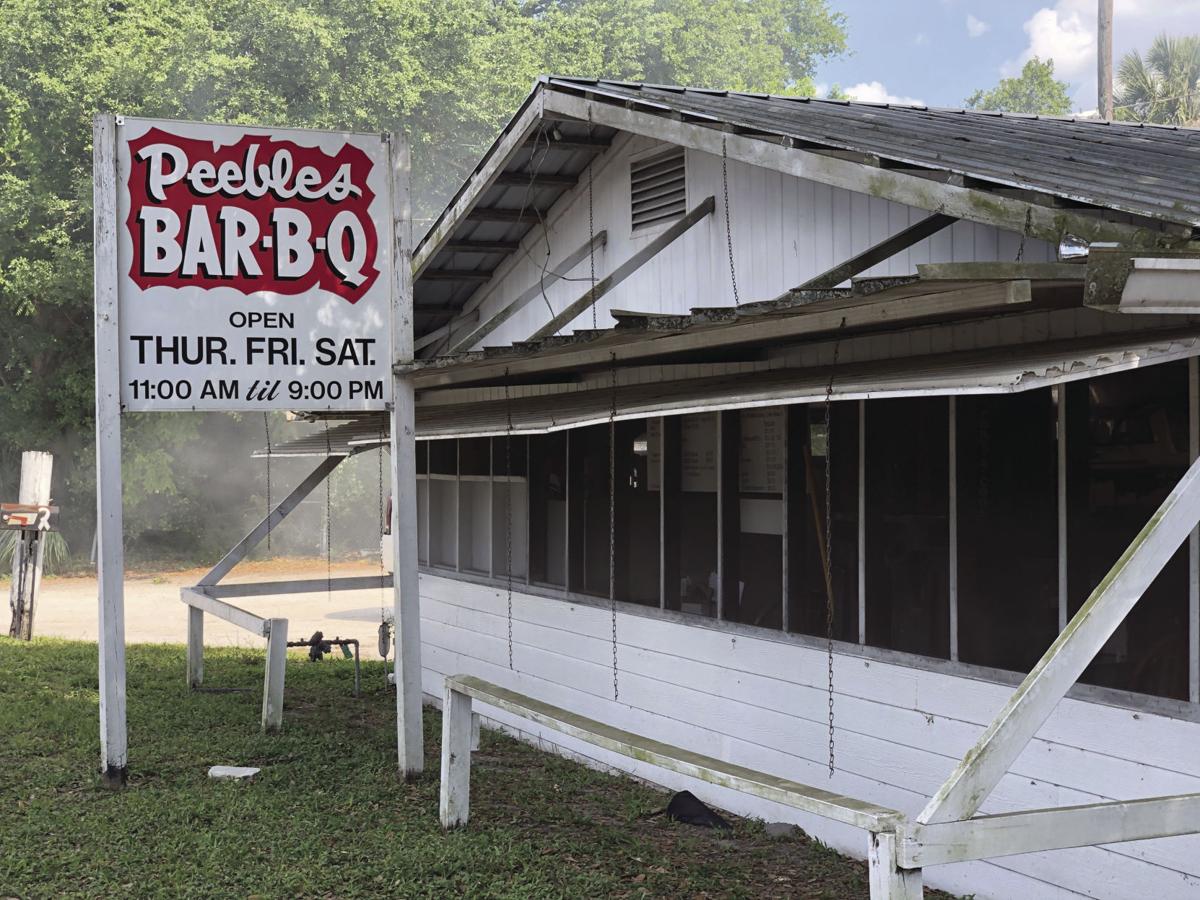 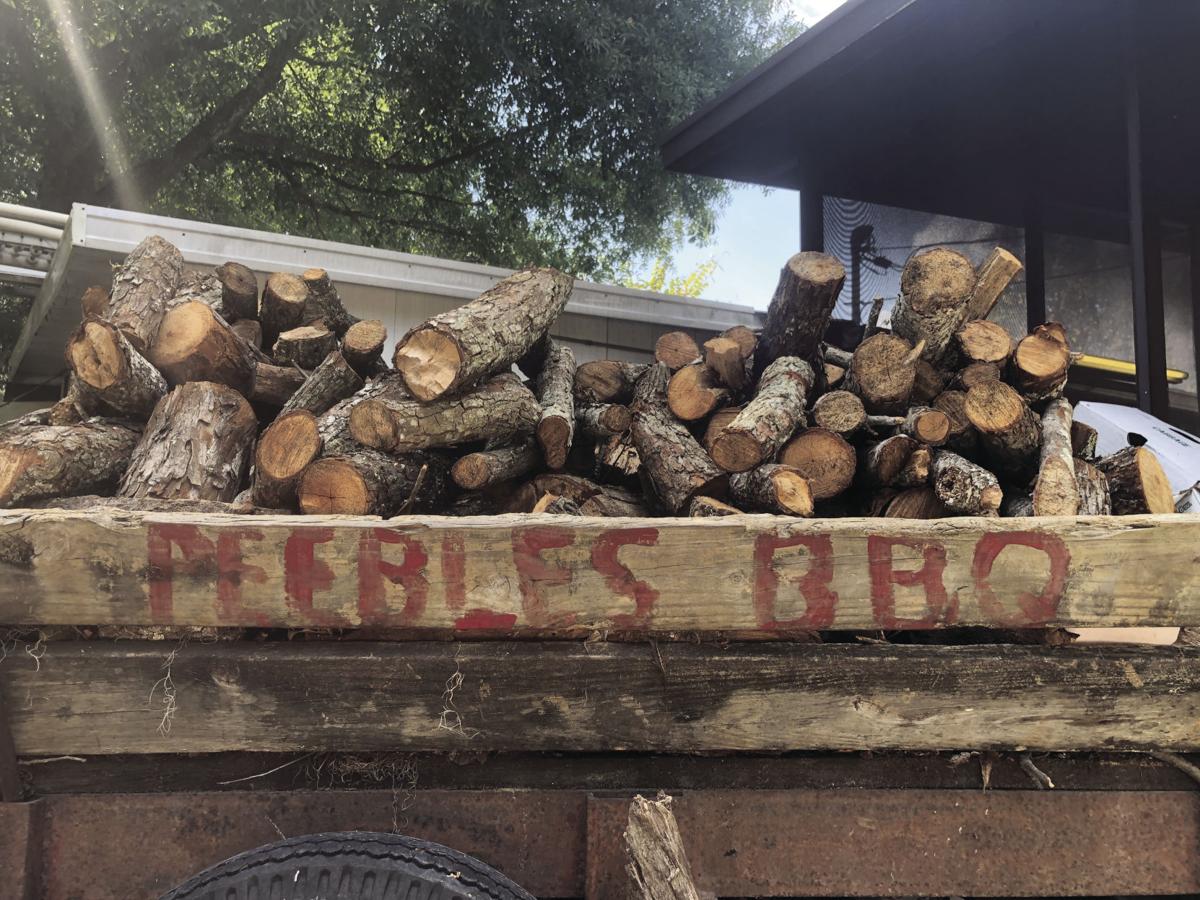 A fixture in Auburndale for over 70 years, Peebles Bar-B-Q has fed generations of Polk County families. If you ask lifelong customers, they’ll tell you it’s more than the bar-b-q that makes Peebles a local tradition.

Though it was 3 o’clock, a time you’d expect any restaurant to be in a lull, Peebles had a steady stream of customers arriving to pick up take-out orders along with diners sharing stories over a good meal.

The scent of savory smoke pervaded the restaurant – a small enclosed structure only separated from the outside by mesh screen windows. A sporadic breeze brought some cooling relief along with a new waft of appetizing smells from the bar-b-q pit which opens into the dining room, as Dale Strickland sat down to tell the Peebles story.

Dale and Marsha Strickland are the current owners of the bar-b-q hot spot. According to Dale, in 1947 Ellie and Gladys Peebles lived in a house next door to what is now,  the current restaurant. At that time, people would bring Ellie meat and he’d cook it in his carport for them to take home.

He eventually put picnic tables in the yard so folks could enjoy their meal beneath the generous shade of Australian pines.

In the early 1950s, the Peebles built the original building where the restaurant now stands. They continued serving up the best hometown bar-b-q around out of that structure until the late 1960’s when they expanded, adding on the sides and front.

When Mr. Peebles passed away, his sons Jerry and Ronnie took on the family business. In 1981 Dale Strickland, husband of Marsha Peebles Strickland joined the Peebles brothers in running the establishment and eventually took it over in 2010.

Peebles Bar-B-Q has seen four generations of the family carrying on the torch. Today, three generations work there. Dale and Marsha are joined by their daughters Erica and Jessica, Erica’s daughter Hannah, along with cousins and people who’ve worked there so long they have become part of the family.

Only open weekly, Thursday through Saturday, Dale explained, “As I understand it, Mr. Peebles when he originally opened it, was a custodian and a school bus driver for the school system. When he was off work there, he’d work here. Originally I think it was open Saturday and Sunday.”

They didn’t want to be open on Sunday’s so they changed their days to Friday and Saturday, and when the brothers joined on, Thursday was added.

Don’t be fooled, three-day weeks don’t mean an easy job. “There’s a lot of hours in those three days,” said Dale of the time that goes into preparing and smoking their county-famous fare.

Peebles is closed July and August to refresh, repair, and repaint the building.

The Meat of the Matter

Pork ribs, chopped pork, sliced beef, baked beans, coleslaw, and potato salad were the only items on the original menu. The eatery has evolved over its seven decades of operation while staying close to its roots – and keeping those coveted family recipes intact.

The menu now includes more meat and side options as well as a dessert addition of banana pudding and monthly specials.

Ribs and chopped pork continue to be patron favorites.

It could be argued that North Carolina, Tennessee, and Texas run the gamut on bar-b-q with their individual takes on the southern culinary custom. Many bar-b-q restaurants find their stride by putting their twist on an homage to one of these states – not Peebles.

When asked just what kind of bar-b-q is served up at the family-owned Americana eatery, Dale replied, “It’s Auburndale bar-b-q.”

“I’d say it’s the old time bar-b-q,” he added. There is no gas involved in the cooking process. All of their meat is smoked over 99.9% Oak wood with Hickory and Pecan occasionally added to the pile.

They don’t fuss over the meat either. The meat’s natural juicy flavor and smoky cooking method do the talking at Peebles. Ribs are seasoned only with salt while other meats have no seasonings while cooking. The only thing you’ll find sauce in that you didn’t add yourself is their chopped pork which is seasoned and finished off with bar-b-q sauce.

The over 70-year old recipes and methods are so finger-licking good that the restaurant has a history of celebrity regulars. George Jones, Tammy Wynette, and Bernie Little were said to frequent it in the past along with visitors like Rosey Grier, Ricky Skaggs, and Red Skelton.

Oh, what’s that? A secret menu item?  “We also have sliced pork which is not even on the menu, you’ve got to know about that,” revealed Dale. Order it up the next time you stop in for a bite to eat!

Peebles seems to have captured some long lost nostalgic wonder for all those who have eaten there throughout the years.

A usual customer, Keith, who comes every few weeks, says that his appreciation for Peebles comes from, “Knowing the people – it’s been here for a long time. It’s a family atmosphere, laid back, and the food’s really good too.”

But, it’s also because of the family that’s been created through this culinary connection.

“We’ve got a great customer base,” said Dale. “When they don’t show up, we call them.”

That’s his favorite part of the job is going from table to table, visiting with old friends and making new ones.

As we talked, a gentleman walked up and joked, “Don’t believe too much he’d tell you!”

Dale retorted with a laugh, “Don’t believe anything he’d say!”

The two, clearly old friends, exchanged niceties and the man explained that he was in his early eighties and has been coming to Peebles since he was just 10 years old.

The people behind the pit also make up the heart of the establishment. People like Carla who has worked at Peebles for close to 18 years according to Erica, Jenny who has been with them for 35 years, and Lori for 10 years. Erica said, “If something happens we grieve together, we celebrate together. It’s like a big family.”

Who Needs a Fork?

Dale served up a fine representation of what Peebles is all about – chopped pork, sausage, chopped chicken, and beef, with a side of sliced pork. Served on a paper plate, which is arguably the best way to enjoy bar-b-q, the meat was melt-in-my-mouth tasty. On the table was their dark molasses-hued sweet bar-b-q sauce and signature original bar-b-q sauce.

Next to be tried were the ribs. We started out with forks like the dainty ladies that we are, but bar-b-q, especially ribs, are meant to be eaten messily. So, pinkies up, we tore into the ridiculously tender ribs which were complete with the occasional crunch from a tasty charred bit that had accrued from being in the smoke pit.

The meats were joined by the usual southern accouterments – potato salad, mac and cheese, coleslaw, and baked beans which were all just as good, if not better than Grandma’s cooking (don’t tell her I said that).

If Peebles isn’t already a cult favorite in your household, check out their friendly, informal atmosphere and out of this world bar-b-q.

The ongoing coronavirus pandemic has affected the health of many directly. For others, inter…

With Omar Gonzalez’s culinary chops and his wife Caylee’s front of the house, hospitality, a…