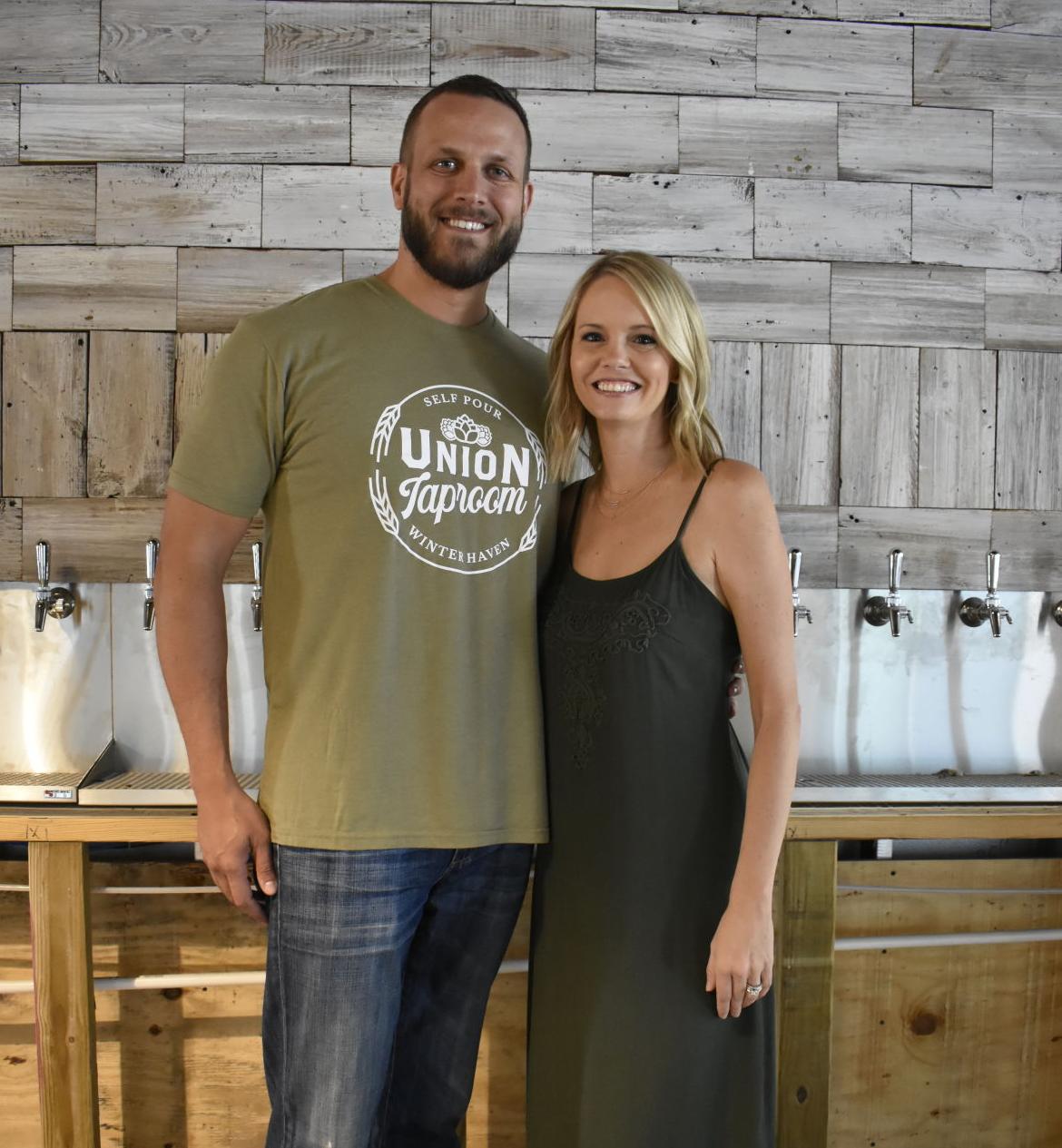 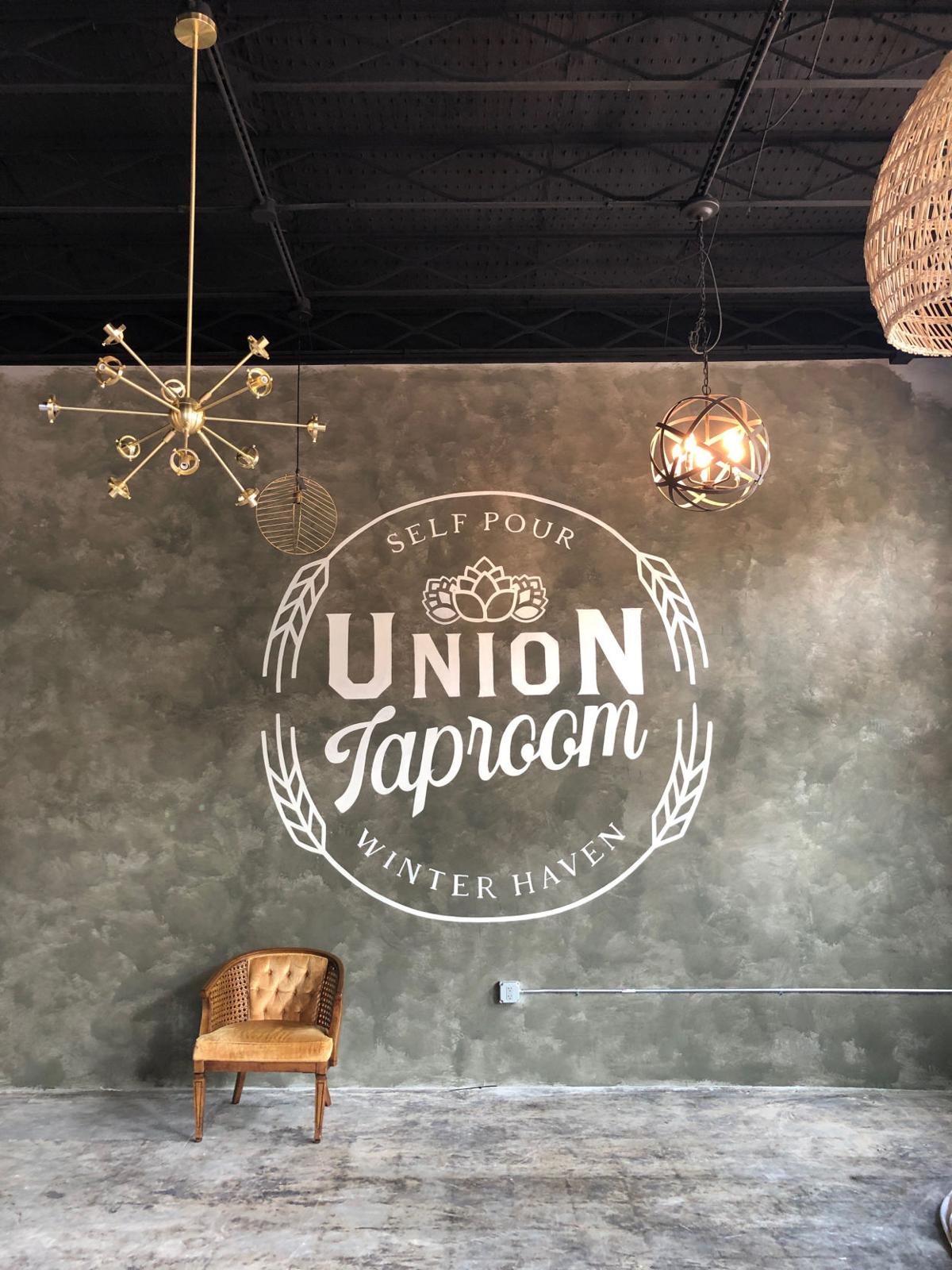 For Meagan and Colin Wells, the thought of bringing people together and supporting downtown business was at the forefront when imagining Union Taproom. Union will be Polk County’s first self-pour taproom featuring 40 taps of rotating craft beer, cider, wine, cold brew coffee, and kombucha.

Union Taproom has a motto – PYOB (Pour Your Own Beer).

The PYOB process is simple. Guests present their ID and form of payment at the check-in counter to be scanned to verify age and start a tab. They are given an RFID bracelet that is linked to their tab, allowing them to pour as much or as little as they would like.

After grabbing a glass, thirsty patrons can head over to the tap wall. Above each tap is a tablet displaying the price per ounce, location and history of the brew, ABV (Alcohol By Volume), and IBU (International Bitterness Units). Guests pour what they’d like using your bracelet to activate the tap, allowing craft beer adventurers to taste before committing to a whole glass of something they may not love.  When you’re ready to leave, return the bracelet and close out the tab.

The tap system has safeguards built in to avoid overserving. When you start a tab, the system will cut you off after 32 oz. From there, the guest can visit one of their staff who will do a visual check before allowing for more ounces.

“Having 40 choices is really exciting,” said Colin.  Union will focus on craft brews from around the country with a few domestics and Florida beers available. “It’s like an adult candy store,” said Meagan.

The Taproom will feature a lounge area with warm leather seating and an assortment of funky furniture. The industrial concrete floors and mix-matched lighting fixtures are just the atmosphere Meagan envisioned for the space. “I just want a loft type of feel,” she said. A warm, comfy, casual environment that invites everyone to stop in for a drink.

Along with the lounge there will be the main seating area with live acoustic music set up against the back wall on the weekends. They will have trivia every second Thursday of the month starting in October. To keep the good times rolling for you or the kids, Union will have an area with board and card games.

A sectioned off, but not entirely partitioned backroom will have a long table seating around 14 for larger parties that want a bit of privacy. That space leads to their back patio which will have a pergola and outdoor seating. Their back entrance conveniently leads to the parking garage.

Union Taproom is family-friendly and pet-friendly. Though they will not serve food, some downtown eateries have agreed to deliver, and patrons are invited to bring in their own food. Kids will be able to cheers’ as well with Union’s cooler of bottled craft sodas.

“One of the things that we wanted to do was be part of Destination Downtown. There’s a lot of great business downtown. While we have people here, we want to introduce them to the other businesses,” said Colin. With so many fantastic dining options, he added, “The more we can push people to those business helps everybody downtown – it helps us, it helps them.”

Meagan was born in Miami but has spent all of her life here. Colin moved here 15 years ago from Pittsburg. He and Meagan have been married for ten years and have two daughters, aged four and ten.

Meagan, a hairstylist for seven years, most recently at Posh Salon Suites, explained that Colin’s family lives in Aiken, South Carolina. There is a similar self-pour taproom there, The Alley Downtown Taproom. When they visited a few years ago, they fell in love with the concept. Meagan said, “My first thought was ‘Oh my gosh, Winter Haven has to have this.’”

The wheels began to turn on the concept and more and more they had conversations about it. There was no one moment where they committed to opening it, but the momentum of incremental progress sealed the deal. The pair thought over a million different names. Meagan said, “We want to bring everyone in Winter Haven together and Union kind of fit that.”

Colin added that in other settings where you might only interact amongst your friends, the self-pour element forces you to mutual ground to grab a beer. They hope to see people interact, recommend beers to each other, and ultimately form new friendships.

“Winter Haven is experiencing so much growth now. People are investing in the community, we want to be a part of that,” said Colin. The Wells are excited to bring this new concept to Winter Haven and Polk. They expect to draw people from surrounding communities inside and out of the county. “While we have them here, we can introduce them to this beautiful city – this vibrant growing downtown area,” he said.

There is no official grand opening date yet set, but they are fairly confident it will be in August.

The Wells extend an invite to you and yours, “Come have a beer!”