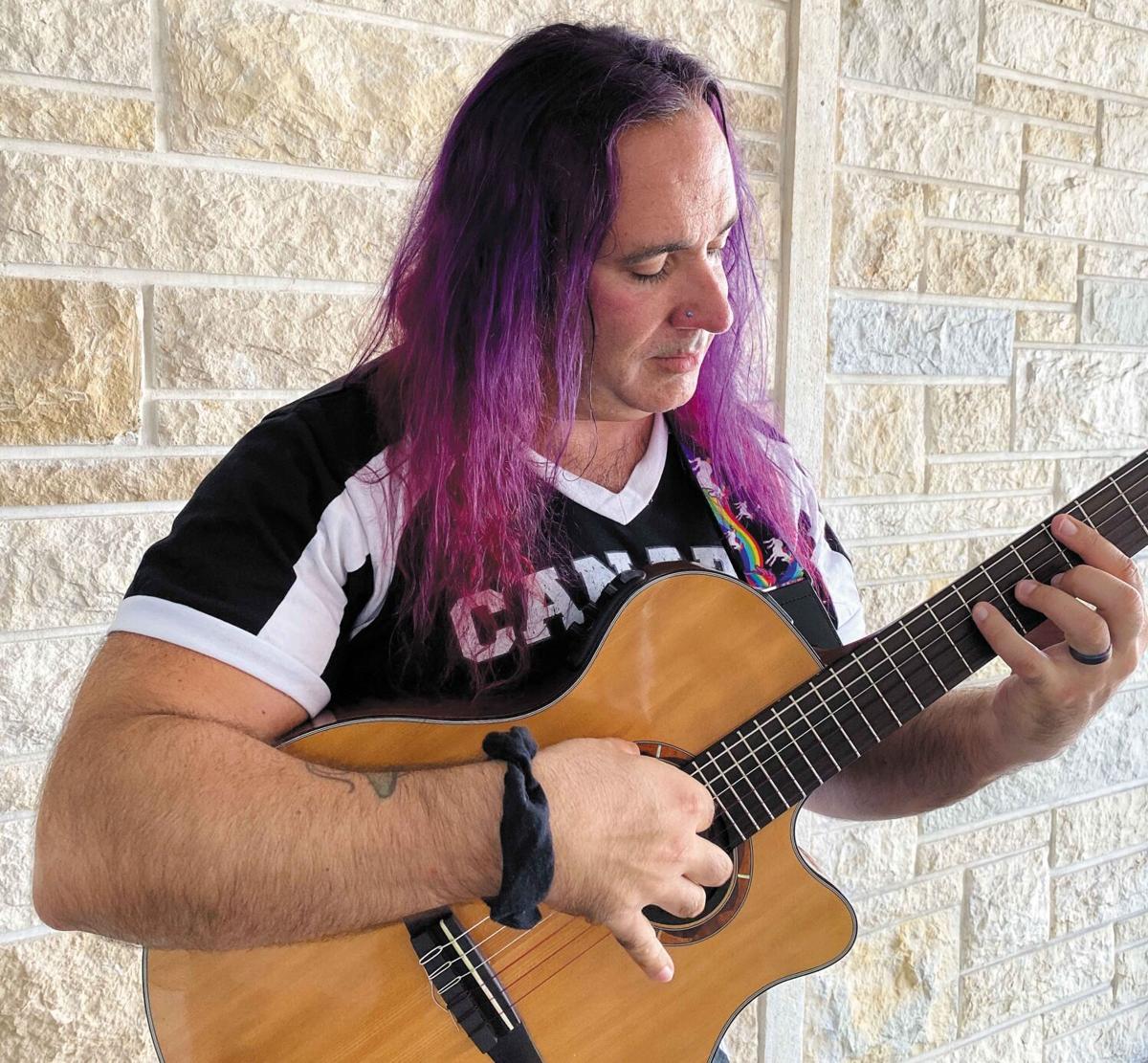 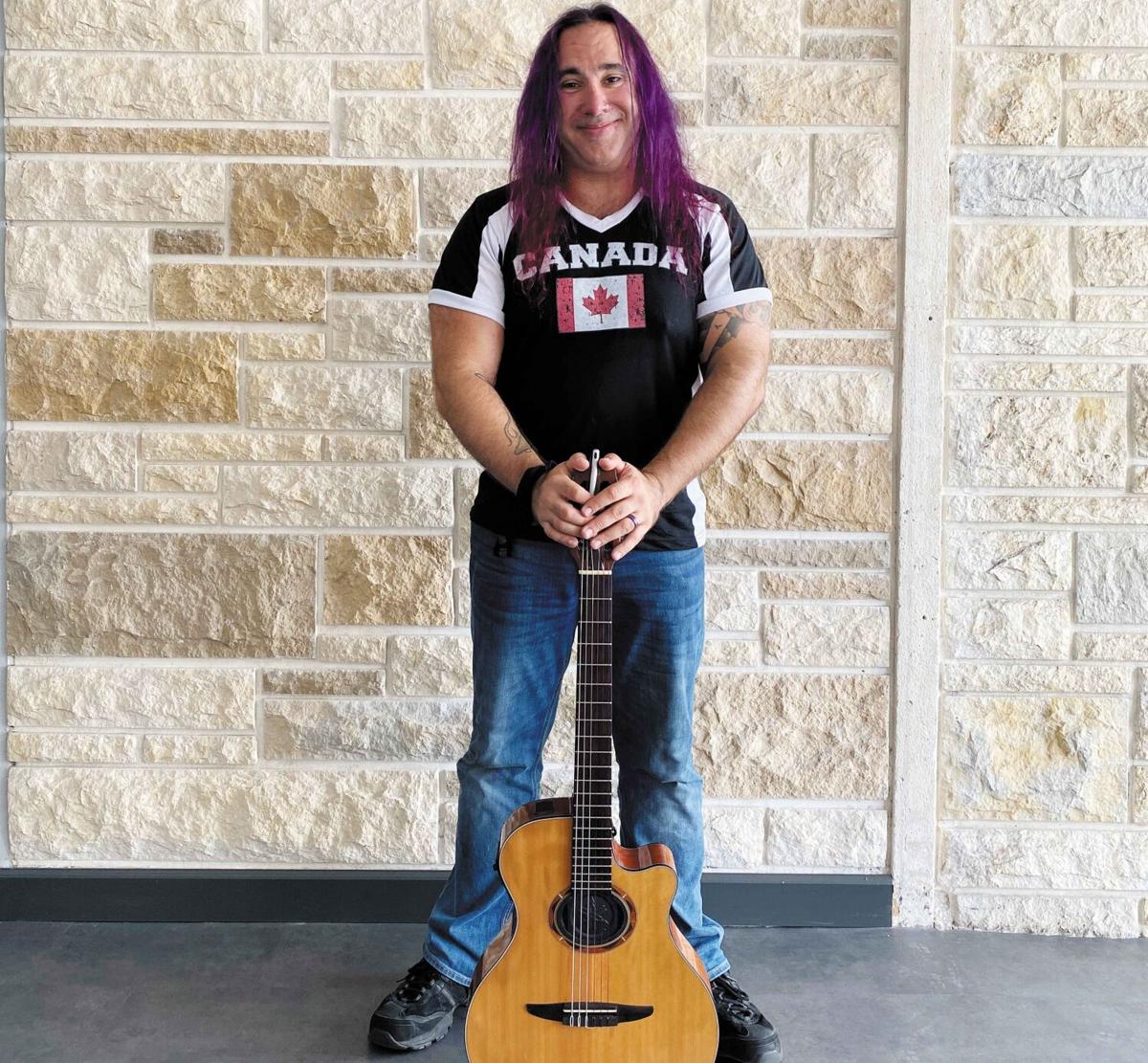 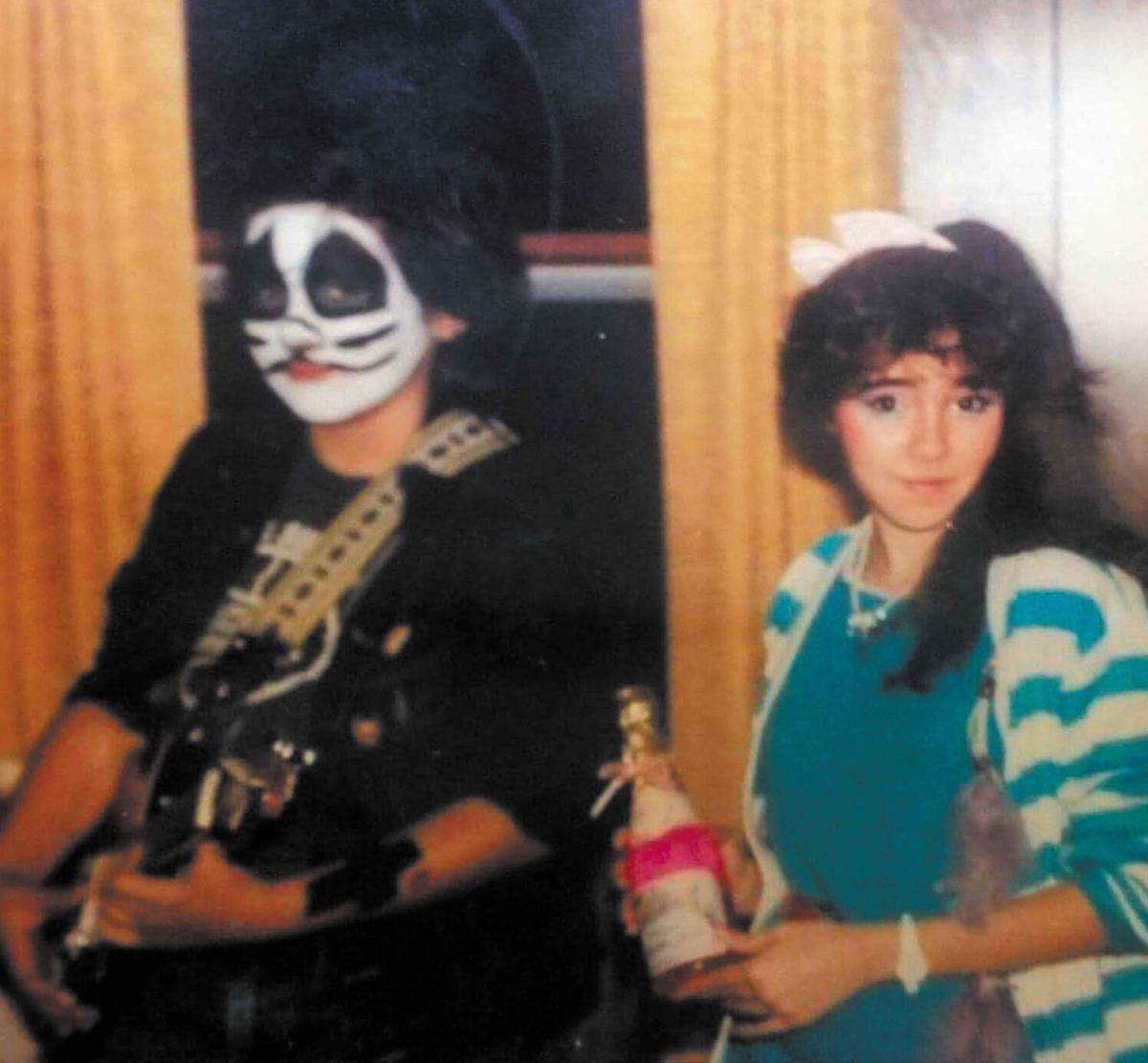 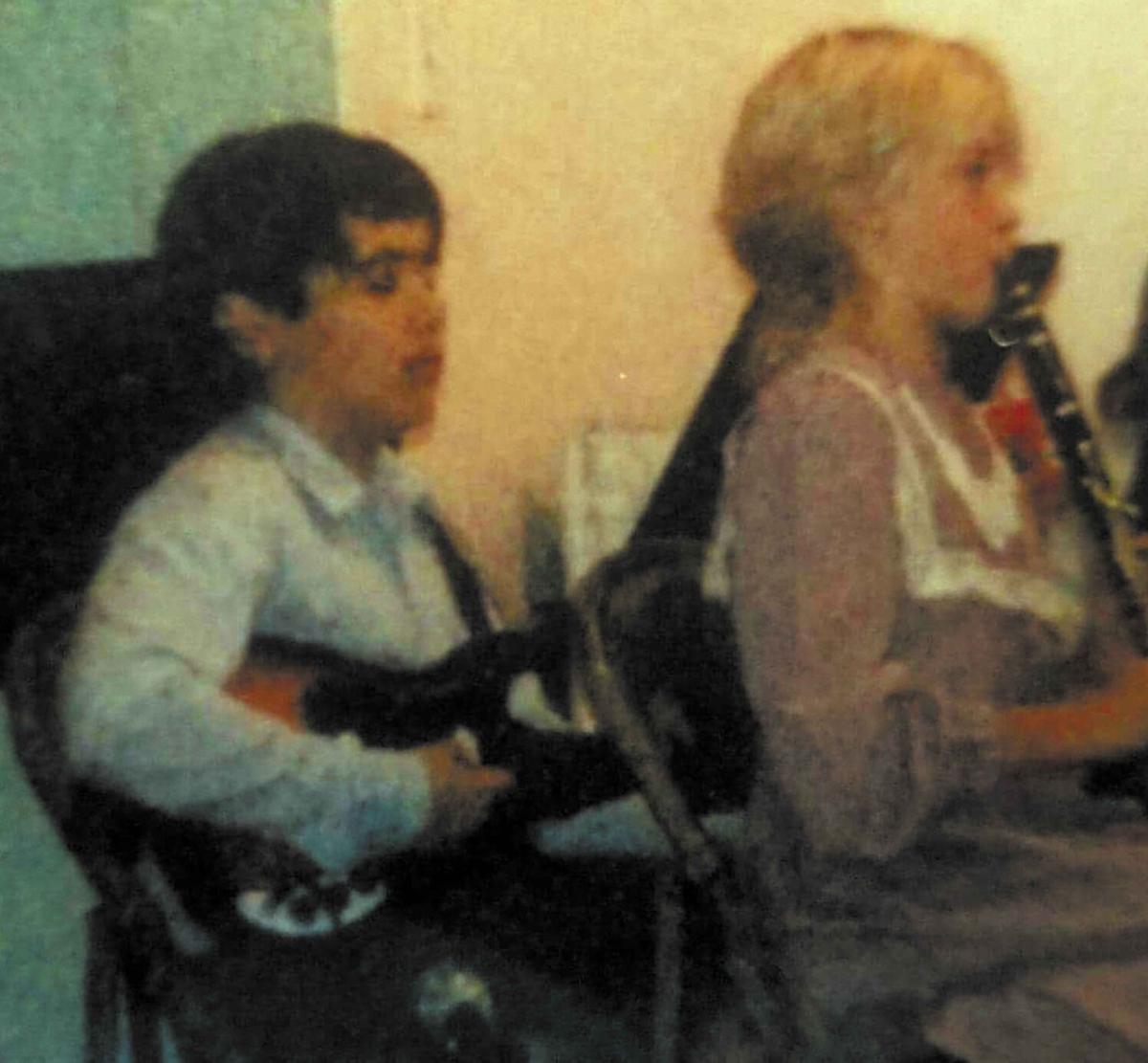 Born in Bellingham, Massachusetts, an hour outside of Boston, into a family from the French-speaking part of Quebec, Daniel Pepin has an unmistakable New England accent wed with good-natured Candian comportment. His brawny figure and tattoos may be imposing, but it is only a facade for a passionate musician who loves his craft and community.

“My grandmother had one of those old flip-top record players. The first record she had was Eight Days a Week by the Beatles,” remembers Pepin. The first time he heard it, he said, “That’s what I want to be. I want to do that.” Pepin got his first guitar lesson at age four. To encourage his musicality, Pepin’s grandmother bought him an electric guitar. His father was upset that she would spend all that money on something he may not stick with. “Which I love holding over his head now and forever,” he said affably. Music consumed Pepin. He constantly played, even strumming the tune to Super Mario Bros. or Zelda as he waited for his turn to play the game with friends.

As he grew older, he delved further into The Beatles’ catalog. Works like the Magical Mystery Tour stood out. He remembers thinking, “This is it. I don’t know what’s happening because I’m not even a teenager yet. There’s something psychedelic happening. I dig that.”

Eventually, Pepin’s father canceled his guitar lessons. “He took me out of lessons because I was teaching the teacher how to do some of the riffs,” he said. His father took him to one of New England’s most famous guitar instructors, Steven Kirby. Kirby, a Boston-based guitarist, composer, and educator, is a graduate of Berklee College and earned a degree in Jazz Composition and Arranging from the University of Massachusetts (Amherst). He has been faculty at Wellesley College, Brandeis University, and Berklee College of Music. Kirby has won awards for his jazz compositions and published articles in Guitar Player Magazine and Jazz Improv Magazine. His music has aired on radio stations worldwide, and he has toured in the U.S., Canada, Caribbean, Europe, China, and Africa. “I couldn’t out-play him. He was the top of the top,” said Pepin. Kirby encouraged Pepin to go to college for music. So, he did. Pepin enrolled at Rhode Island College to pursue a degree in Musical Education.

Even before earning his degree, Pepin taught music. His professors would vouch for his skills to play and read music. He taught at a Bellingham store called Larry B’ee Music Center, which is still open today. He taught there for years and is still in contact with the families he instructed.

Pepin also studied under Mychal Gendron, a classical guitar player, and world-touring artist. Around that time, he and friend Ron Howard started a band, The Letdown, now The Mighty Letdown. During his last year of college, The Letdown took off.

The band opened for top names at the time, like Godsmack, Cold, Breaking Benjamin, Mudvayne, and Disturbed.

“We played everything from stadiums to little tiny dive bars,” said Pepin. He toured with The Letdown until his son Ethan was born. He stopped going on the road and eventually moved to Florida to be closer to his parents. Pepin became a single father and put all of his focus on raising Ethan. With his musical flame all but extinguished, he met his now wife, Cori Blythe. Raising Ethan on his own, he described Blythe as a ‘surrogate mom’ to his son and a steadfast supporter of his music.

Pepin plays guitar, bass, drums, and piano and can chart music. He worked as an entertainment technician at an area theme park producing tunes that played in the background throughout the park and for their events. “It was great for me because I could just sit in a black room with nobody bugging me and just do my thing,” he said. In a devastating turn of events, Pepin was severely injured while weightlifting, tearing his abdomen in half. A year and a half later, the couple lost their jobs during the pandemic. “That was the cliff that I fell over to start playing again,” said Pepin.

During a trip to Europe, his wife arranged for Pepin to play the Cavern Club in Liverpool, a music mecca that hosted The Beatles during their early years. Playing where his musical paragons had played reignited Pepin’s fire, though his injury held him back.  “I was crushed for a while. I didn’t think I was ever going to play again,” Pepin said. Splitting his abdomen made it uncomfortable even to hold a guitar. He had an initial surgery that failed. “When I was in England playing the Cavern Club, I had to wear a binder that would literally hold my stomach in,” Pepin said. “I thought it was over.”

After he healed up, Blythe pushed him to play again. She bought him a classical guitar, and he booked his first show at the Winter Haven Farmers Market. “I had never played by myself,” he said. Pepin worried people might see his Spanish guitar and think, ‘How cool can that be?’

But when Pepin begins to pick the strings, it is chill-inducing – an amalgamation of years mastering his craft and an innate radiating talent. People stop what they’re doing to listen and watch Daniel Pepin. He is an entertainer to the core. His showmanship is complete with jokes, banter, and guitar tricks. He shouts out market vendors, and once shred so fast during a performance at Swan Brewing, his pick caught fire. “Once you break the ice, not to mention having a rapport with people and talking to them and being friendly… once you connect to them, it’s easy.”

“That’s why when you see me playing at the market, I’m always smiling because I can do it again, and it’s fun. Whether it’s for five people or 500, you’re going to get the same exact response,” he said.

Pepin’s ‘baby’ is a Yamaha Spanish Classical, a flamenco guitar with nylon strings. Considered one of the most romantic of instruments, its sound is dreamy and serene. “I think it does help that what I do is so different from what other people do. There’s a specific sound that that type of guitar has that you don’t get from your average guy with an acoustic guitar, steel-string,” he said. Demand for Pepin’s pretty Spanish guitar sound grew. He went from one or two shows a month to sometimes two or three in a day. Now, music is all that Pepin does. He performs gigs and does sound production and mastering for other artists.

“I play every minute that I can.” He has some 32 guitars and keeps at least one in every room of his house. He’s even been known to shred in his sleep and play along to the theme songs of movies and television shows. Blythe tunes him out at this point, he said with a smile.

He plays all over Polk County from the Winter Haven Farmers Market, and the Twisted Prop to the Pink Piano, Swan Brewing, Craft + Kitchen, Haven Coffee Roasters, and the Poor Porker. Pepin said, “The places close to home around here are really good for me. People just seem to get it.” During gigs, he plays a mix of original music and covers – Queen, The Beatles, and even Willie Nelson upon request.

You may know him as ‘the unicorn guy’ because of his galaxy-colored hair and his logo of a guitar backdropped by a unicorn designed by his wife. But that pet name has even more wholesome origins. Pepin’s son Ethan liked My Little Pony and would get picked on for it while waiting for his school bus. So, Pepin, a tattooed, weightlifting, guitar-thrashing hulk of a guy, bought a My Little Pony shirt and wore it to walk Ethan to the bus stop. After that, his bus mates never made fun of him again. “I may be a good guitar player, but I’m a way better dad.”

Producing his original music is an enthralling process. Sans band Pepin plays each instrument on a track by recording one and layering it with another from the guitar and bass to drums.

As far as lyrical inspiration is concerned, Pepin keeps it close to home, writing about personal experiences and that of friends and family. “I like soul-crushing stuff, unfortunately. I like the really sad and then inject it with hope,” he said. He called his song “Time Slips Away” “the happiest sad song you’ll ever hear in your life.” A section of the song intones, “When you’re losing your hope, I will throw down a rope. You can come back up to me.” He continued, “I like that mood that it might be melancholic, but there’s always hope in it.”

Pepin’s best friend Tom Sabin, an uncle to his son, Ethan, recently passed away. One of Pepin’s songs was played at his funeral. “That guy loved me and supported me since Letdown through all those years,” he said through tears. Pepin booked a trip to New England last month to see Sabin, who unfortunately passed before his visit. “He was my hero,” Pepin said. The two met through playing music, and Sabin had been there since day one. “I always say, ‘I don’t have a lot of friends, but I’ve got a lot of really close friends.’”

What can only be described as Serendipity’s divine hand of intervention – from a little boy who loved The Beatles to a successful musician in his own right – Daniel Pepin has joined The Beatles tribute band, Liverpool Live. Pepin is excited for the theatricality of the costumes and instruments as his part performing George Harrison. “It’s very authentic,” he said of the band. From chord strikes to minor mistakes The Beatles made, Liverpool Live plays precisely.

Pepin was introduced to Liverpool Live after meeting one of their singers, Mark Benzur, at a club. They were looking for understudies to fill in from time to time if bandmates were sick or otherwise couldn’t perform. Interested, Pepin rehearsed with them and was offered a leading position.

“And there’s no work for me because it’s The Beatles – it’s like putting on an old comfy shoe,” he said. His first performance with Liverpool Live was a June 19 gig at The Friar Tuck in Clermont.  “How ironic is it that when I was a little kid, I said ‘I’m going to do that someday,’ and now I’m literally doing that song?”

‘I love this community’

As for his musical aspirations? Now that his son is older, Pepin hopes to go back on tour. He plans to keep plugging his original music and playing at every opportunity. “While I can still do it, I’m going to give it a hundred percent.”