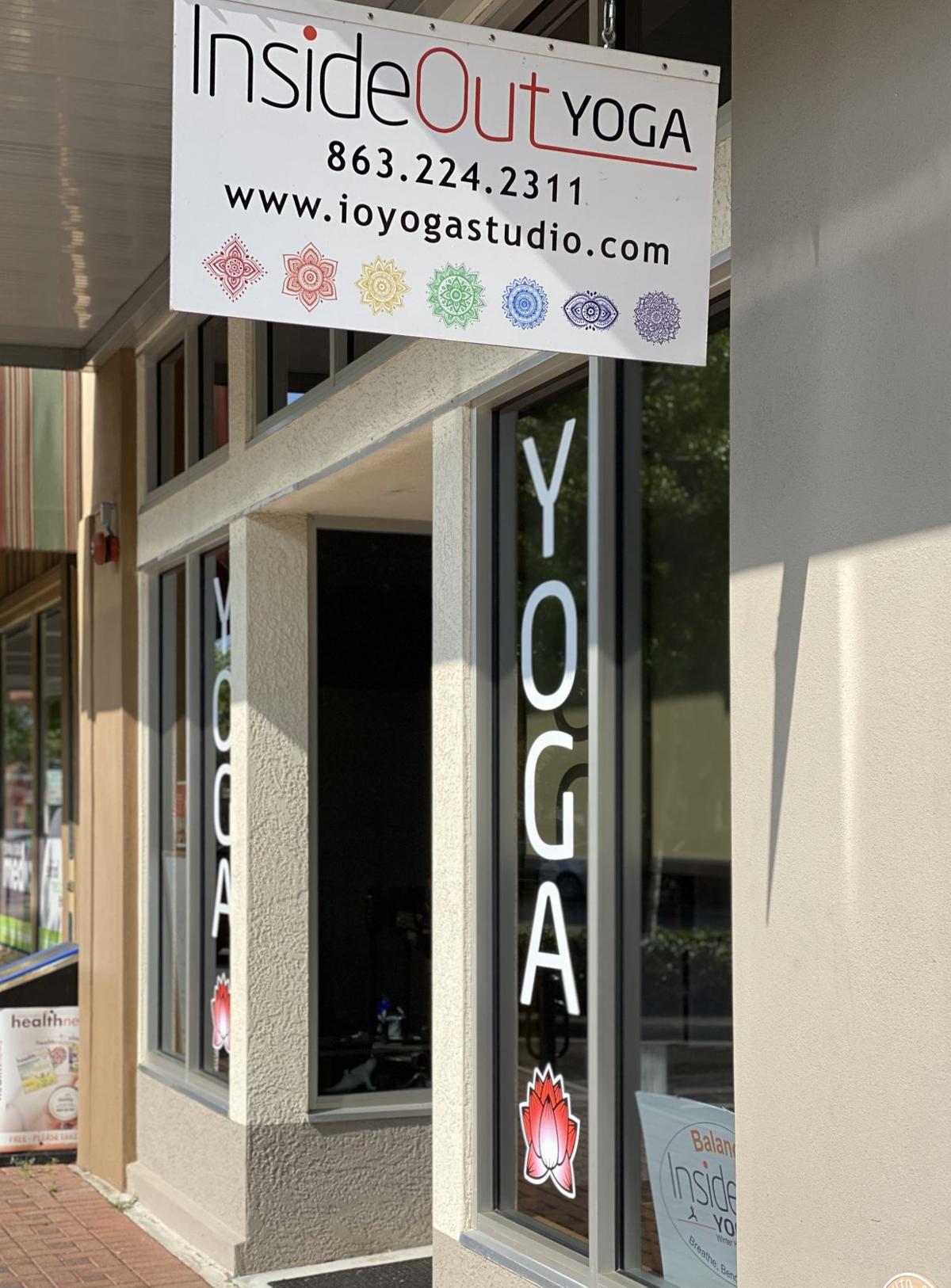 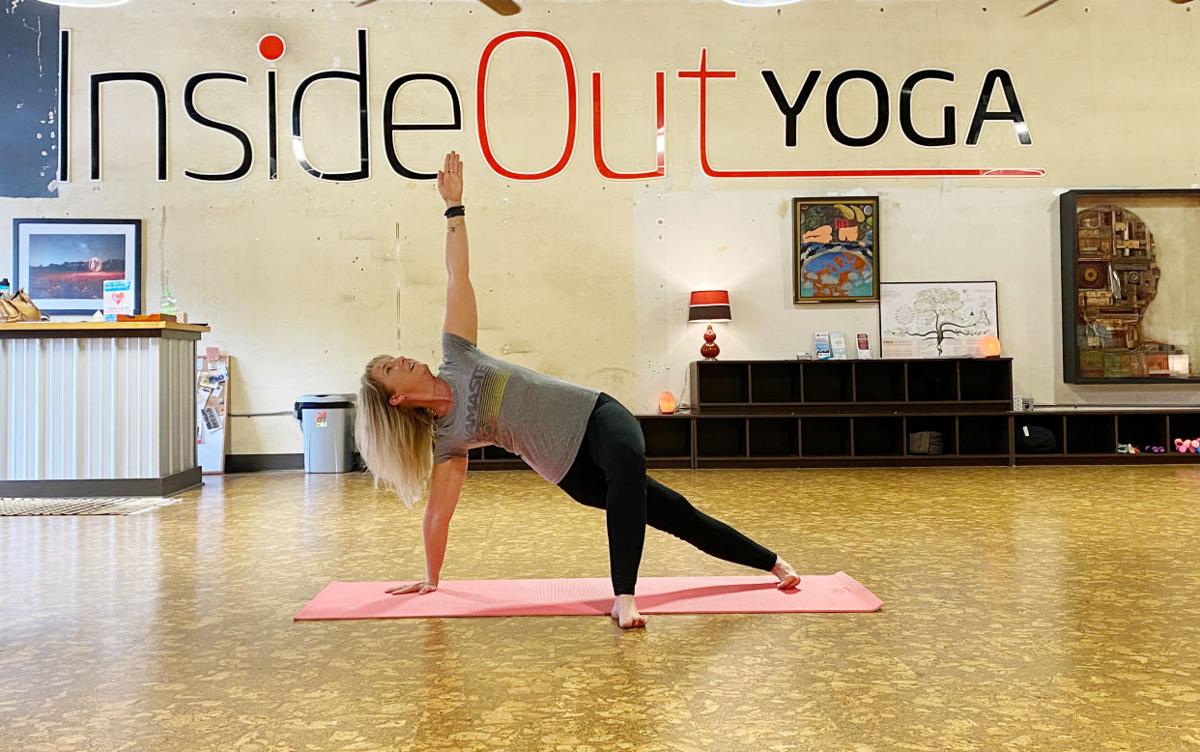 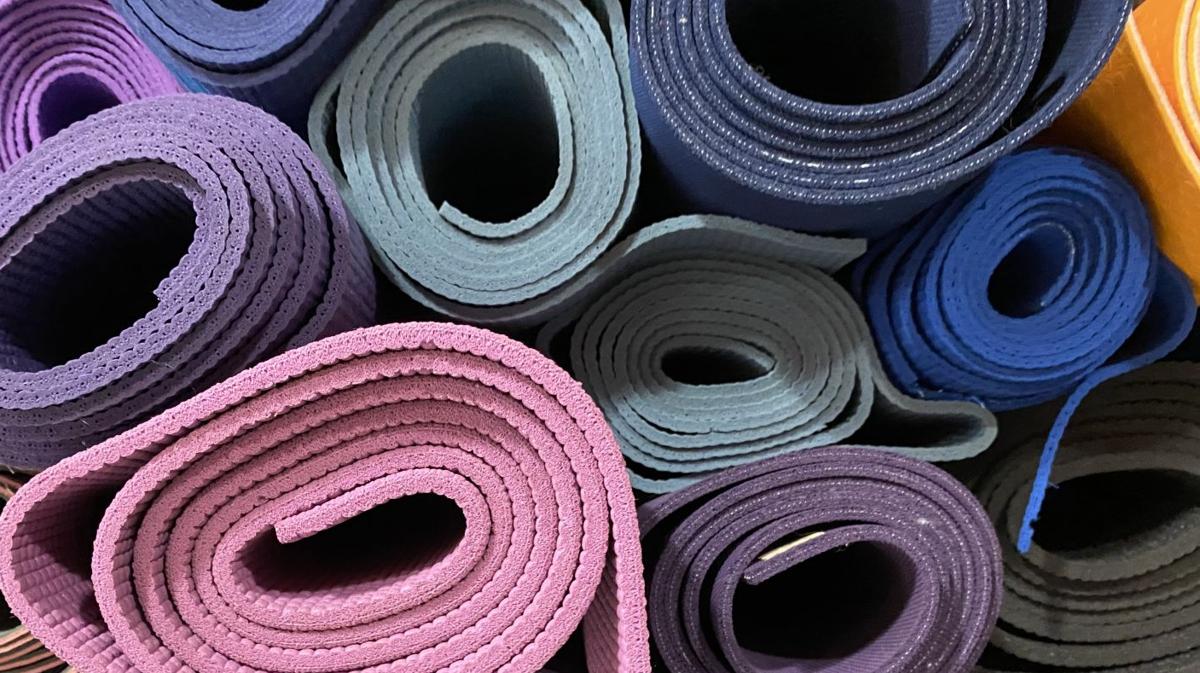 Every cool downtown needs a yoga studio, right? Kerry Wilson thinks so. Inside Out Yoga is the only yoga studio in Winter Haven, drawing area yogis to their spacious studio neighboring Central Park for nourishment – mind, body, and soul. The studio is owned by Six/Ten President and Secretary, Kerry Wilson and run by experienced and compassionate yoga instructor, Jody Reece. In addition to events, workshops, classes, lectures, and yoga teacher training, the Winter Haven yoga studio often hosts well-known teachers from top yoga institutes. Some of their popular events and classes include Basic Yoga, Flow Yoga, Kundalini, Crystal Bowl Sound Bath, and Reiki.

Reece has been practicing yoga for some twenty years. She started taking classes at the complex in town in 2000, then started practicing with Cathy Strang before deciding to become a teacher herself in 2005.

“When I was a little girl, I would see Lilias Folan on PBS wearing her awesome striped yoga britches and I was always drawn to that,” said Reece. “I worked at the Ledger at the time and in the community events they had a listing that said ‘Yoga $3 at the Complex.’”

“I almost didn’t – I almost turned around and walked out. I hadn’t done anything physical and I was by myself and almost talked myself out of it. I’m so glad I didn’t,” she said.  Reece wasn’t looking for anything other than to get out of the house. “What got my interest was that I experienced a feeling of bliss and calmness that I hadn’t experienced before. I feel like that’s why most people come back – to get that feeling.”

Kerry Wilson was born and raised here. Except for his time in college, he’s lived in Winter Haven his entire life. In junior high and high school, Wilson was the page at the Winter Haven Public Library. “I read every book in that library, I think,” he said. The topic of eastern meditation and yoga particularly piqued his interest.

He left for Duke University at 17. During his first semester there, he took a yoga class, and like Reece, grew addicted to it. When he returned from Duke, Wilson ran into a friend, David Sands, and the two started doing yoga together. “I’ve done it all my life,” he said. He and Reece met in the early aughts through Cathy Strang’s Baptiste Power Yoga classes.

Inside Out Yoga was born in 2013. One of the first buildings Six/Ten renovated as part of their project to revitalize downtown, was the B.F. Goodrich Tire Store (where The Bike Shop is today). Wilson thought it was a cool space and with no plans for it at the moment, he thought, “We’ll start a yoga studio.” They stayed there until 2017 when they moved into their current studio on Central Park. “The object is to spread the good vibe – and every cool downtown needs a yoga studio,” Wilson said.

Also spreading the good vibe with Wilson and Reece is a collective of talented, dedicated instructors. The Inside Out Yoga website includes instructor bios that are worth the read. Men and women all from different backgrounds, called to teach yoga for different reasons — working towards the same goal, one asana at a time. More yogis turned instructors are able to teach what they love thanks to the 200 hour Yoga Teacher Training (YTT) course offered by Inside Out. Reece, along with Ali Smith and Kelly Andrews, instructs the current YTT class of eleven students who give up many evenings and weekends in pursuit of teaching. The primary goal of this intensive course is “to prepare teachers to instruct safe, empowering and compassionate yoga classes based on knowledge and practical application,” according to their website.

Yoga has been described as a transformative practice, promoting concentration and strength. It’s benefits extend beyond touching your toes or learning an impressive pose. After her first class, Reece described feeling peaceful. “I was able to quiet down a little bit,” she said. Learning to quiet your mind and simply breathe can be transformative.

“If you get people to feel their own body and just be aware of it, […] even if you’re just standing up and sitting down, if you’re wholly aware of it, it’s a very transformative thing,” said Wilson. Better posture, endurance, cardiovascular health, stress relief, strength – the list goes on for mind and body advantages that can be attributed to practicing yoga. In addition to toning her body, Reece said yoga has changed the way she thinks about food. “I eat way better from being in yoga, just from being around the people that hang out in this community and overall just trying to be a better person.”

Yoga won’t promote weight loss, necessarily, but the practice often inspires a modified diet even if that doesn’t mean sticking to a strict yogic way of eating. Wilson said it was an integral reason he was a vegetarian for twenty years. “You’re much more conscious of your body. You’re more conscious of how food makes you feel after you eat it – you’re in touch with observing that,” he said.  “I try to do some form of yoga every day. [...] Once you get into it, you’re kind of doing yoga all the time. You get up and down from a chair – you’re much more aware of the muscles you’re using and how you’re doing it – you feel much more stable and you’re interested in your balance.”

Practicing concentration and taking a mental break from the fast-paced, anxious world can be favorable for one’s health. In fact, one of the eight limbs of yoga is concentration – Dharana. “If you’re on your mat and you’re doing yoga, you’ve got to concentrate on doing yoga,” said Wilson. “For a lot of people, the observance of a break and not having your mind running all the time like a crazy train out of control is the opening to calm it down a little bit and be more mindful of what you’re doing.”

Though Inside Out has avoided trends like goat yoga and hot yoga, they do bring in a myriad of styles from the mellow to the rigorous.

Reece used to teach classes like Vinyasa Flow and Yin, “I finally said, ‘I’m going to call my classes yoga. That’s what I’m going to teach – I’m going to teach yoga. I’m going to teach people to move their bodies, to breathe, and to quiet down a little bit.” Though she is focussed simply on yoga, Reece says her favorite thing to teach is Yoga Nidra or yogic sleep. “I get such beautiful feedback from people of their experience,” she said. You can find these and other classes on their Inside Out Yoga YouTube page.

Anyone who walks into one of Reece’s yoga classes at Inside Out should be able to practice what she’s teaching. She does her best to make it accessible – working with everyone from a 10-year-old boy with Tourette’s Syndrome and ADHD, to people with high blood pressure looking to get off medication, to team-building with a group of high school tennis players. Reece walked us through one of her classes. Students start the class at ‘ground and center’ which means “feel your body parts on the floor.”

“I work the class like on a bell curve. We’ll start low, and then on our hands and knees and make some movements because I want to move the spine in all six directions that are available. I also want to move all the joints,” she said. She may have students flow a bit, move through the poses, “connecting our breath with the posture.” She instructs standing poses, working back down to the floor for a cool down. “I always give modifications and I’m not teaching anything that most people couldn’t do,” Reece said.

“We give a lot of instruction in yoga,” said Reece. “You have to follow along and narrow which is one of the techniques to help a person quiet their mind – narrowing.” Breathing is a focal point during the class. “It’s a technique to quiet the mind and will allow you to be still longer,” she said. While giving breathing and physical instruction, Reece affords time to rest between poses, so her students, “can notice how they’re feeling while they’re feeling it rather than move to what’s next.”

One of the biggest obstacles for beginners seems to be flexibility. People will often say, ‘I can’t do yoga, I’m not flexible.’ Wilson responds to that sentiment, that if you were hungry, would you not eat? “I’ve been doing yoga for 50 years, but I don’t think I go any lower to touch my toes than I did 50 years ago. But if I wasn’t doing yoga, I probably couldn’t touch my knees.”

“Flexibility is something that a lot of people reach out about. They want flexibility which is a byproduct but not a necessity,” noted Reece. “The only requirement to practice yoga is that you’re breathing.” Another newcomer hurdle is the realization that “It’s only you,” said Wilson. The urge to be in competition or have the perfect form or bend over as far as the person next to you doesn’t agree with the objective of yoga. People are programmed to go as hard as they can. “Go to where you can, and maybe go a little further. Breathe into these things, but take it easy,” advised Wilson.

YT: Inside Out Yoga