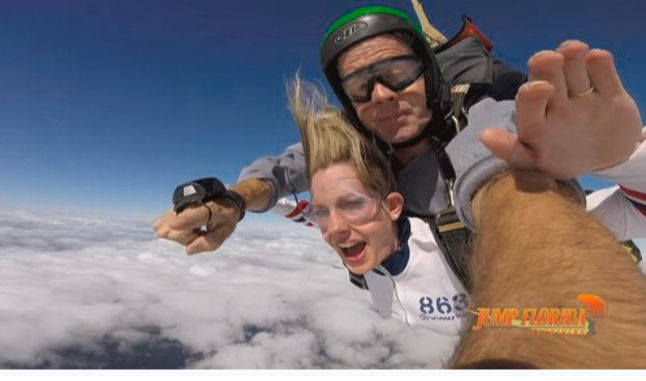 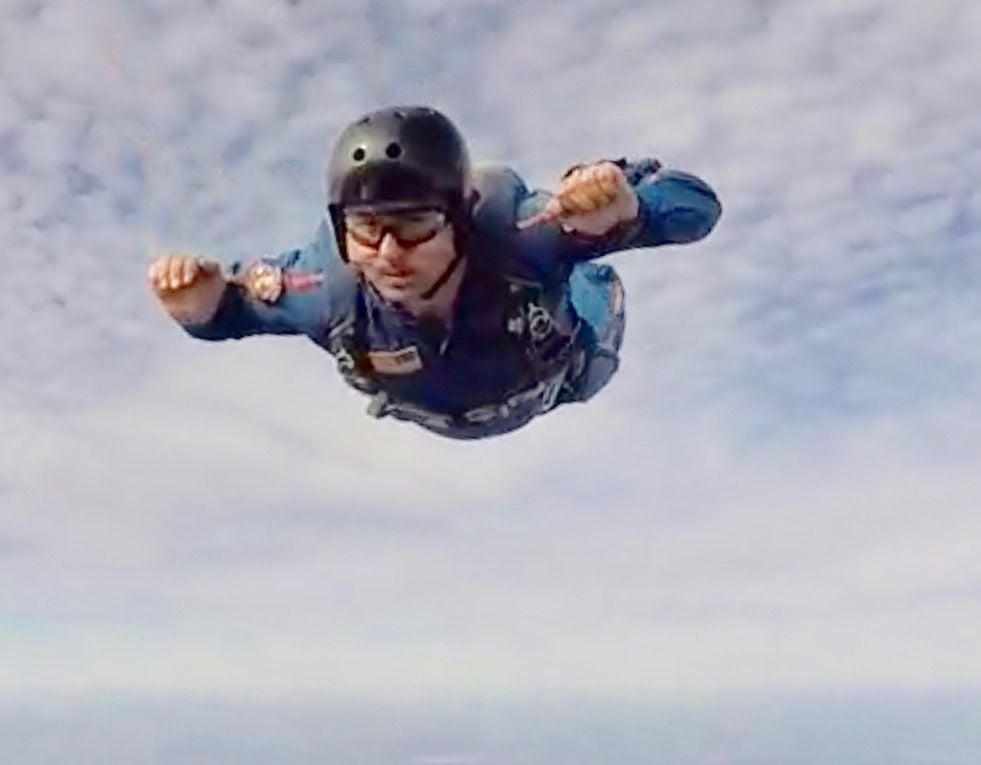 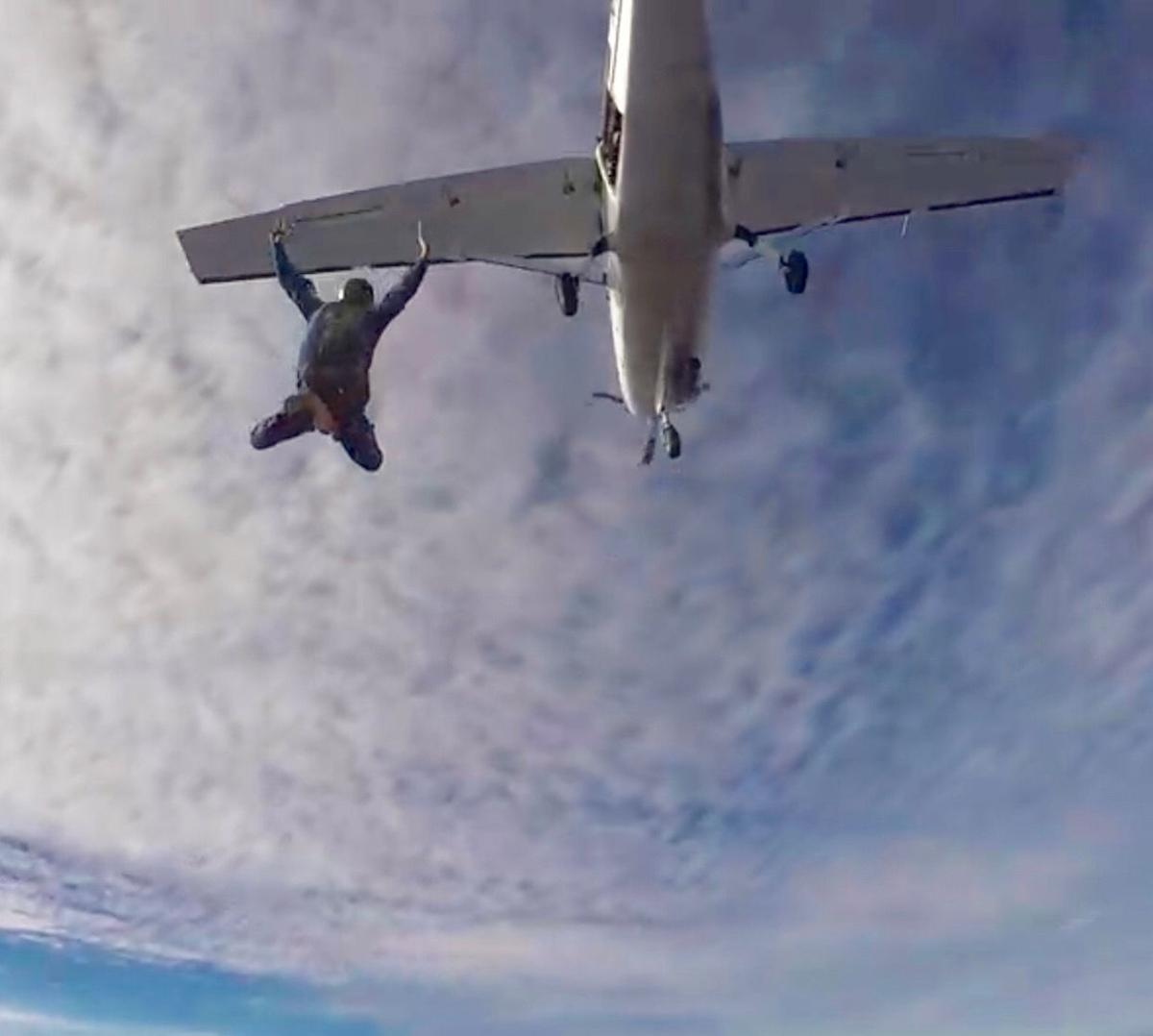 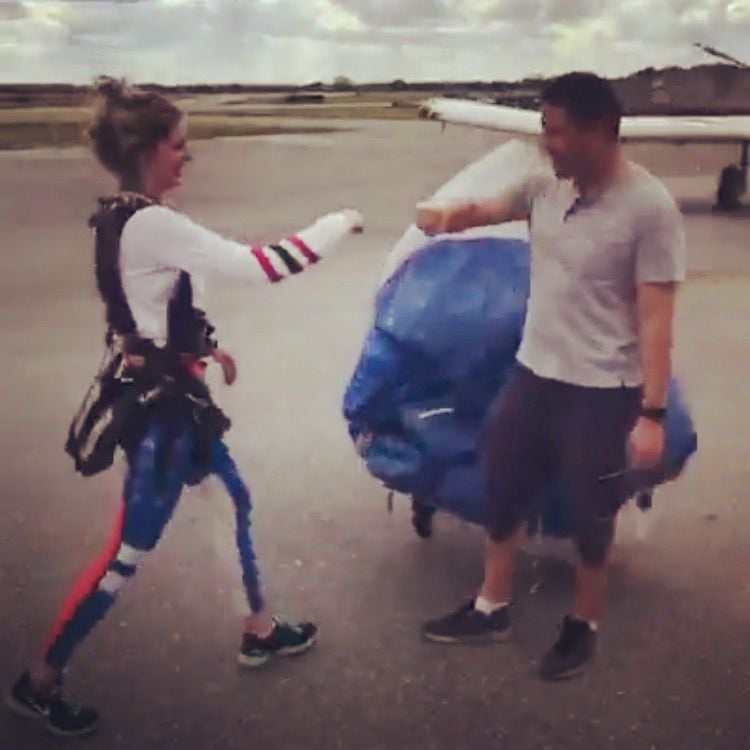 I would have never guessed when I woke up this morning that I would:

B) With anyone besides my husband.

The phone call from the Canadian went like this, “Hey Nando, it’s Jordy.  Frenchie and I thought we would kidnap Sally to come watch him skydive in Lake Wales and then go do a little thrifting. As it turns out... you should probably get over here to Florida Skydiving Center. Sebastien has talked your wife into jumping with him!”

Now, Nando is used to these two characters getting me into situations but this was a little much for him.  He, like other skeptics said, “Jordy, why would Sally ever want to jump out of a perfectly good airplane?  She’s got more sense than that.”

While the Frenchman danced around getting ready to put on his harness and ascend for the eighth solo jump of his life, the wind picked up. Betty, who runs the place and has owned skydiving centers since the 1970’s said, “Sebastien, no matter how qualified you think you are, with these winds, you can’t jump today. Make an appointment and come back tomorrow.”  I was wearing cowboy boots anyway, which isn’t the preferred shoe for skydiving.  We were off the hook, but I was intrigued by something I had never even thought about or considered.

When we got home I said, “Nando, do you want to do a tandem jump with me tomorrow?”  “No way!” He said, and the look on his face made us laugh.  “Are you sure Nando?” I said. “100 percent! I think you all are crazy. I really don’t want you to do it either Sally. Sebastien and Jordy, it’s one thing to take my wife thrifting and out to lunch, but you can’t just take her jumping out of airplanes.  She is not joining your international flight crew.”

The next morning, Jordy had an actual flight back to Canada so, Nando and I headed back to Lake Wales with Sebastien. (He refused to make an appointment.) He thought he’d just show up in his posh flight suit being French and they’d let him on the next flight.

As hard as he tried to sweet talk Betty and after sitting there for 4 hours we realized once again there would be no skydiving without an appointment. Whether I jumped or not, I had decided I would write my article about skydiving.

Betty instructed Sebastien, “Monday, you and your crew can go to our other facility in Plant City and meet Pip at 10 am.  He will jump with you.  Sally, you think about it and if you want to do it, come back next weekend.  We will video you skydiving so you have a picture of you doing it for your article.”

Plant City had a completely different vibe than the Olympic feel of Lake Wales. It was more like a cool campground. The Cessna 900 was being washed and serviced on the grass in front of the picnic tables. People were sitting around talking of the days jump. Parachutes were hanging from the ceiling, a big TV was there to watch your footage from the jump and it seemed to me this place was more Sebastien’s crowd. People come from all over the world and stay here just to skydive. They start in the morning and jump over and over again perfecting their free fall and canopy skills, gaining confidence and of course landing and folding the parachute properly. That is something that comes after everyone’s first jump, which most of the time is tandem with an instructor like Pip. He has over 20,000 jumps.

I was pretty sure that on Saturday I was going jump. I couldn’t talk about it too much or I would get nervous and start telling myself I wasn’t.  Look guys, I’m a Costume Designer.  I dress actors and design T-shirts… I do Zumba and ride a pony horse.  I am not a daredevil on any scale.

Saturday morning, I called and made an appointment with Betty. At noon I was going to jump or cancel at the last minute.  Either way… Nando, my love, was more nervous than I and all he was going to be doing was standing on the ground watching with Sebastien. They would possibly “go live” on Instagram if I could teach them how to use it on the way there.

I put on my cutest… what I considered to look like a skydiving outfit, waterproof mascara, grabbed my sparkly Yeti Cup and pushed myself to get in the car.  I thought, oh man… if I’m this nervous just getting in the car to go there how am I going to get myself to climb on a plane and then jump out of it?

I’ll tell you how.  I signed my waver, got secured into a harness and Pip had a Go Pro camera on his wrist. Pip began filming… got me all hyped up saying things like, let’s go skydiving Sally…held my hand and escorted me through a whiff of jet fuel to the plane. The pilot took off in a blink of an eye,  and we were flying.  I was sweaty-palmed holding on to what I was calling in my head the “Oh sh**! bar” trying to suppress my mile a minute heart beat so I could enjoy the one-way flight. I would not be on the plane going back down.

The plane kept climbing higher and I was thinking, Isn’t that high enough? I think we would be fine to jump from here.   But no, we kept escalating.   In the cabin, there was not much talking other than preoperational conversation between the other tandem couple and the 2 Sebastien types that were going to be jumping solo.

Next thing I knew…. harnesses were getting hooked up. Altimeters were being double checked… straps were being snugly pulled.  Pip put goggles on me like the jockeys wear for horse racing. He prepped me on a few last minute positions, filmed a second where you can visibly tell I am freaking out, but trying to look cute and act cool.

Then the high fives started.  Sebastien told me that everyone starts high fiving right before they jump. Lights turned green and first two headed out the side door.  I felt like we were soldiers about to be dropped for a mission.

Off they went and then the other tandem group jumped. Being the last ones, we slid down the leather bench to the “Exit.”  My feet were dangling out of the plane which was moving at 120 mph. I kept saying in my head, if President George Bush did it at 90, I can do it.

Then we fell out of the plane.  It was kind of like diving into water, you go in and it takes a minute to actually adjust.  Well, in my case, breathe because I was in shock and forgot to keep my head up like Sebastien and Pip had told me a hundred times.  What was probably seconds of free falling and trying to believe what I was actually doing, felt like minutes then all of a sudden…a rush of clarity, peace and quiet.  Pip, with his British accent had gone from yelling so I could hear him, to speaking normally.  He said, “That’s it! What do you think Sally?”  “Did the parachute open?” I asked?  “Of course it did! Look up at the canopy.”  I took a huge breath and remembered being told, when you’re relaxed you notice more.

I began looking for our Lake Wales cattle farm amongst the array of green orange groves and brown patchwork of earth below us.  Our feet were just hanging there; Pip was singing Baa Baa Black Sheep as we drifted over a sheep farm. We talked about things like how Nando and I met and ended up in Polk County. Now I was a real “snowbird.”  We were frozen in time just floating carefree visiting and viewing from above things that I had seen a million times but never like this.  I was overcome with relief and awe as well as surprise when we landed perfectly on our bums like the feather in “Forrest Gump.”

I guess I didn’t even realize he was filming. I was in such a dream and when we landed it was like I woke up. I hugged and kissed Pip as he gathered up the canopy and we proudly marched towards Nando and Sebastien. Me wearing a smile that probably blinded them as much as the sun.

Nando hugged me. He was so happy to have me back. Sebastien high fived me and called me an “Unidentified Flying Sally” and then said, “Now you know. I told you that you would like it.”

I kind of just kept following Pip to drop off the parachute to be repacked. I felt like I was his wingman.  I was in a way, loopy.  Hmmm… a natural high? Or “On Cloud Nine?” Pip had said to me, “Whatever happens in the sky stays in the sky!” I loved that.   He was a pleasure and made sure I was safe.

I readjusted and managed to walk over to Betty to let her know that I had survived.  She, who has only gone skydiving once in her life, wasn’t surprised but smiled and said, “Great, now you’ve done it!”

My amateur “Instagram live filmers” managed to kill the feed during my 5 star landing, but they had a champagne picnic planned on the farm to celebrate.  I crossed something off of my bucket list that hadn’t even been on it in the first place, but should have been.

It was a perfect dream day… filled with every emotion on the spectrum.  I will say that like Betty, I don’t know if I need to do it again but… I think everyone should do it at least once.  Or be like Cowboy Nando and have your wife do it so you can vicariously experience it and brag about her to all your friends.

From Our International Flight Crew...

Special Thanks to Jump Florida Skydiving, which in my video I call by 10 different names. I was so flustered, lol.

P.S. I had thought of going into details and all the steps leading up to the jump but…. In the words of Sebastien, you’ll see.

Even if you’re not

No one can tell the difference

“Once you hear the name Sharkey you don’t hardly forget it,” said Sharkey Baz (named after A…

Ninety-three-year-old Maria Anaya has much to show for her near-century on Earth. She has el…