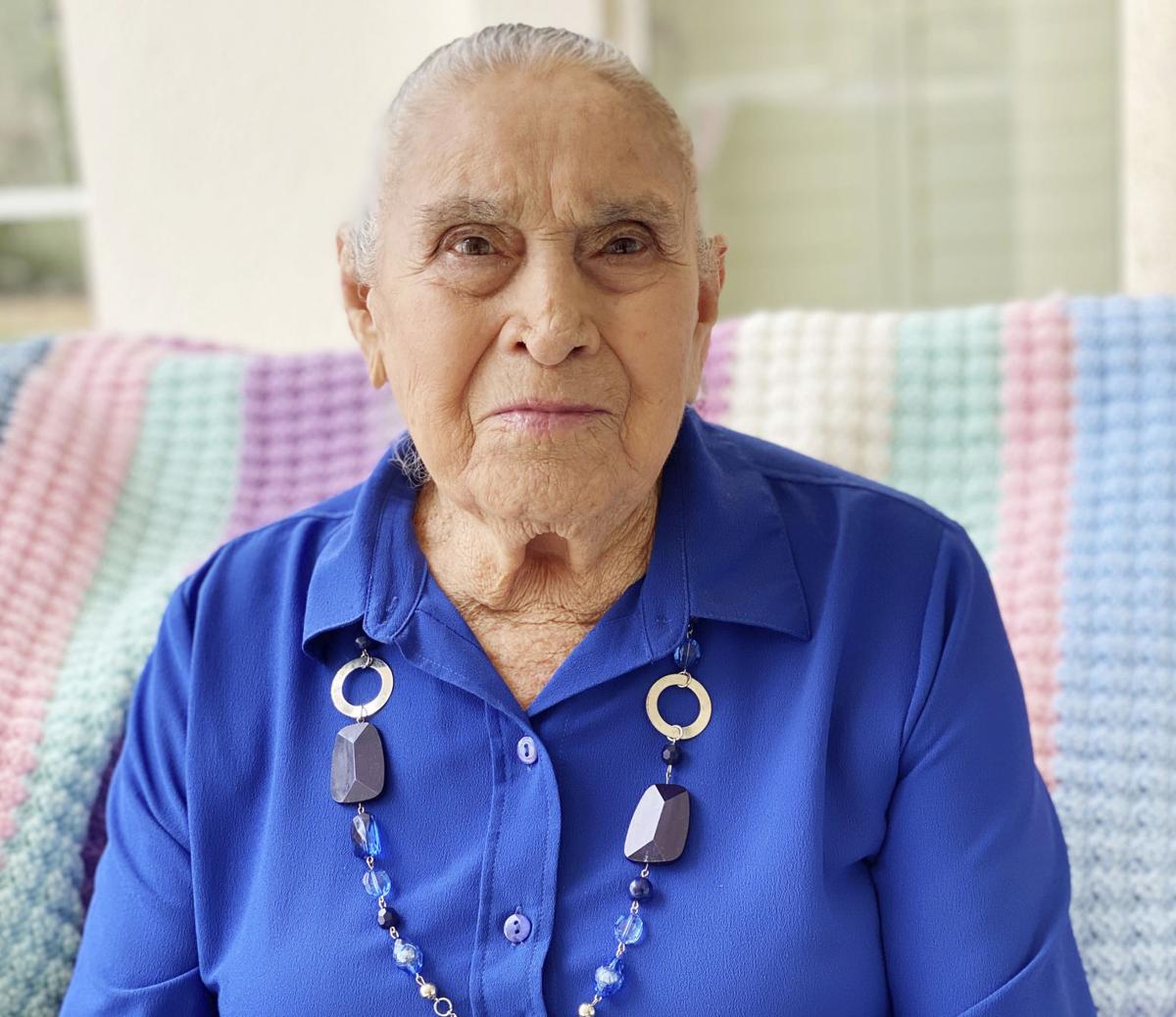 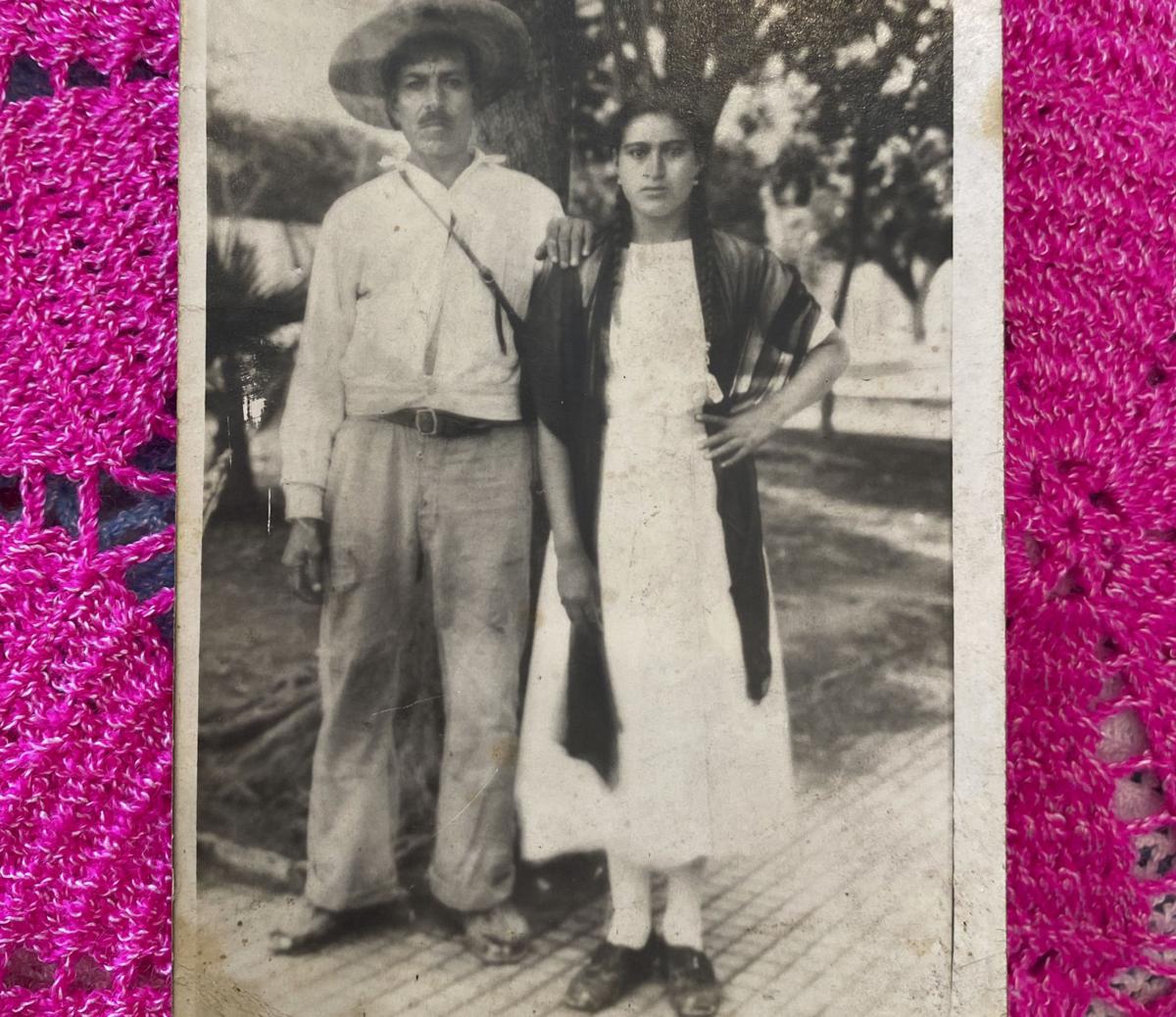 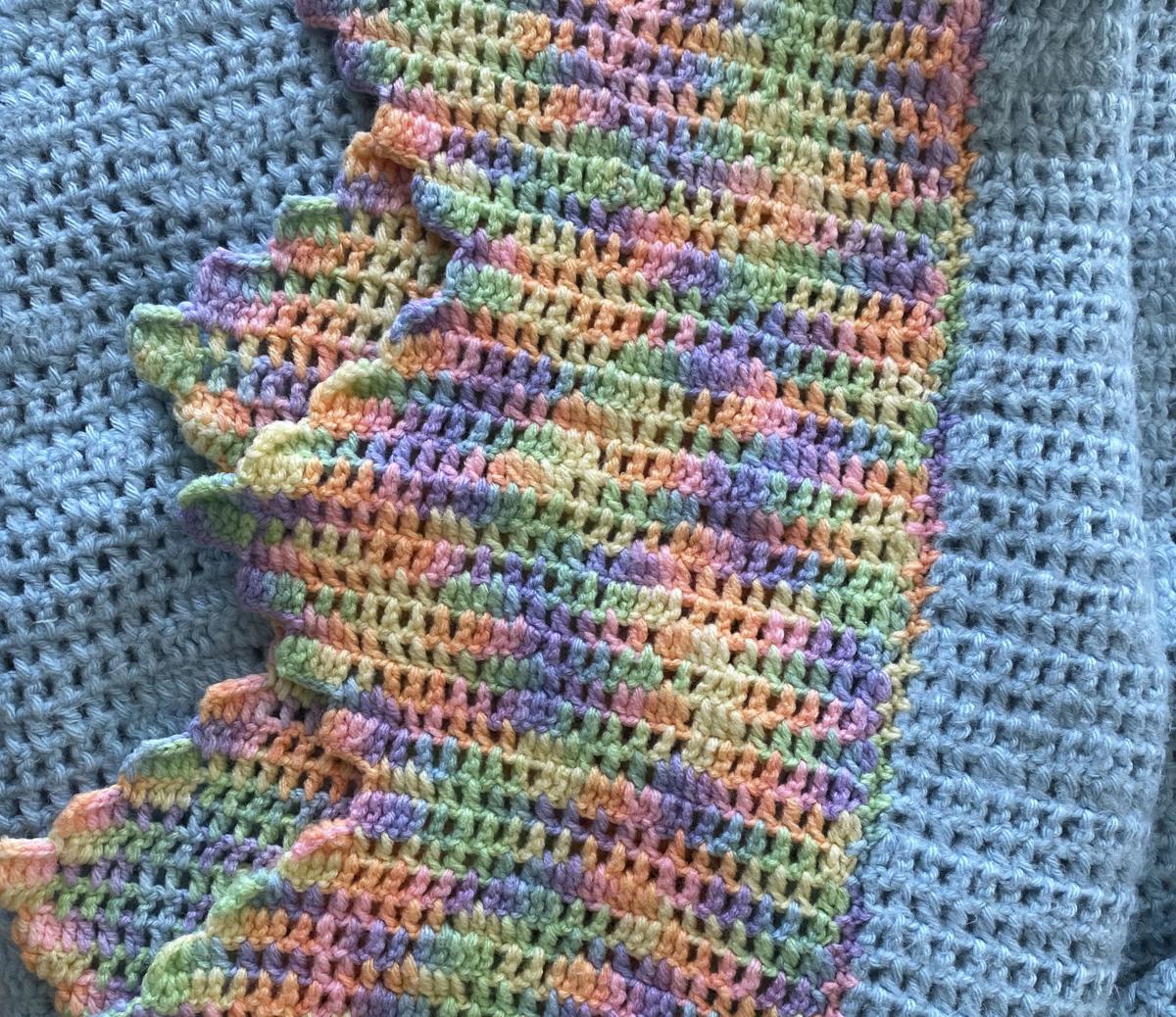 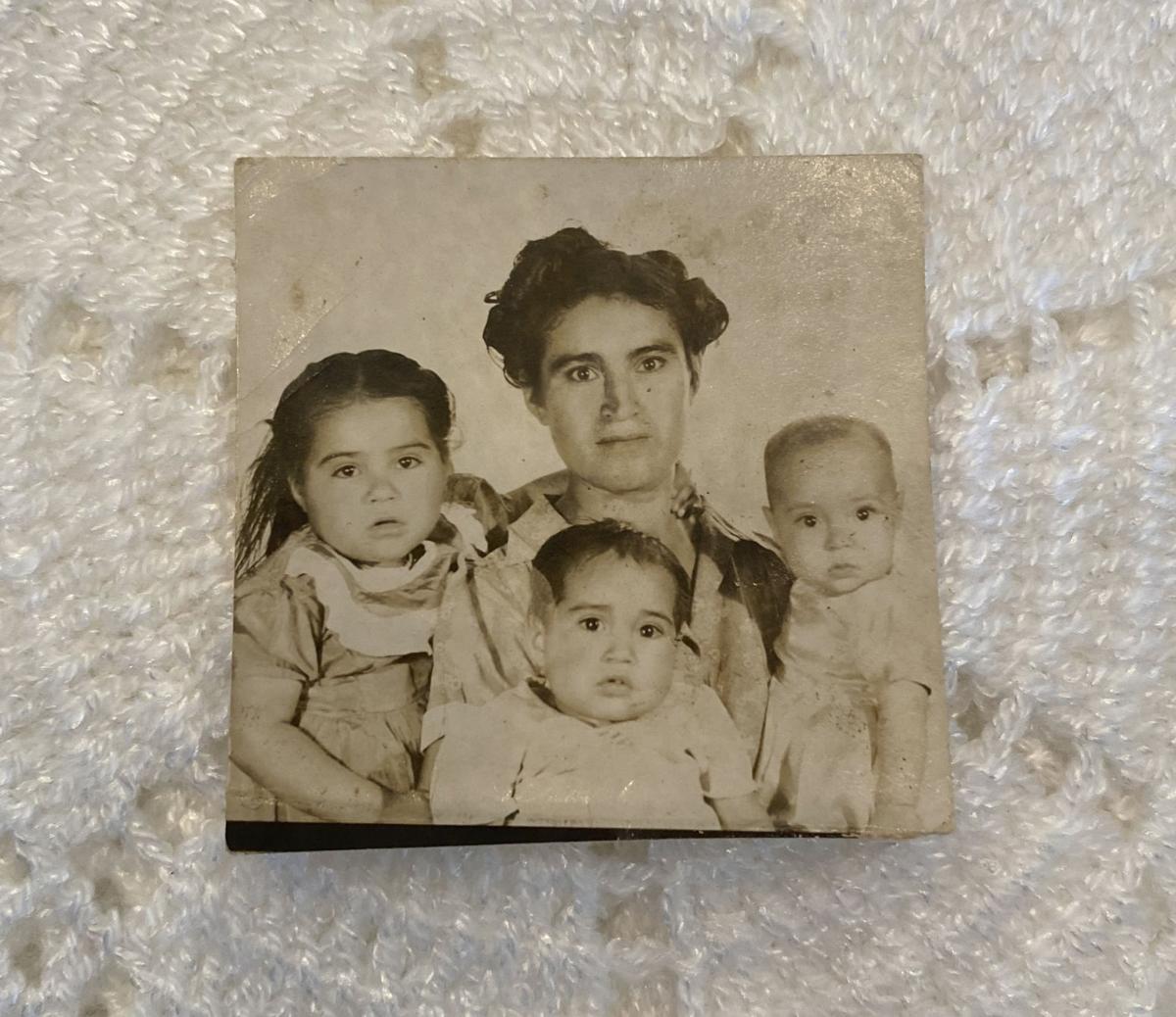 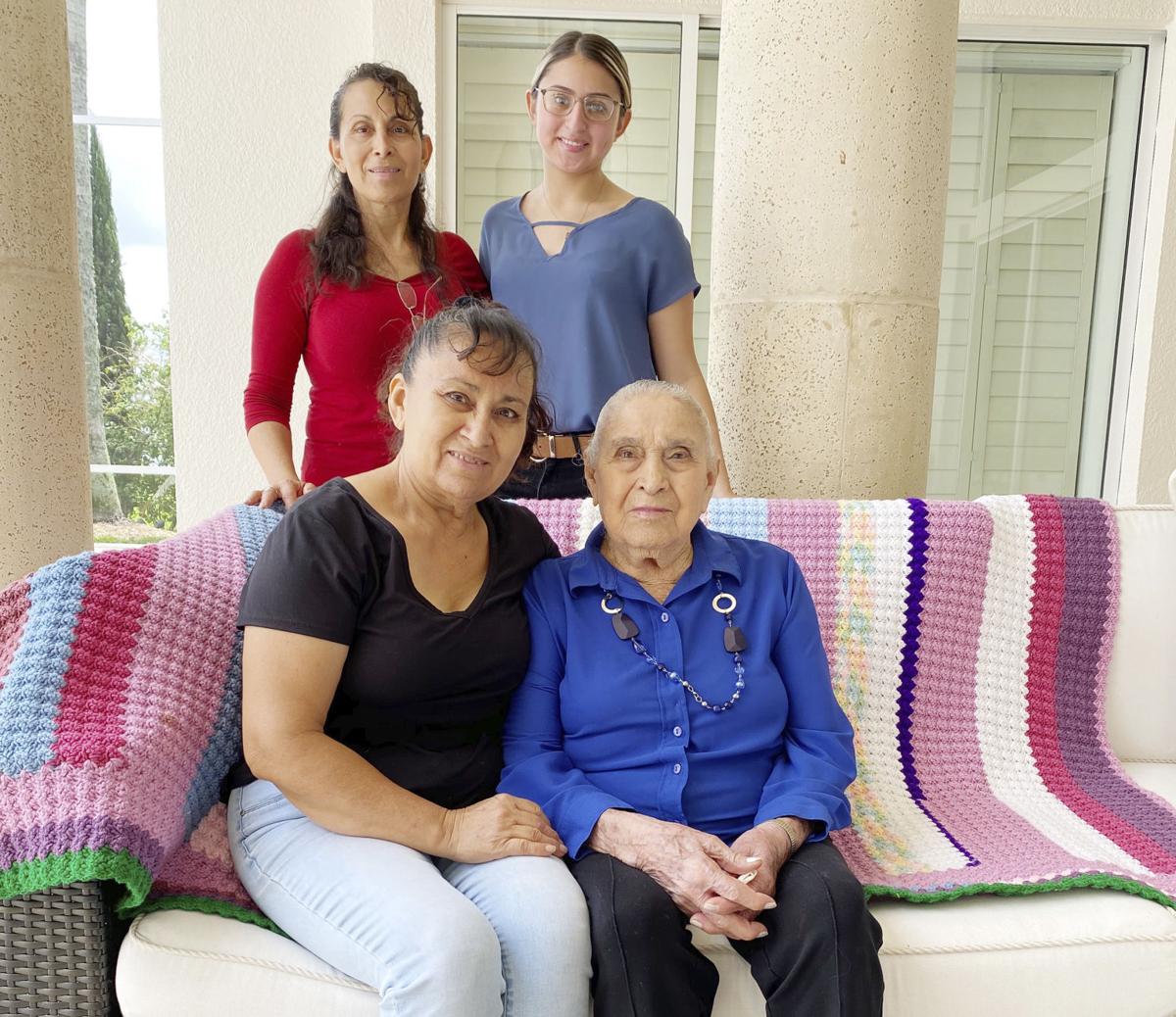 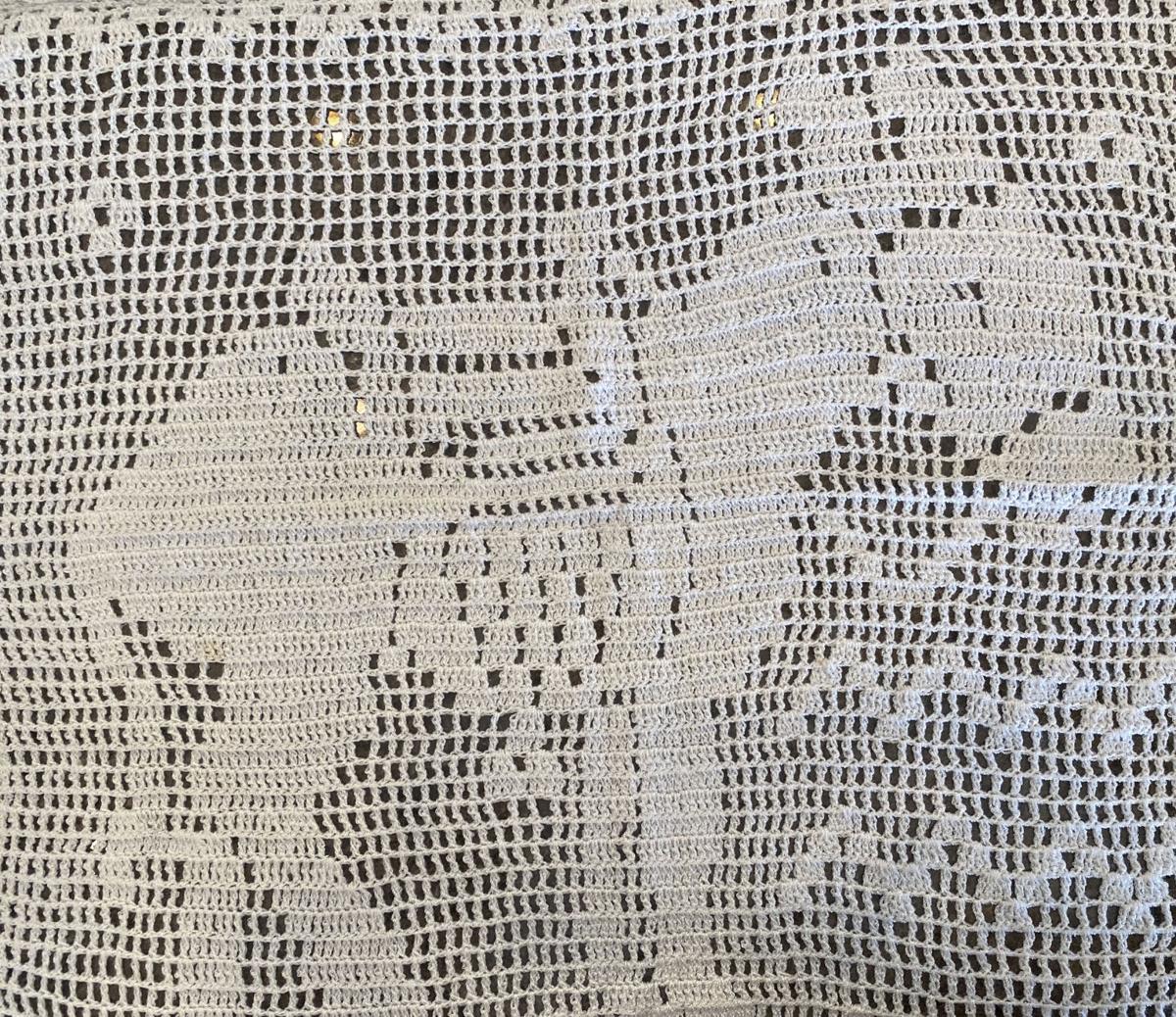 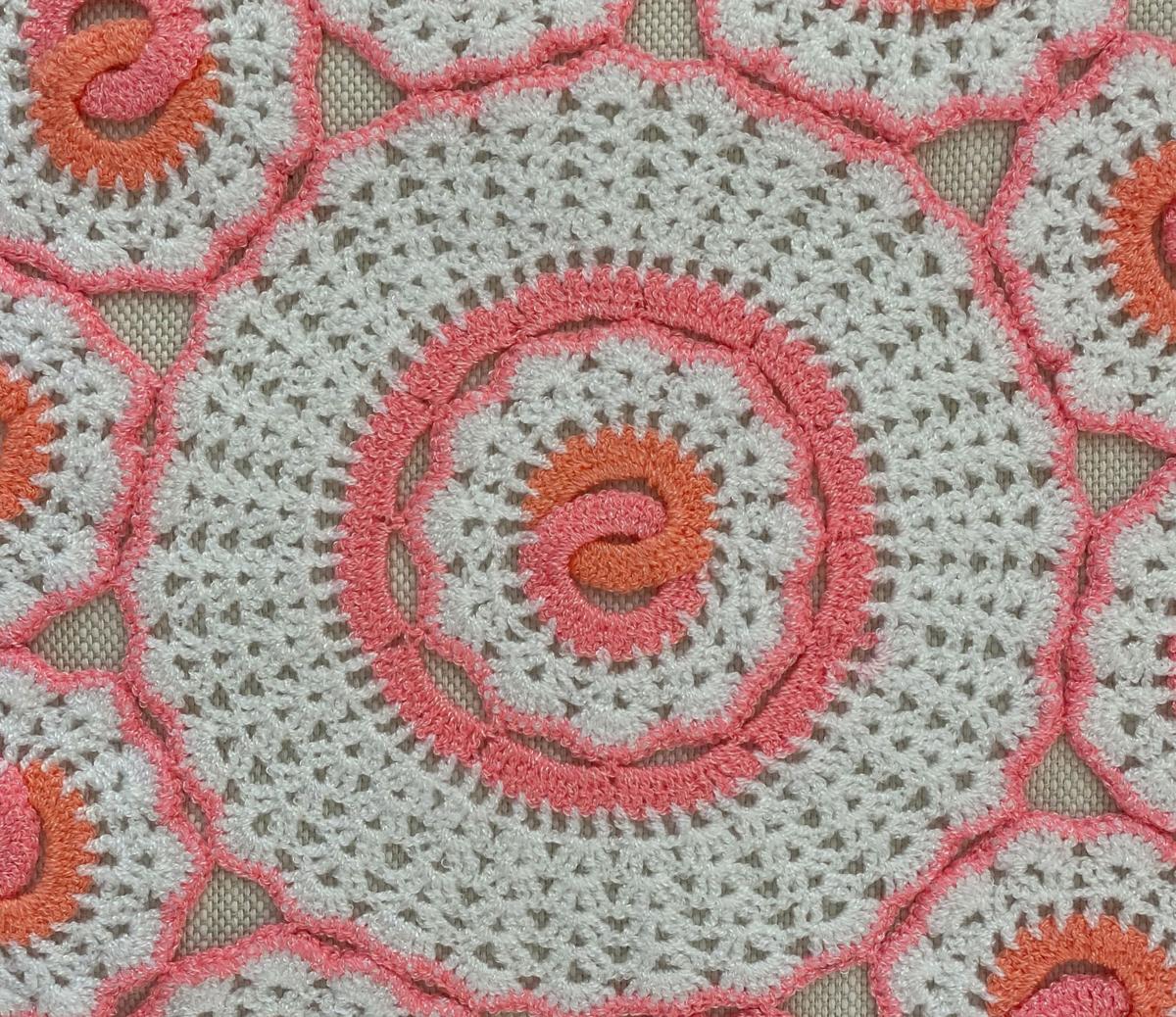 Ninety-three-year-old Maria Anaya has much to show for her near-century on Earth. She has eleven children, 39 grandchildren, and thousands of pieces of hand-crocheted artwork.  We sat around a table with Maria, her daughters Connie and Alice Anaya, and her granddaughter, 21-year-old Kimberly Padilla surrounded by colorful crochets that were once only spools of yarn until Maria set her hands and mind to them.

The family pulled out a small book with aging photographs telling Maria’s life story flipping through images – Maria and her father some 70 years ago, her mother, mother-in-law, and photos of her and her own small children, around 1950, she estimated.

Born in Guanajuato, Mexico in 1927, Maria had two brothers and two sisters. Her earlier years were marked by violent ripples following the Cristero War. She remembers hiding with her family in a cave for some three months to escape violence in her town. She remembers fear at the sound of horses galloping near their rocky hideaway, with smaller siblings unaware of the importance of their silence. “They had a little flashlight for when they needed to change diapers or give food to the little ones,” said Connie, relaying her mother’s memories of the rough conditions.

Another memory relayed is Maria, age 13. She began watching her cousins crochet and taught herself the craft. “She used to look at things that her cousins would make and try to copy what they were doing because she liked how theirs would turn out,” Kimberly said. “She thought the crochet work was pretty so she wanted to make stuff herself.”

First, the border for a skirt, progressing to more detailed pieces like tablecloths, doilies, blankets, and tiny dresses to hang as wall decorations. What products of her labor she didn’t keep, she would give away as gifts to friends and relatives. She would sew her children’s clothes growing up and make them stuffed animals and flowers from a patchwork of fabric. Her many children and grandchildren have baby blankets, sweaters, and stuffed animals from Maria.

As she grew up and had a family of her own, Maria spent time raising her children and doing agricultural labor. She picked cotton and worked for a company making bricks. She would travel to Texas and eventually Florida for seasonal jobs before settling with her grown children in Florida in the 1980s, obtaining her citizenship three years ago. She has continued crochet as a hobby throughout her years.

Connie and Alice learned from their mother how to crochet, though admittedly not to the same gifted standards. Asked if she has passed this craft down to anyone else, Kimberly answered with a small laugh, “She tried to teach me once, but I didn’t grasp it.” Some pieces are monocolored, spare with an ornate pattern. Others are brilliant and vivid with embroidery, depicting crosses, cats, rabbits, donkeys, birds, or flowers. Her favorite material to use is a yarn with shimmery flecks throughout it.

Amid the baby blankets and sweaters, Maria passed down other things. Though Kimberly didn’t grasp the crochet craft, she has learned to cook from her grandmother. Daughter Connie said, “I think one of the best things we learned from her is work, to respect everybody, and to keep going.”

Whether she’s working on something small that may take her two days to complete or a more elaborate project like the grand white tablecloth used for her grandson’s wedding, taking her six months to finish – her process is the same. No pattern, no written plan, just counting. Crocheting has become such second nature to her that she can hold conversations as she counts. Kimberly explained, “To make her pattern – it’s kind of like the math is in her head – she knows just how many spaces to count and when she has to make certain stitches for her patterns to come out the right way.”

Lynn Oakley has known the Anaya family for 18 years. “She had some health problems and we all agreed we didn’t want to leave her at home alone,” said Oakley of Maria. “So, she came here.” Every day for two years save for the weekends, Maria sits moving her crochet hook with well-practiced hands. “I don’t know how she does it without direction,” said Oakley. “I got to really studying this over the years – how magnificent this is.”

Oakley said she is always amazed to see her do such intricate pieces without a plan or guideline. “This is too important for you not to be noticed,” said Oakley. “… because no one does this anymore.”

It is important. Whether Maria is aware of just how remarkable the magic she makes is, it is unclear, but that’s okay. It is a quiet skill, a solitary happiness. She has the kind of humble creativity that needs not announce itself or boast. It’s presence and product say all that needs to be said – Here is artwork from the beautiful mind of Maria Anaya.