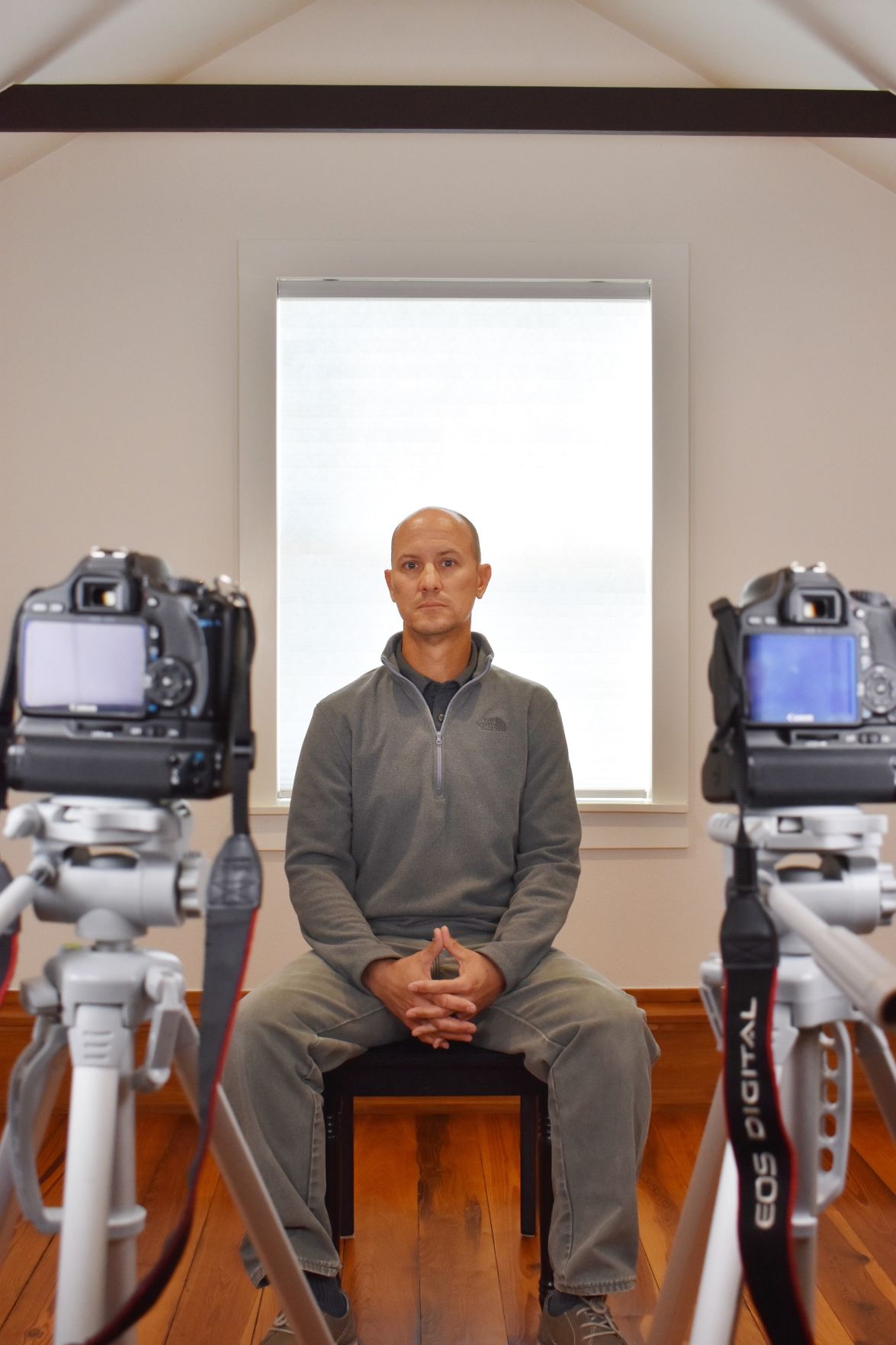 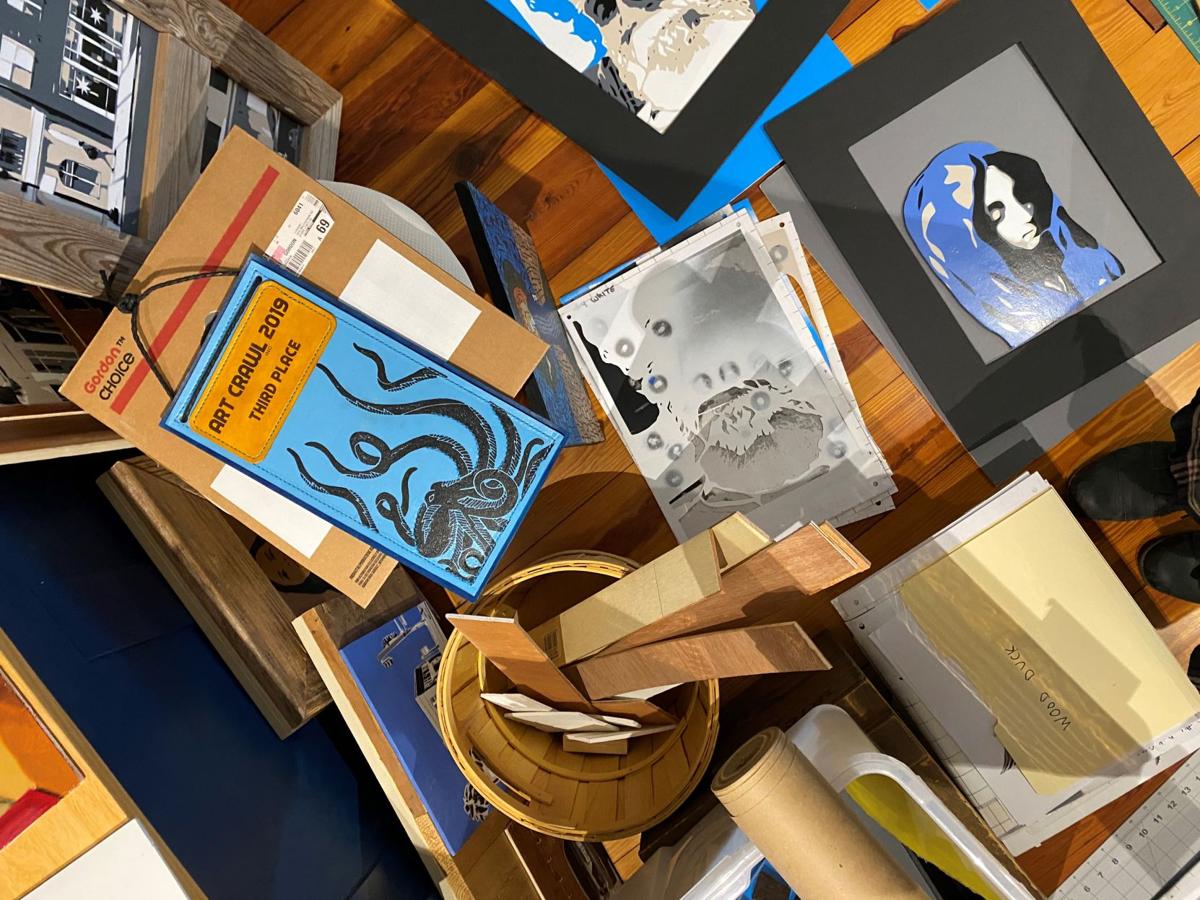 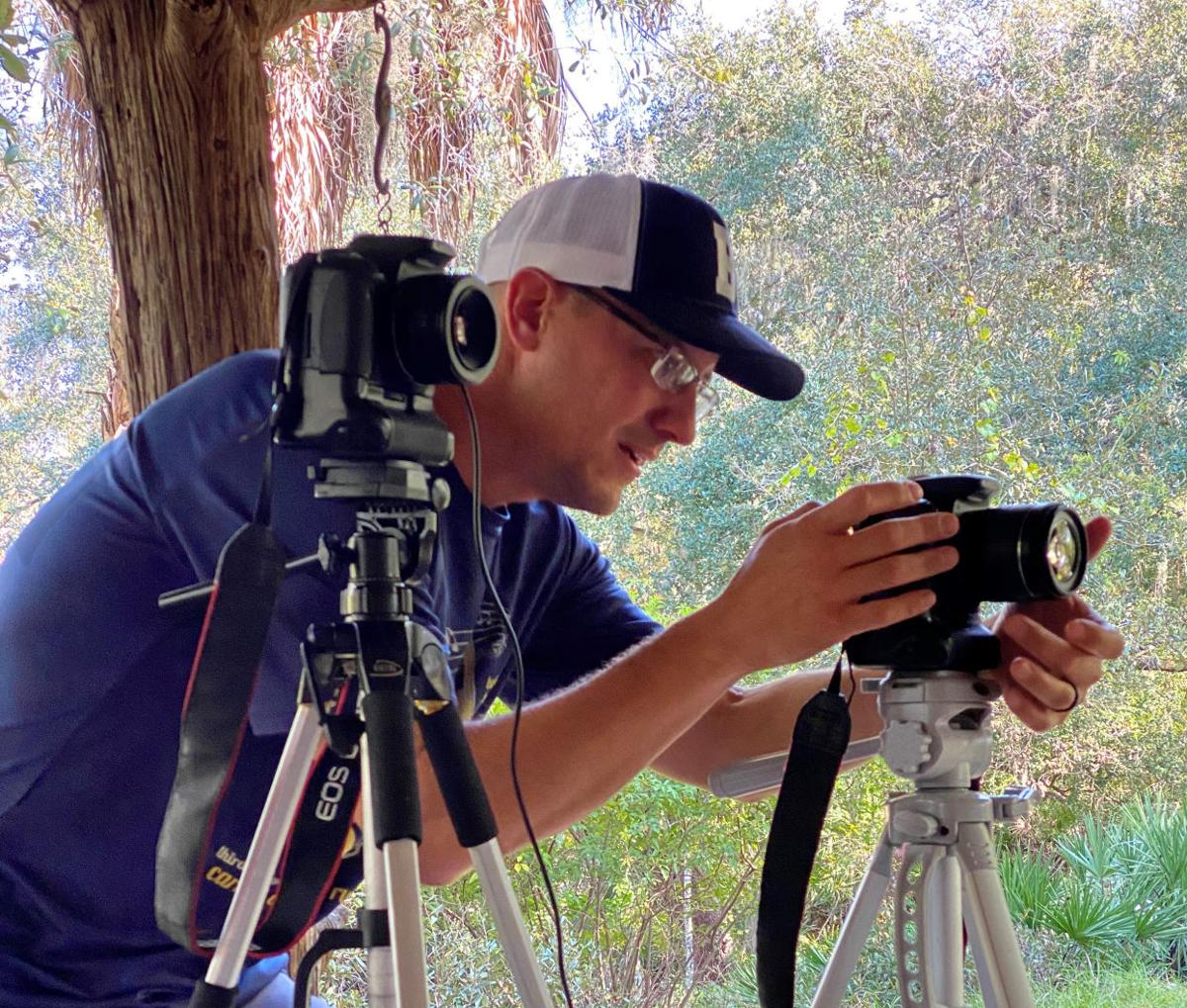 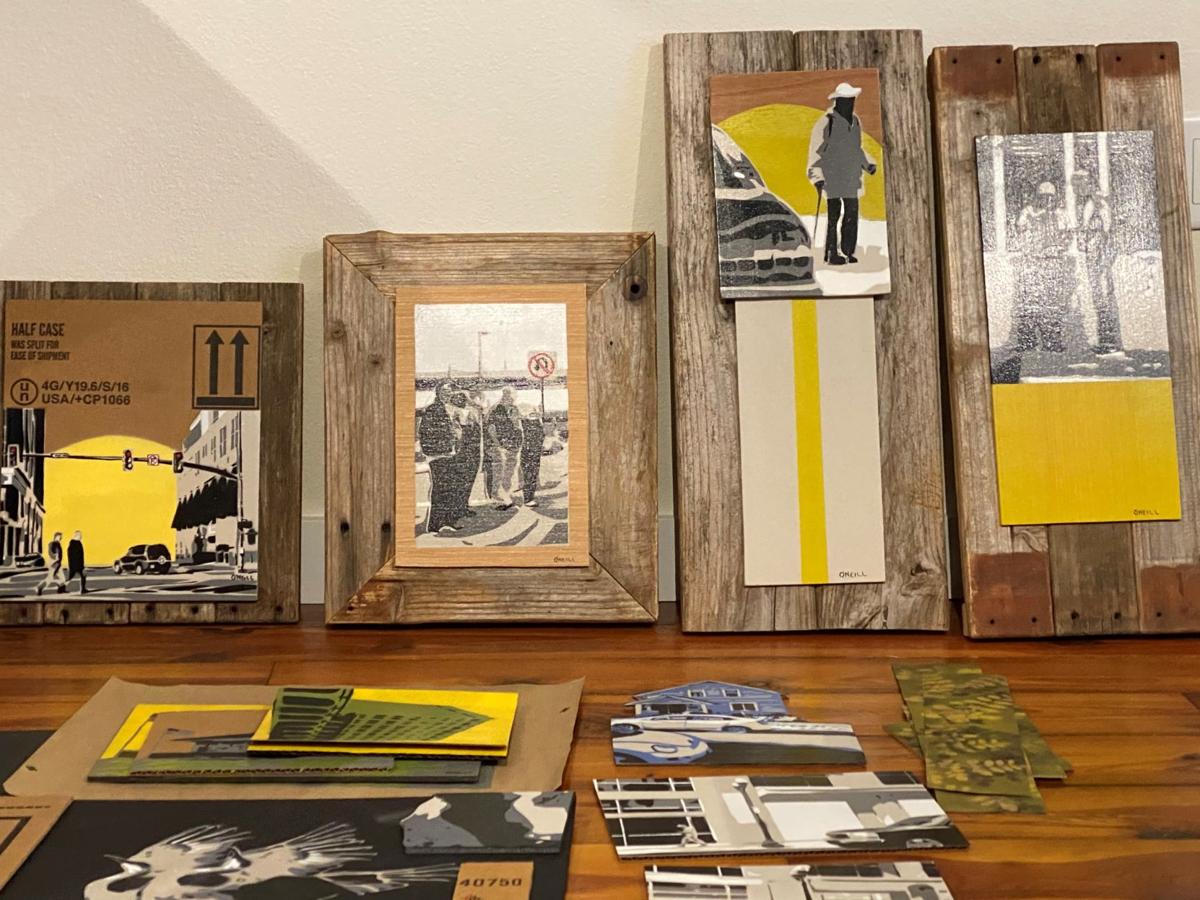 “I’m not trying to find something that makes me happy – I’m trying to find something with meaning,” said Lake Wales artist and filmmaker, Paul O’Neill. Though filmmaking is certainly something that brings him joy, the meaning he finds in forming a connection with an artist and finding out what makes them create, drives O’Neill. An artist himself, the ‘Why?’ behind others’ artwork fascinates him, and he has set out to capture that on film.

O’Neill was born and raised in Youngstown, Ohio. He grew up in the Rust Belt and graduated from Youngstown State University. He left for Florida to enter the prescribed burning field with the Nature Conservancy. He was hired by “Sticky” Steve Morrison to be a part of the burn crew at Tiger Creek Preserve. Morrison is O’Neill’s latest film subject and the subject of 50 other artists as well. But, more on that later.

He settled down in Lake Wales where he met wife, Lita. The couple has two kids – 15-year-old Lily and 12-year-old PJ. O’Neill has been a professional firefighter for 19 years. The family man and firefighter also enjoys tending to his garden on the lot beside his home. He has filled his food forest with moringa, Meyer lemons, pineapples, avocados, papayas, and muscadine grapes. He’s somewhat of an amateur beekeeper as well, with two hives on his property.

As a child, O’Neill was always making something or being creative in one way or another. “It came naturally to me. It was comforting,” he said. The self-described hobbyist filmmaker has always preferred documentaries over other genres, though he didn’t consider making one himself. “This film series came out of nowhere,” he said.

Eight years ago, O’Neill was on a fire alarm call in Orlando. At the building they were called to, he encountered a group of UCF students making a short film. When the call was settled, he struck up a conversation and asked what kind of cameras they were using. They told him, and he went out and bought one. He began making films. “I just started with my friends. I knew nothing about filmmaking, cinematography, anything like that. All I knew, is that someone was doing it and I wanted to do something similar to that,” he said. “I had this drive to create something.”

He wanted his projects to be something that he enjoyed, and if anyone else was interested or entertained, that was great too, but it was secondary. The series morphed from profiles of his friends to artists of varying mediums.

“It wasn’t a straight path to it – it was minor micro-adjustments to where it is now. I’m not saying I’ve met the goal, but it’s a lot further than where I started,” he said.

The minimal yet resonating cinematography of his Eye for Art film series was inspired by another Vimeo creator, Jesse Brass. O’Neill would watch his films with pen and paper in hand, taking note of transitions, close-ups, when the music was introduced and other stylistic elements. O’Neill contacted Brass at one point to tell him that he had been emulating his style and even credits him for inspiration in his films.

The subjects for Eye for Art contrast in medium and style, but they all must have one thing in common. “I have to like their artwork,” said O’Neill. Many of his subjects were contacted via cold email or by introducing himself to them at an art festival. He sees his films as something the artist can use to benefit their artwork and help him further develop his cinematography skills.

“What’s important is why,” he added. “I go into it trying to get to the most basic, distilled version of ‘Why are you doing this?’”

He understands the complexity of this question and anticipated that I would ask him the same. “Who knows why we do anything,” he said. So why does O’Neill create films? “There’s this concept I really like: People don’t have ideas, ideas have people,” he said. He thought about the truth of that phrase, how an idea can enwrap you entirely. “I go into the film with questions that I think will bring out the essence of why they’re doing it,” he said.

He talked about meeting the artist for the first time. “We’re both figuring it out in five hours – and there’s something nice about that. There are no preconceptions coming in.” He wants their interaction to be genuine. If they apologize for the state of their studio, he says, “I’m glad it’s a mess – I want to find you in your normal habitat.” His films are made for two people – himself and the artist he is capturing. O’Neill said, “It’s tough to be alive – we’re all going to face hardships. What’s the antidote to that? It’s not happiness, it’s meaning. And for me, this is an area that brings meaning.”

The Lake Wales filmmaker has profiled 24 artists in his Eye for Art series so far.  Some of the artists he has interviewed included Bok Tower Gardens director, David Price, Polk State College professor of art, Holly Scoggins and Winter Haven artist Trent Manning among other impressive names.

A documentary film called, “The John Show” unintentionally inspired O’Neill to make friend and mentor Sticky Steve Morrison the subject of an epic art exhibit. The film, by Julie Sokolow, documented Pittsburgh graphic designer, Brett Yasko asking 250 artists to each do a portrait of his friend, John Riegert, over the course of two years, at the end of which, they all came together for an exhibit of the work.

It wasn’t until a year after he had watched the film that the idea hit him. “I started sending cold emails out that day before I even asked Sticky,” said O’Neill. Five artists had already signed up before he told his subject.

Hired by Sticky to be a part of the Tiger Creek Preserve burn crew, O’Neill was impacted by the conservationist. “He became a mentor whether he realized it or not,” said O’Neill. “How he lived his life – it really imprinted on me. There are different ways to live your life in a meaningful manner and he is the epitome of how to do that.”

The filmmaker spouted off a handful of Sticky’s many life accomplishments – he is a musician, conservationist, former commercial beekeeper and most significantly of all, he is kind to people. Sticky was also the person who introduced O’Neill to his wife Lita. O’Neill said of Sticky, “He’s the most humble person.  You’ll never hear negative words out of his mouth.”

Though O’Neill is 45, with a family and a career and mortgage, he said, “I still look up to him. ‘What would Sticky do?’ That comes to mind often for me.” He is so humble, in fact, that when O’Neill approached him about the exhibit, Sticky sent him a list of names he thought would make better subjects for the project. Paul told him no, he was set on having him be the subject.

There will be no judging of the work, but participating artists are free to sell their pieces. Some have already committed to selling their work to donate to Sandy’s MusicGirl Scholarship, a scholarship program and camp for girls ages 6 to 19 to learn music, creativity, and self-confidence. Sticky started the program in honor of his wife Sandy Greer Morrison who passed away in 2014.

Sticky has already sat for numerous portraits and paintings by contributing artists.  “Sticky is getting out and meeting people he’s never met before.  Other people are meeting Sticky, and meeting each other,” said O’Neill. Artists have said to O’Neill, “This has really changed the way I see things – I haven’t met anyone like this guy before. Thank you.”

The date and venue of the exhibit will be announced soon, but those interested can find updates on The Sticky Steve Exhibit, 2020 website.

When he isn’t masterfully documenting the work of other artists, O’Neill is working on his own mixed media artwork. His work is typically created using stencils he makes from photographs that he takes. “I use spray paint or reclaimed wood and materials you don’t generally consider art materials,” he said.

Though he’s been creating art his whole life, it wasn’t until recently that he started to show his work. He’s had shows at Outer Space Gallery, Lake Wales Library, and claimed third place at Art Crawl this year. “It’s been a huge surprise to me,” said O’Neill.

Apart from the occasional stranger, the subjects of the photos he uses for his work are familiar – friends and family, people close to him. “They mean something to me,” he said.  He showed us an abstract stencil of a person eating popcorn in Canada, several shots of Sticky, and his kids.

Beyond the Sticky Steve exhibit and other current projects, he thought about what the future of his films and artwork might look like. He said, “A phrase that I heard someone say is, ‘Artists are people who go out into the world and come back and report what they’ve seen – even if they don’t understand it.’” O’Neill thought to himself, “Especially if they don’t understand it.”

We finished by asking him,  “What are you grateful for?” O’Neill thought for a moment and said, “Coming home and looking outside and knowing my kids are doing well and my wife is happy – that’s what makes me grateful.” He added, “I’m grateful to have some meaning in my life – my artwork, a film series working with people. That brings meaning to my life.”