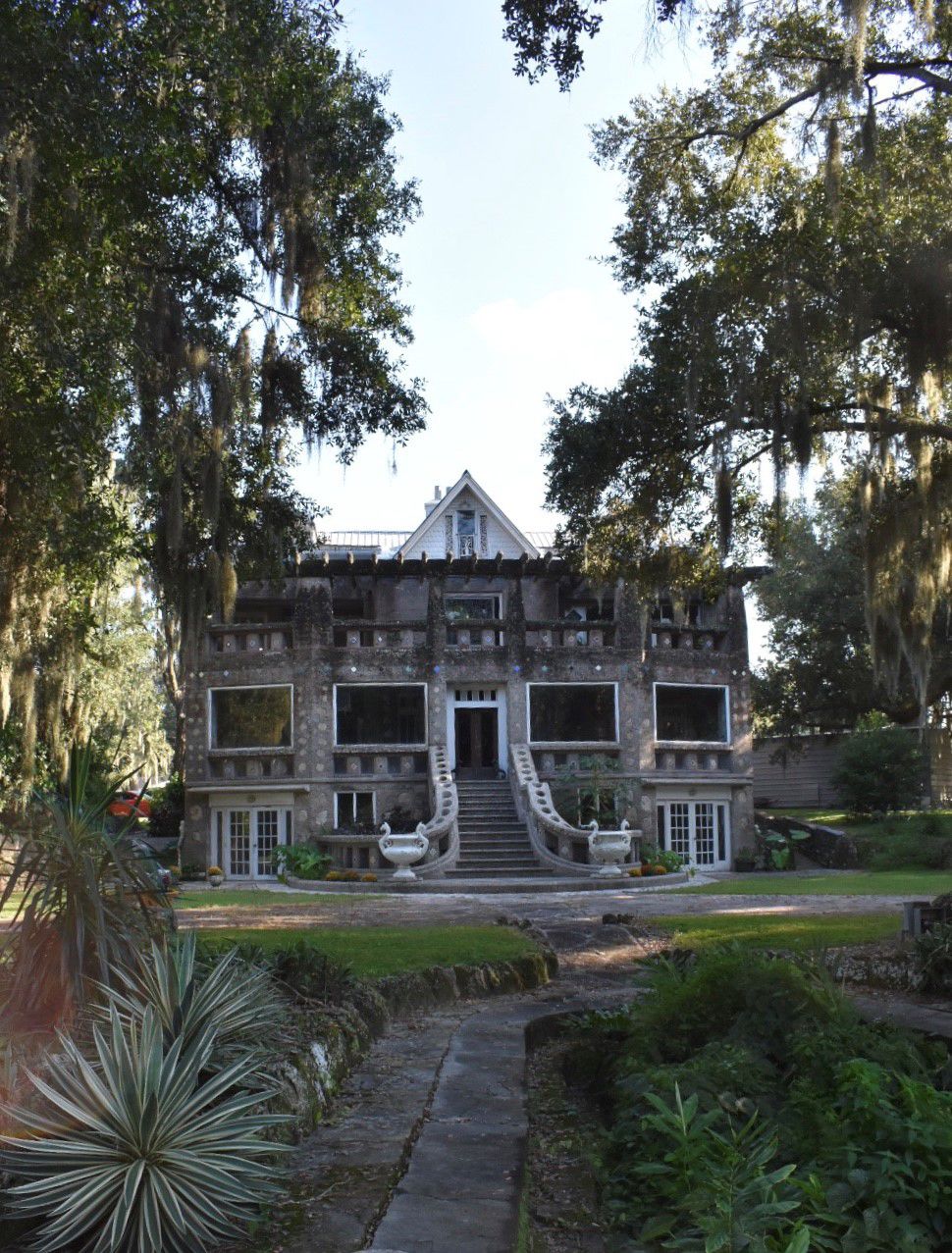 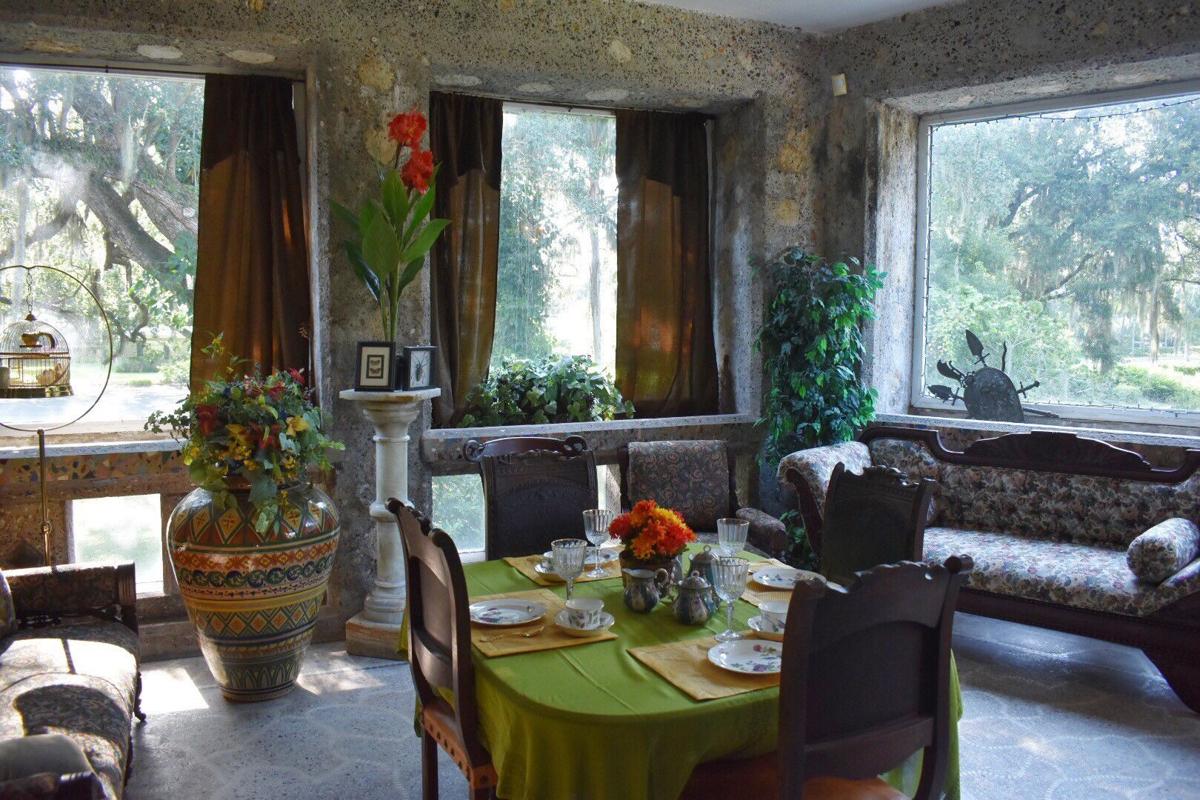 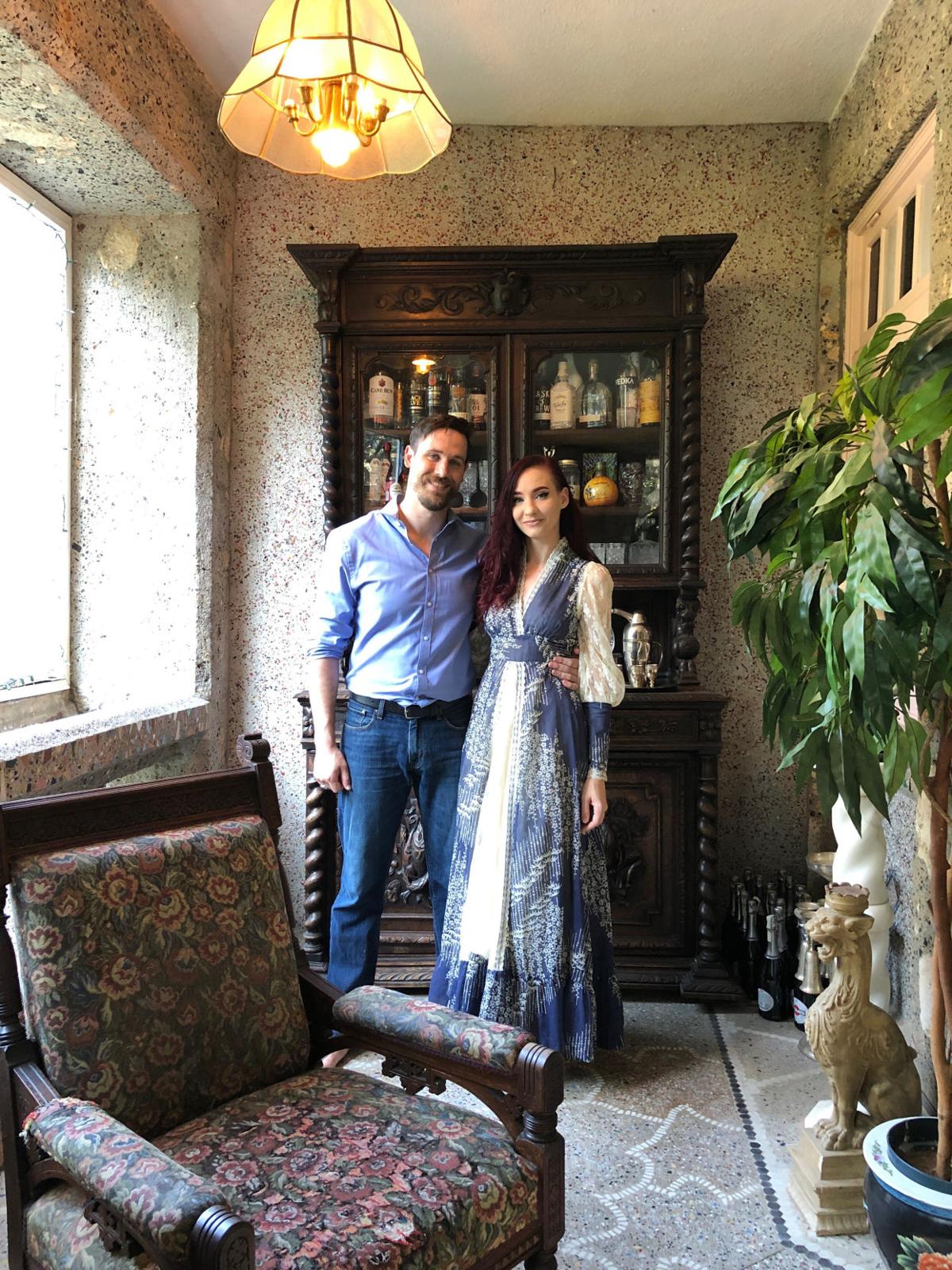 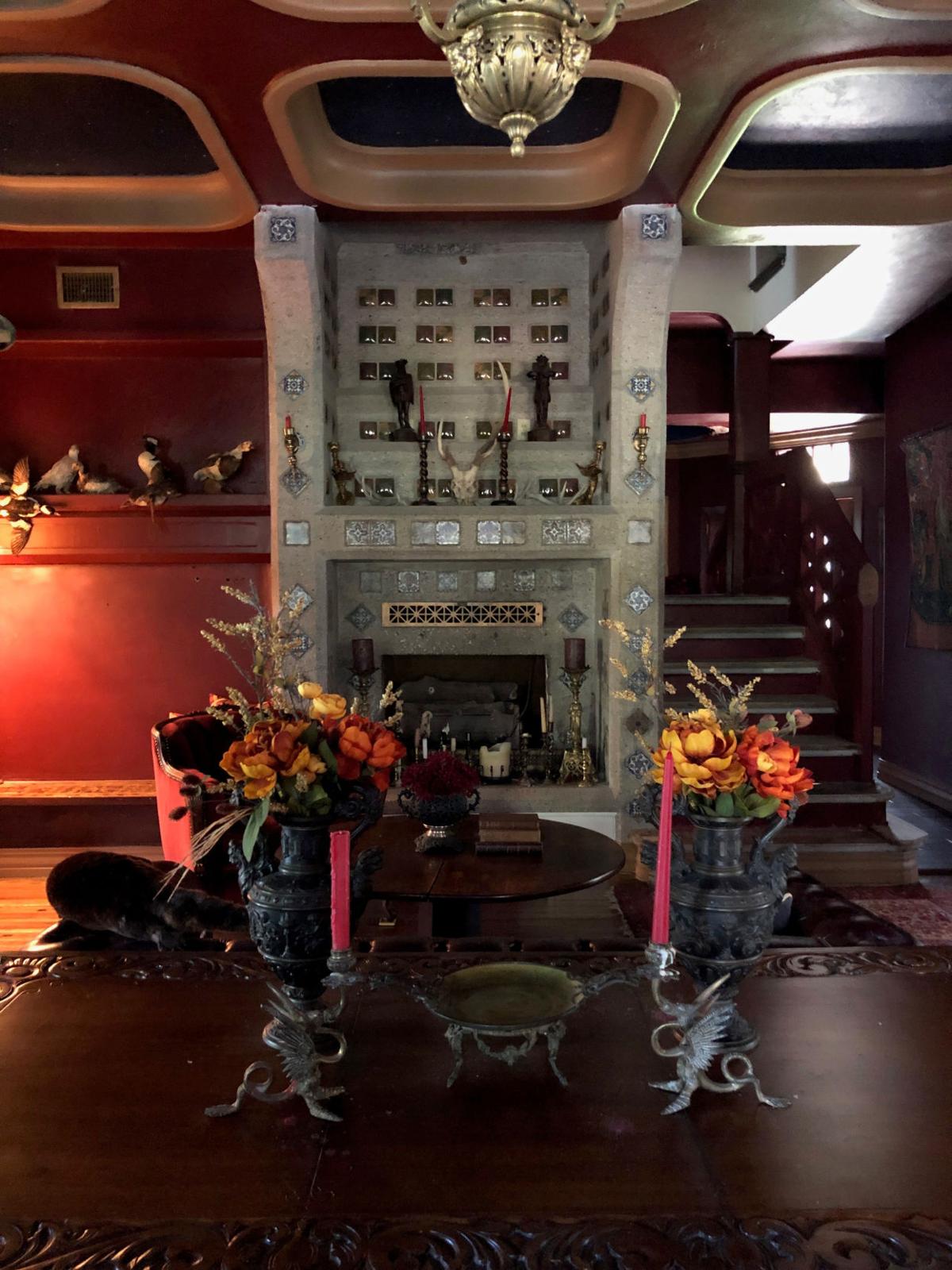 Tucked away in a sleepy Bartow neighborhood not far from bustling Highway 17, rests a grand architectural art piece devised by an eccentric inventor in the 1920s. One of Florida’s earliest tourist attractions, the Wonder House is presently home to Krislin Kreis and Drew Davis. After falling in and out of disrepair between owners, Davis and Kreis have breathed new life into the house and in June, opened it for historic tours again.

Born to a poor family outside of Pittsburgh in 1877, Conrad Schuck grew up with dreams of becoming an entrepreneur. He found success starting a stone rock quarry and as a building contractor.

According to Davis, a railroad company claimed eminent domain over Schuck’s land, leading to a legal battle that found its way to the U.S. Supreme Court. He lost the fight and in turn lost everything. The stressful ordeal claimed Schuck’s land and his health. “His doctor said he had a few months to live and if he moved down to the warm tropical Florida climate, which was popular back in the ’20s, he would live an entire year,” said Davis.

Thinking the clock was ticking on his last year to live, Schuck moved his wife and nine children to Florida in 1926 and began building his dream house. The tropical weather must have been good to Schuck because he went on to work on the house for another 30 years.

Determined to invest his money wisely, Schuck invested in the stock market and Florida land. By 1928, Florida land had busted followed by the onset of the Great Depression in 1929. “He has no money, wants to finish his house and that’s when he opens it up for tours,” said Davis.

Tours of Florida’s Wonder House were “wildly successful” according to Davis. He’s read some interviews claiming the house attracted 2000 guests every week. It had garnered such a following that in the late 1930s, The Florida Department of Tourism called Wonder House the number one must-visit attraction in Florida. The Wonder House had made a name for itself as one of Florida’s very first (and few still standing today) attractions, predating the omnipresent mouse by some forty years. It remained popular into the 40s, continuing to gain traction. “That’s when Conrad starts branching out from doing mostly oddities and normal tours of the house into inventions,” said Davis.

By the 1950s, his children who had helped with the house moved on, leaving Conrad by himself. By the 1960s, he had gotten too old to maintain the property. Land deeds show that around this time, Schuck gave the entire 14-acre property away to a church for just $1000. According to Kreis, all but the 2-acre main property was subdivided in 1963, creating the surrounding neighborhood.

The Wonder House and main lot went to Lucy DuCharme next.

DuCharme – a larger than life classy southern lady who often donned large hats, white gloves and drove around in a convertible Cadillac according to Davis – did plenty of entertaining in the house and was rumored to have had Elvis Presley there once. A photo of Elvis playing piano in the home is said to exist, though Davis and Kreis have yet to see it.

DuCharme passed away in the house and it remained abandoned until Charles Heiden purchased it. He poured money into fixing up the Wonder House until an ongoing spat with the city forced him out. Davis said, “It got to a boiling point over the barn out back and he ended up packing up everything, tearing everything out of the house and just leaving.”

It was again abandoned, during which time it was significantly damaged and left in disrepair.

The Wonder House is made of concrete reinforced with steel (from local train tracks) tessellated with tile and glass mosaics.

Because Schuck didn’t think he had long to live, he didn’t use blueprints to build the house. In fact, only one floor of blueprints exist. The four-story home, including two stories underground, is somewhere between 5000 and 12,000 square feet of stunningly interesting invention and design.

The house is shaped like a cross with porches on every corner – some of which have been enclosed by various owners. The structure’s shape was part of the air conditioning system. According to Davis, in the center of the cross on every floor sat a fireplace. When lit, the warm air would go upwards, and it would suck air from outside. The two and a half foot thick walls covered in creeping fig vine made for a purported four feet of insolation. The air sucked in from outside was cooled from water running through the walls from hollow concrete columns Schuck designed to gather rainwater. “Pretty much every room in the house, when the fireplace was lit, would have a cross breeze because every room has two porches on either side,” he said.

Conrad Schuck was known for his collection of oddities within the house, but the Wonder House is a bit of an oddity in its own right. From beautiful tile mosaics and hand-painted ceiling panels to hidden rooms and clever inventions, the Wonder House is the amalgamation of an eccentric dreamer’s boundless imagination and vision.  Some of the home’s notable features include a moat with two bridges spanning it and two pools on the third floor (one of which has since been concreted in by a previous owner) that were used as bathtubs, swimming pools, and then koi ponds. A gigantic concrete pergola looms over the third floor. In times past, it too was draped in fig vine to shade the porch from the punishing Florida sun.

One of Conrad’s only original inventions remaining in the house is a 21-square foot rotating kitchen cabinet. Kreis said that there used to be many fascinating inventions sprinkled throughout the house. For various reasons, throughout its history, those have been manipulated.  “There used to be a laundry chute system that connected all the bedrooms in the house,” said Kreis. “Because the house has two-foot thick concrete walls when they went to put in air conditioning, the only way to do it was to go through the old laundry chute system.”

Interestingly enough, Conrad Schuck and his family never actually occupied the Wonder House. According to Davis, Schuck wanted every detail finished before he moved in – the details, however, were never close enough to completion for his liking.

The Wonder House’s popularity and tourist magnetism in its heyday saw many newspapers and tabloids filled with salacious claims about features and things that allegedly happened in the house. Admitted history buffs, Davis and Kreis have poured over hundreds, perhaps thousands of articles about the house. Comfortably familiar with its history, preparing for the tours meant putting on detective hats and sifting through bogus accounts. Many of the stories they thought were surely false, have turned out otherwise. Like that of a sunken tub that tourists could lay in and see the front door through Schuck’s mirror system. It took three layers of flooring to get to the sunken tub, but alas, it was there! Extra escape tunnels, hidden passageways, and secret rooms have been posited and some confirmed. You’ll have to take the tour to find out more about that!

Davis and Kreis acquired the house at auction in September of 2015, closing in October.

Krislin Kreis moved to the United States from Estonia with her parents in 1993. Growing up on Fort Myers Beach, she always knew she wanted to be an artist. She went to Ringling College of Art and Design for Photography and Digital Imaging. Kreis spent five years in fashion marketing before acquiring the Wonder House in 2015. Following two years as a TV production teacher for Polk County Schools, she now teaches photography at Union Academy in Bartow.

Drew Davis, from Virginia originally, attended the University of Virginia studying economics before coming to Florida for law school at Florida State University. He now works as a prosecutor and takes an interest in discovering and restoring the Wonder House with Kreis.

The couple share the Wonder House with their sweet pup, Joan of Bark.

Despite the condition of the home when they first acquired it, without running water or electricity, Davis moved in and immediately began restoration efforts. Kreis moved in two years later, though she would commute to work on the house in the meantime.

The first of the repairs to be done was to dig up the overgrown plants in the moat that were so pervasive you couldn’t see the steps. They also took down the front door and refinished it. The first room to be completed was the dining room. This is Krislin’s favorite room in the house. “It was the first room we finished and the light in there is dreamy,” she said. The way the vibrant stain glass reflects on the table she described as, “just magical.”

According to Kreis, anything they do to renovate the house, they approach asking themselves what Conrad Schuck would do. They stay close to his vision but take into account modern conveniences.

Keeping to the home’s history and Schuck’s vision, the couple has tried to furnish the fortress in the fashion of a Germanic castle. In honor of Conrad’s pickled snake and oddity collection, they too have an oddity display.

“My original plan for it was a ten-year plan,” said Davis of the Wonder House restorations. “We’re four years in, so I guess we’re on track, at about 40% completion.”

The Wonder House will be open for special family-friendly Halloween tours. The pair are sifting through stories that would be fitting for the spooky holiday. The tours will still be historical, with a tinge of spooky narrative. Don’t expect anything to pop out at you or to see zombies or guts, but rather to indulge in creepy Wonder House stories. “There’s a story about Conrad Schuck having a coffin in the parlor because he got too lazy to take it down from Halloween,” said Kreis. She plans to adorn the parlor with a coffin, flowers, and candles in a Victorian funeral scene.

“It will be more of the dark side of the Wonder House with stories that people have told us,” said Kreis of the Halloween tours.

Krislin loves to decorate for the holidays, especially Christmas. This year, she’s excited to open the Wonder House in all its winter magic to tour-goers. Davis and Kreis would like to break the tours into a nighttime tour and a regular Saturday Christmas tour.

Admission to the special nighttime tour may include complimentary snacks and beverages to add to the merriment. Bathed in sparkling Christmas lights and filled with holiday cheer, “You’ll get to see a different side of the Wonder House,” said Kreis.

Historic Tours of the Wonder House are available only by booking a reservation online in advance.

In a Nutshell: Growing Macadamia in Central Florida

Paper Not Plastic: GreenWise Bringing a Food Experience to Lakeland