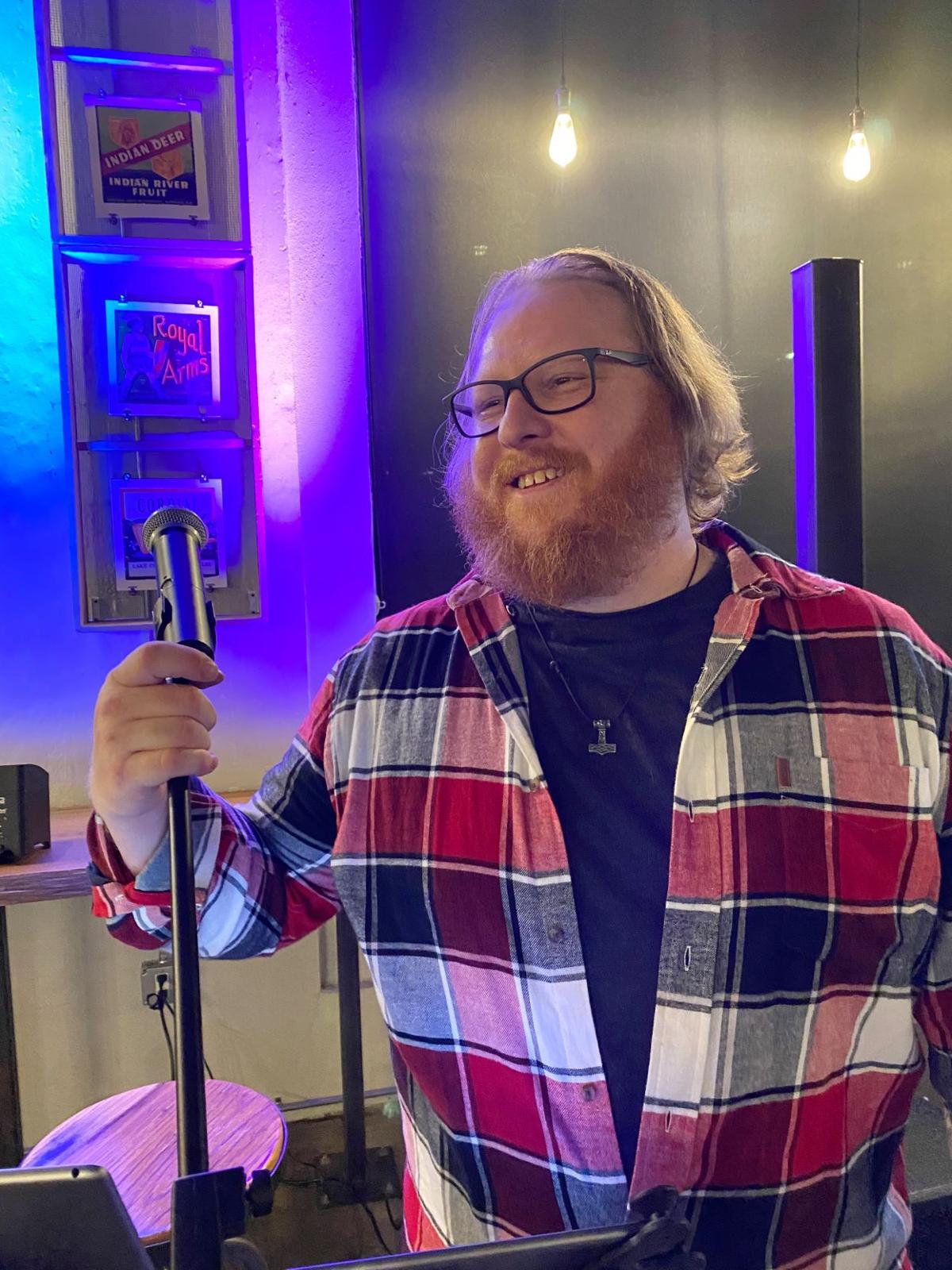 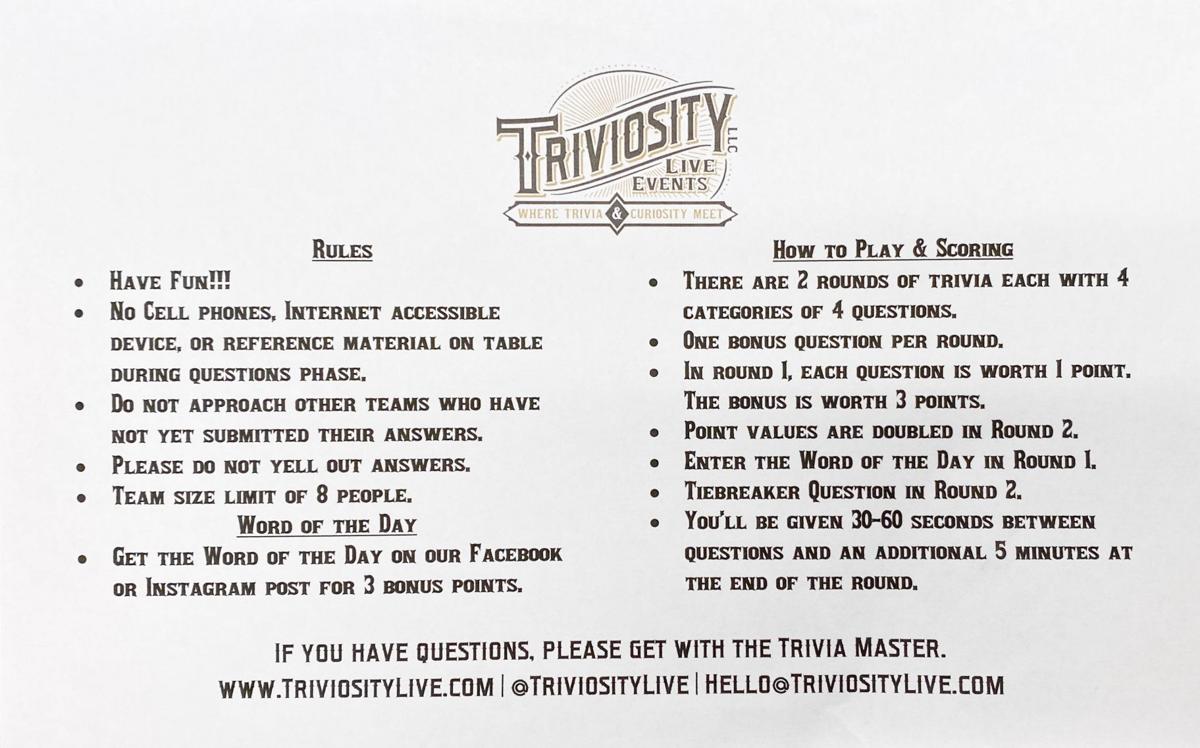 Whether he’s served you a beer at Grove Roots, told you a joke, or stumped you with a trivia question there’s one thing you know about Thom Bly – he’s a born entertainer. Bly has taken this natural charisma and knack for putting on a show and turned it into a growingly popular full-service live entertainment company in Polk County and across Central Florida.

Bly was born in Ohio where his parents stayed until he was two. They moved to San Diego for a few years before moving to Lakeland to take care of his grandmother. He attended school from kindergarten through high school here, graduating from Lakeland High School before attending Florida Southern College. He decided to take a break from school and landed a job as a flight attendant for United Airlines. He lived in Chicago for a few months during training and was based out of New York for several years.

He took a furlough from his job to temporarily move back to Florida to help a friend who had just had a baby get settled. “I was planning on going back to New York,” he said. “Then I met a girl and fell in love and got married.” Thom and his wife Ash, a Winter Haven native, have lived here for nine years. He is a programmer by day with some ten years in the IT field and bartends part-time at Grove Roots. It’s his third job though, that is particularly interesting.

“I’ve been going to trivia nights since college,” said Bly. He enjoyed learning about an array of subjects and found himself watching tv shows like Jeopardy and Who Wants to Be a Millionaire. He and his wife stumbled upon a trivia night at the former Slyce Pizza Kitchen.

“It turned into a weekly family event,” said Bly. He and Ash along with her parents, sister and family friends would get together to outsmart each other on trivia night.

The person running the trivia events moved to south Florida, leaving Slyce to find another trivia host. One night, unenthused with their new host, the Slyce owner was talking with Bly and his in-laws. They mentioned wanting to find someone new to host trivia. “My father-in-law slaps me on the shoulder and says, ‘Thom can do it!’” remembers Bly.

“I thought about all of the trivia shows that I enjoyed doing over the years and kind of took the best parts of each one of those things and tried to bundle it together into my own thing,” he said. With the material he’d put together Bly put on an audition show for the job and they loved it. This was his first foray into trivia.

Triviosity Live Events is the name he gave his new business. “I started doing as many shows as I could because I was having so much fun with it,” said Bly. He would put on trivia events at locations around the county –  including Grove Roots, Cob & Pen, Beer Rev (now Craft + Kitchen) to name a few.

The bread and butter of his trivia business is general knowledge. The breadth of the topics makes it approachable for anyone sitting at a bar or restaurant when they’re hosting an event without having to know about a single niche topic.

Thom curates the shows himself, breaking them down into mini categories. He’s now curated around 200 shows to this point, keeping pace at about four shows written per week. “My way of forcing myself to learn more things that I enjoy learning is to go into that Google rabbit hole,” he said.

Where some trivia companies pay for a set of canned questions, Thom spends hours losing himself on the internet exploring categories and subcategories for fun and challenging questions for each show. “I don’t want to do the thing that everybody else does. I want it to be different and unique and fun and exciting for everybody,” he said.

With a growing demand for his brand of entertainment, Bly has the help of similarly engaging Triviosity team members to host shows around the county. He described his hosts, Taylor Zaudtke, Austyn Harben, and Kevin Zimmer as amazing hosts and “friendly, outgoing people.”

He started offering his trivia services for corporate events as a reprieve from the typical cocktail party and teambuilding. A corporate client asked if he could DJ for them as well – why yes, yes he could. “That’s kind of how it happens with me,” he laughed. “Someone gives me an idea and I make it happen.” Bly has been called a Jack of All Trades, a real Renaissance Man – he loves to learn new things and pick up new skills whenever he can. He bought a controller and started taking lessons online. He has admittedly always had an affinity for music and had dabbled in the DJ booth during college. He gathered popular songs and songs that he liked to prep for the gig. The event went swimmingly and he added DJing and emceeing to his repertoire.

We picked up some tips to elevate the entertainment at your event courtesy of the Triviosity founder.

Bly described the process of consulting with a client, saying that he first makes it a point to get to know the client and learn about their event. He’ll ask for a rough timeline of the celebration and what needs and wants the client has so he can let them know which of those he can fill.

Triviosity Live Events is a one-stop-shop when it comes to DJing and emceeing. Bly has music, a lighting system, video screens, and projectors to provide an all-inclusive experience for his clients.

He gives clients an information sheet on which they can list out the different sessions that they’ll have throughout the event, along with what kind of music they like and any songs they specifically do or do not want to hear. “Not everybody wants to hear ‘Baby Got Back’ at their wedding or their corporate function. Some people really want to hear it, so I give them that option,” he said. “I’m here to make this event whatever you want it to be.”

Another meeting is held between one month and one week from the event to go over the information sheet and discuss the plan for the party. With permission from the client, he likes to have a little bit of freedom to play what guests are responding to the day of.

If the hosts agree, the DJ will open it up for requests. At a recent wedding he did, the couple had their guests pre-request songs and made a spreadsheet to give to Bly. He says pre-requesting is something he plans to start doing when possible.

Another piece of advice Bly had was to not leave the entertainment as an afterthought. Often, people will book a venue, hire a caterer and a photographer and tend to other details, leaving the entertainment for last when their budget is all but depleted. Unfortunately, you often get what you pay for.

“Our big suggestion is don’t always go to someone based solely on price. Talk to several entertainers,” he said. Ask about what they can do to make your event special for you and your guests.

“You’ll find a lot of times that you might pay a little more for somebody willing to do all those things, but it makes the event so much better,” he added. For weddings, he recommends booking the entertainment six to ten months or longer in advance and corporate gigs, two to six months. Always keep in mind that the holidays are busy, so booking in advance is preferable. The earlier, the better is a good rule of thumb.

For a Good Time Call

The Triviosity team also uses its powers for good, giving back to the community when they can. In December, they collected and combined all of their tips to purchase bikes for children in less fortunate homes who may not otherwise have received presents. They bought eight bikes and scooters with helmets to give away. Grove Roots heard about their initiative and matched the contribution, bringing the total to 16 bikes and scooters. They were donated to the Winter Haven Police Department and went along with them to deliver the gifts to the families.

Bly also does events like the WHPD 5K benefiting the Special Olympics for free – something he’s done for two years now. In March, he’ll also be providing the entertainment at CommunityFest hosted by the Greater Winter Haven Chamber of Commerce, free of charge.

“I was born in Ohio and I’ve lived in a couple of other places, but Polk County is home for me. It’s treated me mostly well throughout my life and I enjoy being able to give a little something back in any way I can,” said Bly.

Entertaining people comes naturally to Thom Bly – he’s been in some form of service or entertainment for twenty years now. As a waiter and bartender, he would perform bar tricks to get guests excited. When he was a flight attendant, he would find his way to the microphone during pre-boarding or safety announcements to make folks laugh.

“When I bartend at Grove Roots I do a lot of the same thing – making jokes with people, having fun [...],” he said. “I bring all those years of fun and excitement into our trivia show.”

What’s Bly’s favorite part of the job? “Seeing people happy,” he said. “I know it’s cheesy and corny, but, […] at my core I’m an entertainer and that’s what we like to see – we like to see people having a good time.”