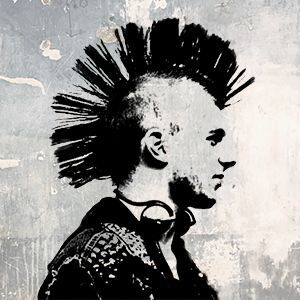 Back in 1987, I saw the man of my dreams and he was so punk.   He wore super skinny jeans, a leather jacket with band patches sewn on and the same Jane’s Addiction shirt almost everyday.   He played bass in a punk band called Haunting Souls and I went to every single one of his shows. One look at him and he stole my heart, I fell hard.  I also loved the music, (favorite show was Bad Brains at St. Andrews Hall in ‘90) dressed in my own thrift store finds and shaved one side of my head. We were a perfect match.  We dated, and then I went off to art school.  Was the love story over?  Where is he now?  He’s in the office behind me, I married him and he will always be my favorite punk rocker.

Punk was born in the early 70s with groups like Iggy and the Stooges, MC5 and the New York Dolls.  The Ramones released their self-titled album in 1976, which has been said to be the blueprint for all punk music to follow.  The movement spread to Britain with bands like the Sex Pistols, The Clash and Buzzcocks.  With fast, aggressive beats and socially aware lyrics, Generation Xers, full of teen angst found something to believe in.  Nirvana hit the mainstream in the early 90s and along with Green Day a whole new generation was introduced.

After the huge success of the first Punk Rock Flea Market back in March of this year, there was no doubt there would be a second one. For one day, Swan Brewing will be immersed in Punk Rock, bigger and better than the first time.  But what is it exactly?  We sat down with the organizer, Chad Chastain to find out what to expect.

First, a little about Chad.  He was born in Atlanta and raised in a small, rural town surrounded by country music. He hated country music. When he was 13, his world opened up.  While sitting in his mom’s Chevy Astro van in the parking lot of a Pizza Hut, he heard Green Day and Offspring for the first time.

Two years later, his parents divorced and he ended up in the little town of Conway, AR. That’s where he really fell in love with the punk rock community explaining, “I started playing guitar, drums, and singing in any band that was around. After booking several shows, I created a website in the early days of the internet which I called ArkanSuck (www.angelfire.com/ar2/arkanSuck) to serve as a resource page for the music community for the entire state of Arkansas. “It helped connect bands, venues, labels, and the scenes that didn’t know each other existed. It also enabled younger bands to play shows with more established touring bands.” What I liked most about it was that through that simple website, I was able to witness a tight, loving, supportive, underground music community flourish in a state that otherwise should have ignored it or shut it down.”

At age 20, Chad was working at a Guitar Center in Little Rock, when he married his best friend, Ellen.  They transferred with the company to Orlando to be closer to his older brother in Tampa who was seriously injured by a drunk driver. He continued, “Lakeland was never on the radar for us. We ended up here by accident through my job transfers and stayed thanks to the Polk Museum of Art hiring my wife 17 years ago. I think the smaller town charm just meshed more with our personalities.”

Chad and Ellen have helped run other Lakeland events like Innoskate, Art Crawl and even the Children’s Art Tent at Mayfaire.   They both share a love of celebrating art mixed with nostalgia. Two years ago, Chad was invited to fill in on drums with a Ramones cover band, Judi & The Outsiders, for what was both a punk show and a drag show. “I knew I would love the punk show, but honestly the idea of a drag show seemed awkward, until I saw how they both shared the same aspects of not being “normal” and for being generally frowned upon. That’s when the idea hit me to create an event that melded my love of punk rock and counter culture with my wife’s love of art... and really now that we’re both parents, getting to share that with my kids and friends is just icing on the cake,” Chad said.  That’s where the Punk Rock Flea Market comes in.  For about eight years, Punk Rock Flea Markets have been popping up all over the country.    Chad saw the potential with Lakeland being between Orlando and Tampa and now you can expect a PRFM to happen twice a year with plans to continue to evolve and grow.

So what is the Punk Rock Flea Market?   Chad explained it like this, “The short answer is a counter culture flea market... but the real long answer is an all day party for the entire family that celebrates our underground music and youth cultures from the late 70s through today for those of us who weren’t necessarily in the norm. Here you’ll find vendors from all over Florida selling tons of old records, band t-shirts, oddities, collectables, jewelry, local art, a free DIY button booth, skateboards, bicycles, henna tattoos, horror memorabilia, toys, live music, food trucks, and so much more... plus it’s at Lakeland’s coolest family & pet friendly outdoor bar & brewery. You DO NOT have to be a punk rocker to enjoy yourself or to find a new favorite treasure. This is a fun and safe experience that everyone should share.”  He added, “When most people think “punk” they tend to go negative to what they’ve seen in movies with big mohawks, leather jackets and drunken brawls. I can honestly say I’ve seen far worse things happen at country concerts and children’s sporting events. For the most part, punk culture has always been a safe, caring and supportive world for me, which is one of the biggest things I want Lakeland to see.”

The first punk rock flea market was a giant success and thanks to Swan Brewing, the next one  will be twice the size with an additional tent allowing for more booths, music, food, and an all around good time. Chad ended on this note, “I’m most excited for the community.  This event is such a great opportunity to meet and discover new artists and makers who you never knew lived right down the road. It’s a party. Bring your spouse and your kids, make new friends, talk about when you were kids, put a button on your jacket, grab a drink, pick up a record, a piece of art, a new shirt, and just hang.”