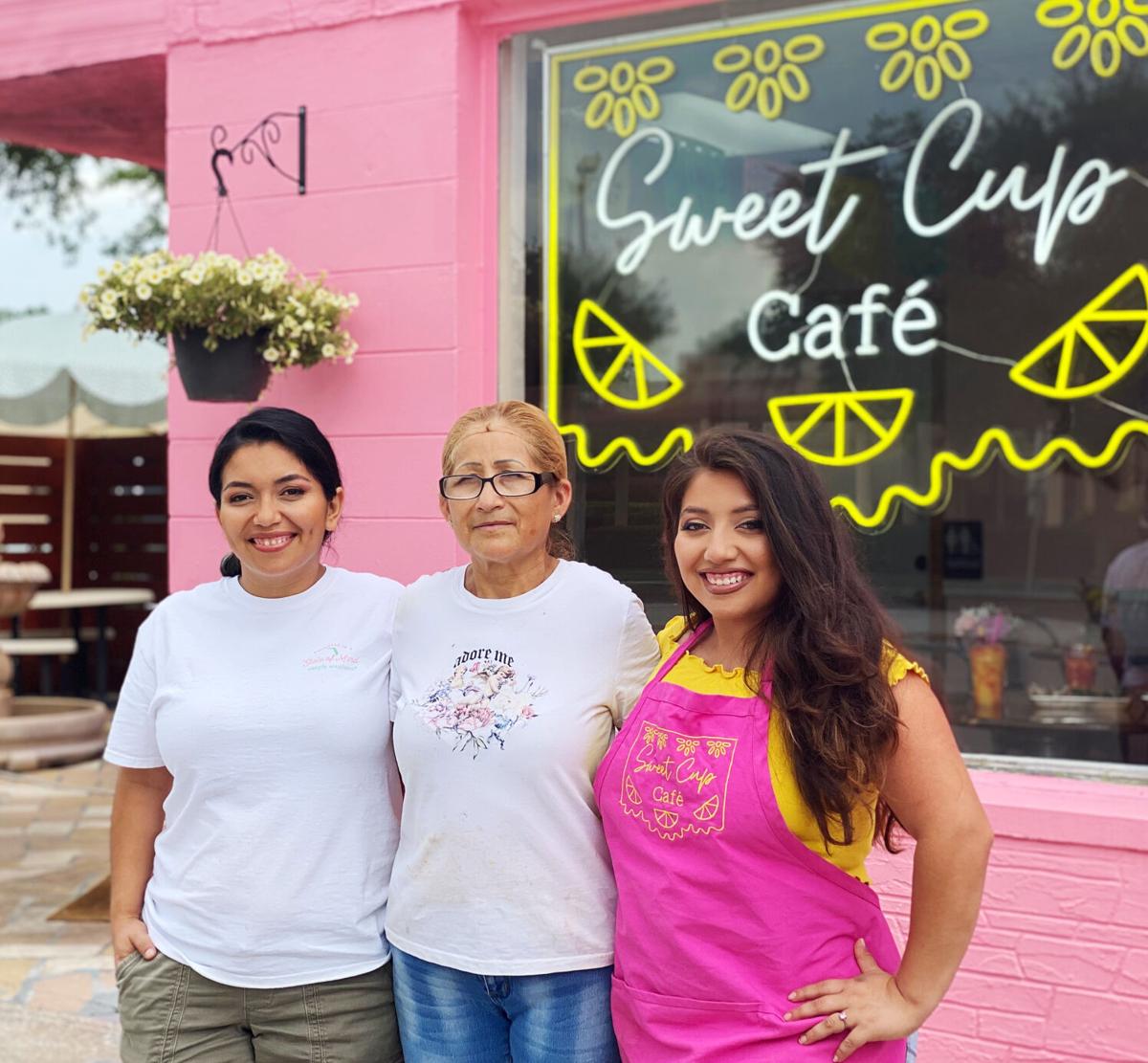 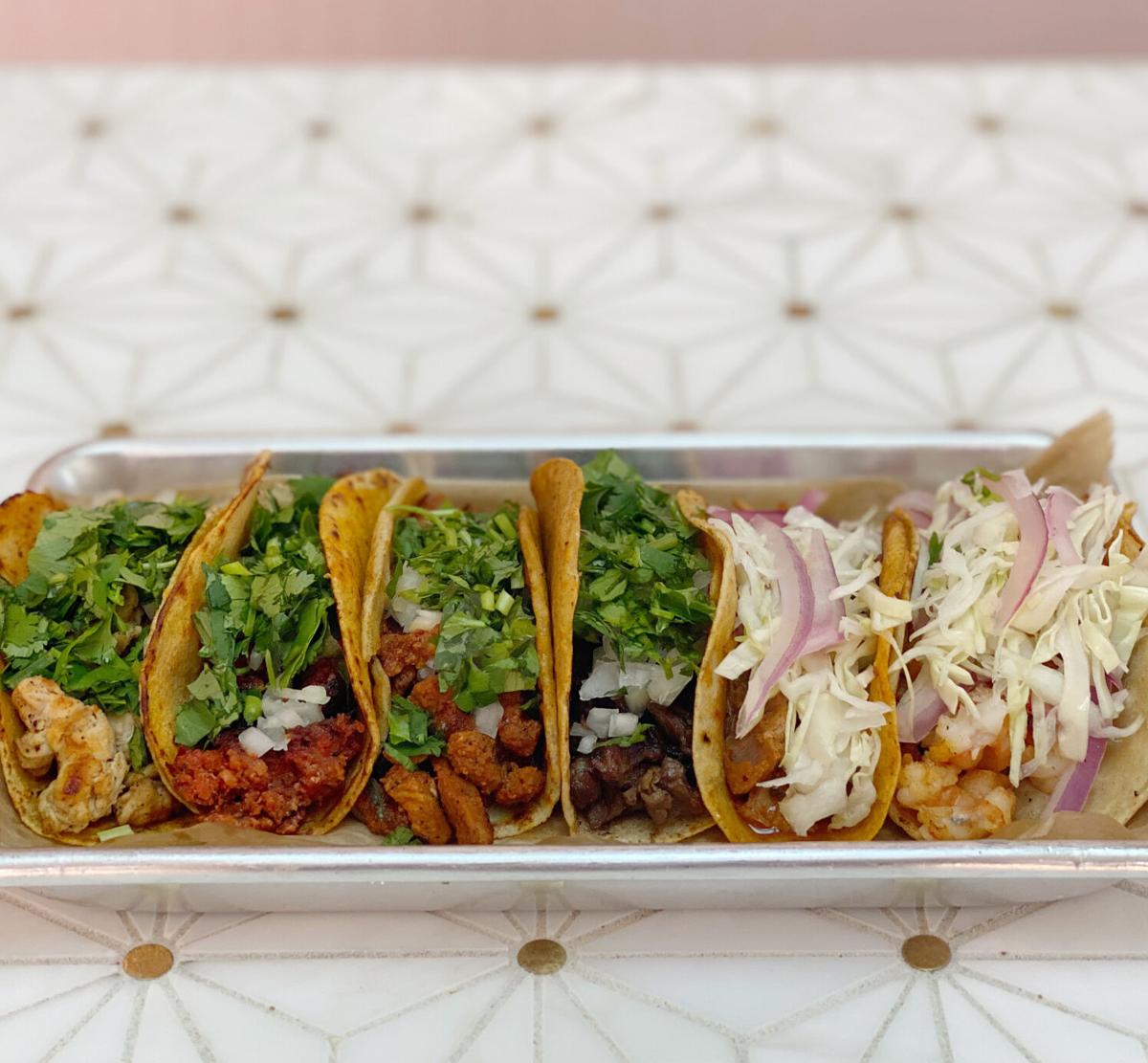 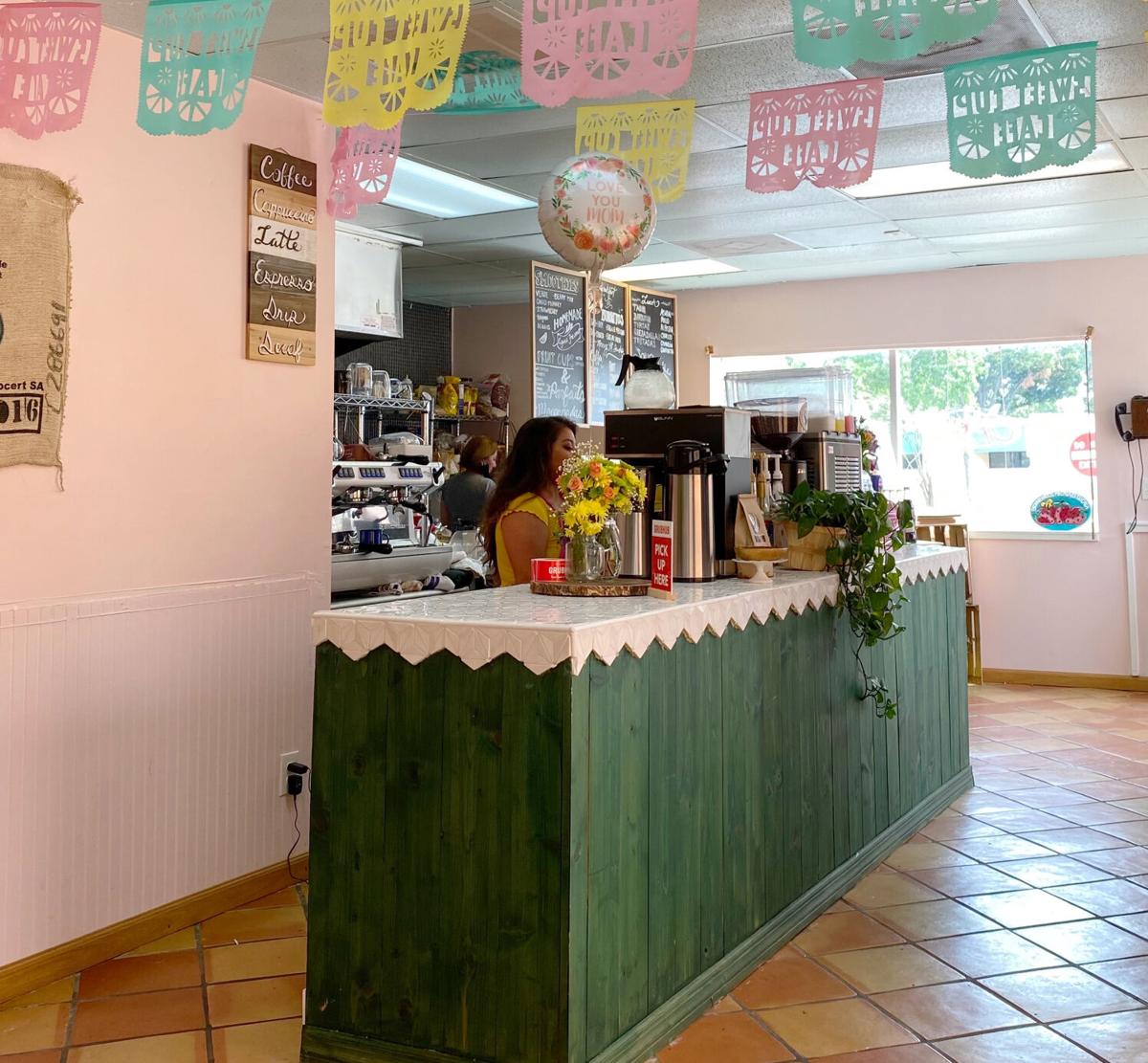 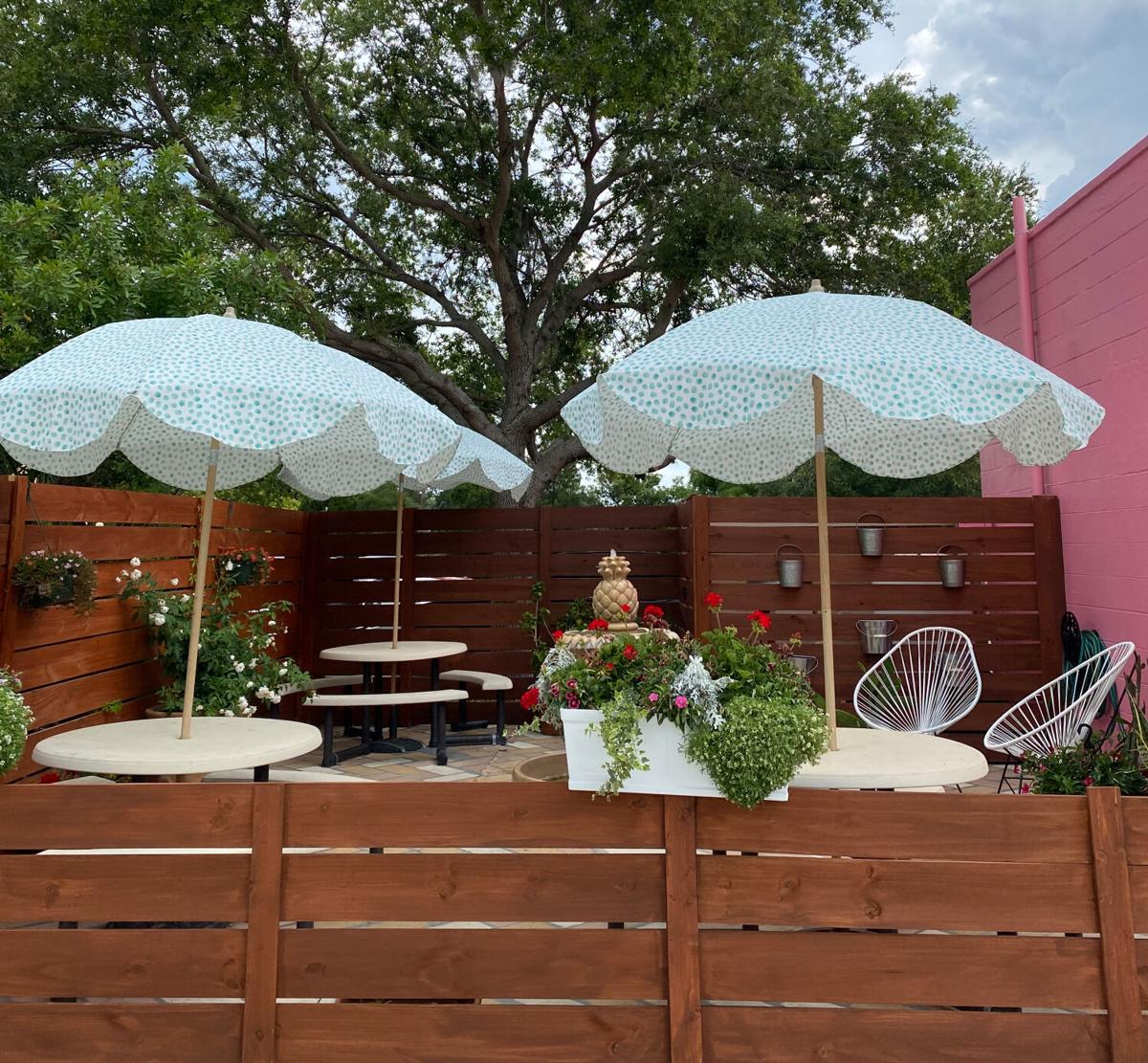 Sweet Cup Cafe is a flash of fuchsia on the northside of Lakeland, a little bubblegum pink building you might miss if you blink. Inside this pleasant little cafe, Francelly and Yesenia Garcia backed by an all-female team, offer home-cooked food from their culture. Sweet Cup offers soups, tortas, tacos, quesadillas, burritos, salads, Aguas Frescas, fruit cups, and mangonadas, made by even sweeter sisters.

Francelly and Yesenia Garcia opened the eatery on March 1. Though Francelly was born in Mexico and Yesenia in Arcadia, the pair have lived here long enough to consider Lakeland home. “I like Lakeland,” Yesenia said. “I like that it’s growing. There are a lot more opportunities. It’s a cute little town.” Francelly agreed, adding, “I feel like Polk County is my home. Lakeland is big enough to where it has everything we need, but it still has that small-town vibe.”

To the Garcia’s, food and love are synonymous. Growing up, the sisters enjoyed home-cooked meals from their mother and grandmother, though they both feel they took it for granted at times. “It’s something that I didn’t appreciate as much,” said Yesenia. “When I realized that I have this amazing food all the time and not everyone does, I started to appreciate food.” A trip to Mexico several years ago compounded that appreciation. “The tacos in Mexico, are truly so much better than any taco I’ve ever had.”

Some of her earliest memories were always having home-cooked meals, especially eggs. “Even though they were eggs, the way my mom made them, they were so much better than anywhere else,” she smiled. For Francelly, it was her grandma’s ‘little taco trailer’ – a vintage travel trailer out of which she would sell enchiladas and tacos. Francelly would eat there at least three nights a week. “We grew up around it, and we’ve taken it for granted a lot of the time,” she said. As other kids unpacked their sandwiches, Lunchables, and leftover spaghetti in elementary school, Francelly remembers craving to be “normal.” “‘Normal’ to me was sandwiches, spaghetti, burgers, hotdogs – but that wasn’t what we ate,” she said. Instead, their meals at home consisted of rice and beans, many dishes infused with chili, spices, cumin, cinnamon, or cilantro. This made her think of the mole she would get from her partner’s sister in Central Mexico. “It’s cocoa, chili, some nuts, and pumpkin seeds. They roast it all, and they grind it, and it turns into this thick brown paste. You simmer that down, add some chicken broth. Then you put some chicken in it. It has so many layers – it’s got chocolate, it’s got chilis. It’s a unique taste,” she said. “I’ve had it all my life. I just didn’t know the process. I didn’t know how rich our cuisine is.”

Working with her sister at Sweet Cup, Francelly has new regard for the food she ate growing up, like the corn her grandmother would grind using a metate. “You put the corn in there with a little bit of water, and you start grinding with a stone by hand. Grandma used to do it all the time. I didn’t appreciate how laborious it was and how good and how rich I had it.” The sisters started in the kitchen around seven or eight years old. “Being in a Mexican family, your dad is always going to tell you that you have to learn how to cook. I had to be in the kitchen, and I had to at least watch my mom and see what she put in the food. I still don’t make tortillas all that great – sometimes I burn them,” said Yesenia, and the sisters laughed.

For Francelly, it was the same, helping out in the kitchen. She started off making and kneading the dough for tortillas, working her way up to putting them on the comal or griddle, picking up the skill little by little.

“We just want to do home-cooking. It didn’t start out that way. We wanted to sell coffee and fruit cups,” Francelly said of the Sweet Cup concept. It was just an idea to start. The new grad didn’t have the seed money to start a venture of her own just yet. But she knew when she did, it would involve coffee. “I always thought about creating something beautiful where anybody is welcome,” she said. “Being not-American in America, sometimes there can be places where you don’t feel welcome – people look at you in a different way. In Polk County, there are a lot of places like that.” Francelly and Yesenia wanted to create an inviting atmosphere where everyone feels welcome.

“We’ve always had this mutual love for coffee. I don’t know if I’m the weird one. I just think everyone wants to own a coffee shop,” Francelly said. Her life’s dream is to make and sell fresh churros and good coffee out of a vintage travel trailer that she could pack up on a shipping container and serve worldwide.

No longer satisfied with selling produce which she described as a demanding and male-dominated business, Francelly wanted to pursue something different. She worked for her father at his wholesale produce company before starting her own with the help of her parents. She loves her father dearly, saying, “Everything I am is because of my parents.” But, headstrong personalities run in the family, and she craved to do her own thing. “In some roles, we are very traditional, but in other instances, he never discouraged us from doing everything that a man can do,” she said of her father.

“I always say, ‘You don’t need a man to do business, but you need a man to do business,’” said Francelly. When she would work with suppliers for the produce business, they often wouldn’t take her seriously, opting to deal with her partner instead. “It got to me. It made me a little resentful,” she said. “I’m the one who has put a lot of work into this. How come just because he’s a man, you take him more seriously?”

After expressing to her partner, who she describes as open-minded, encouraging, and always supportive of her ideas, that she wanted something she had more control over, he suggested making fruit cups and Aguas Frescas. Francelly got her sister on board, and Sweet Cup Cafe was in the works. “We wanted to create something different, something that involved coffee, something where anybody and everybody can come and feel like they’re a part of it,” said Yesenia.

The Sweet Cup Café owners ran into their share of hurdles before opening, from a lease almost falling through, to learning the logistics of running a restaurant, and COVID precautions. Still, they persisted and opened the doors on March 1.

The sisters have assembled an all-female team, including their aunt, the head cook. “We do feel like women can do basically anything a man can do,” said Francelly.  As women often aren’t given the same opportunities or recognition as men in the restaurant industry, it means a lot to Francelly and Yesenia to work with an all-female team. “Aunts, moms, grandmas – they’re the MVPs of food in our culture,” said Francelly.

That love comes in the form of high-quality, honest ingredients. Their steak tacos, for instance, are made with Certified Angus Beef. Herbs like epazote and Yerba Buena are picked from their herb garden outside to add fresh flavor to their dishes.

“I wouldn’t feed anyone anything I wouldn’t feed to my kids,” said Francelly. Many ingredients and dishes at Sweet Cup are hand-made, from their Aguas Frescas to their tortillas. “When you taste a quesadilla, when you taste a burrito, you don’t get that bitter after-taste. You get the fresh tortillas – it’s wheat, water, and a little bit of salt,” said Francelly of their flour tortillas made by hand by her aunt. “Simple things are what makes food good.” Their beans are boiled with herbs from their garden and refried, and the sauce is made with fresh tomatillos. “We put a lot of thought and love into it,” said Yesenia.

If it’s your first time checking out Sweet Cup, Francelly recommends a little taste of this and that. She suggests a steak taco – a classic – along with their cochinita pibil. According to Francelly, the dish originates from Mexico and is traditionally cooked underground. At Sweet Cup, they marinate it with sour oranges, herbs, and spices, wrap it in banana leaves and roast it between six and eight hours in the oven. “That’s something from our home from mom’s side of the family that we wanted to share,” said Francelly of the shredded pork dish. “We want to introduce everything that makes us unique and who we are.

Along with the steak taco and cochinita taco, order any of their from-scratch soups like veggie or pozole. They also offer burritos, quesadillas, and plenty of fruit and fresh drink options. To go with your soup and tacos, Yesenia suggests a mangonata. This frozen treat has fresh mango, ice, added sugar, Chamoy, chili sugar, and a tamarind stick. “It’s really beautiful,” Yesenia said. “When people receive one […] they’re so excited and so happy, and that warms my heart. It makes me feel good to see somebody enjoy something from our culture.”

Fruit cups are another Sweet Cup Café signature. You can get it with any fruit you like – watermelon, cantaloupe, strawberries, pineapple, mango. Traditionally they’re eaten as a snack with salt, lime, and chili, said Francelly, but their sizes are filling enough to be a meal on its own. Something she wishes more people would try in their fruit cups is cucumber. It may not sound like a fruit cup front runner, but Francelly says it mixes sublimely with the salt, lime, and chili.

As for the future, Yesenia and Francelly look forward to expanding – perhaps to the southside.

Francelly shared an anecdote from their dad. He had a professor in college who, at 80 years old, still had significant plans for the future. “My dad made the observation that as human beings, we never stop dreaming. We’re always chasing something. […] I think we’re always going to be chasing something. We’re always going to be like, ‘Okay, we’ve mastered this, what’s next? […] Can we open another one while staying true to who we are while giving the same quality and that same service? That’s what we want to do.”

Sweet Cup Cafe is a flash of fuchsia on the northside of Lakeland, a little bubblegum pink b…