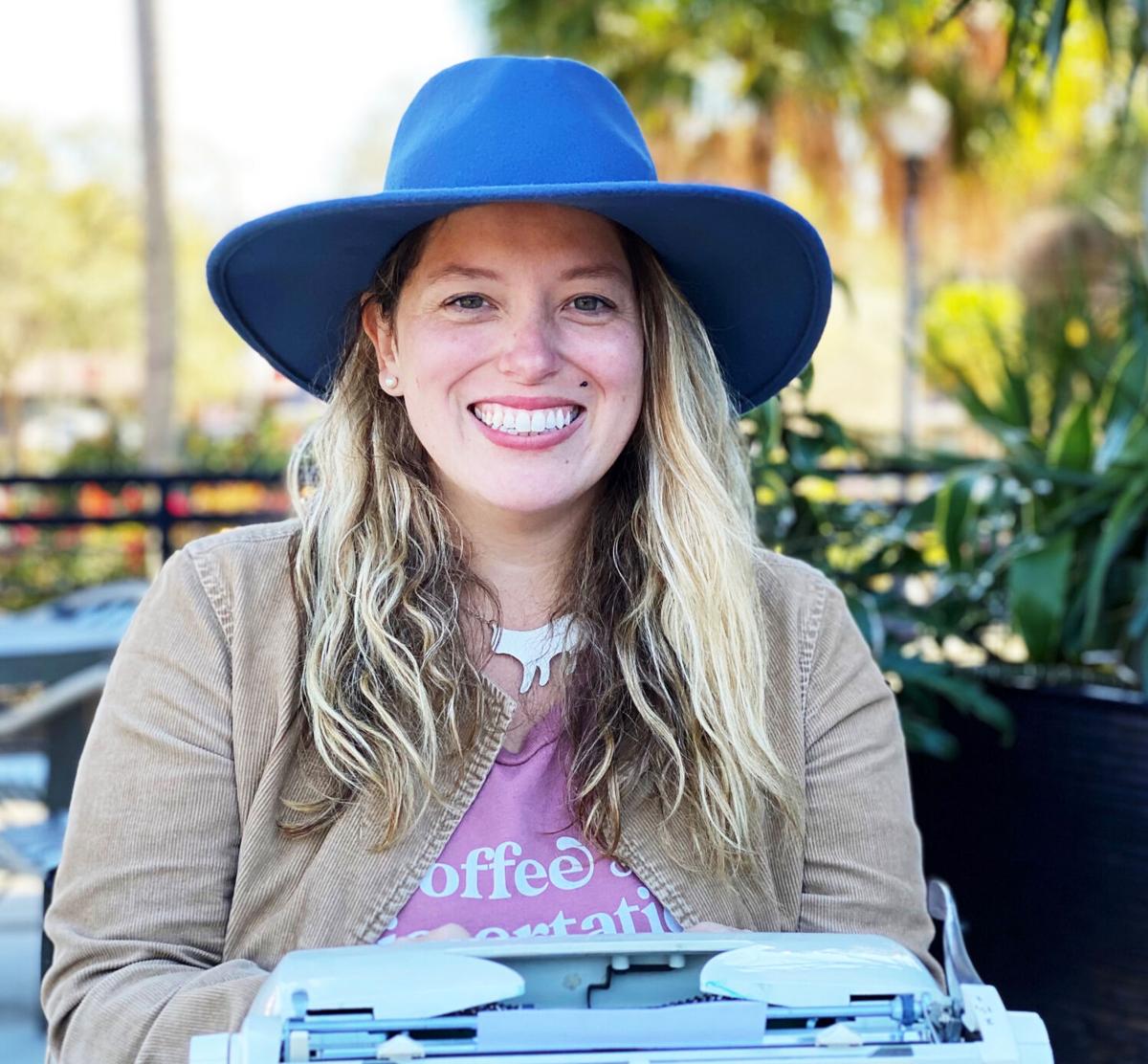 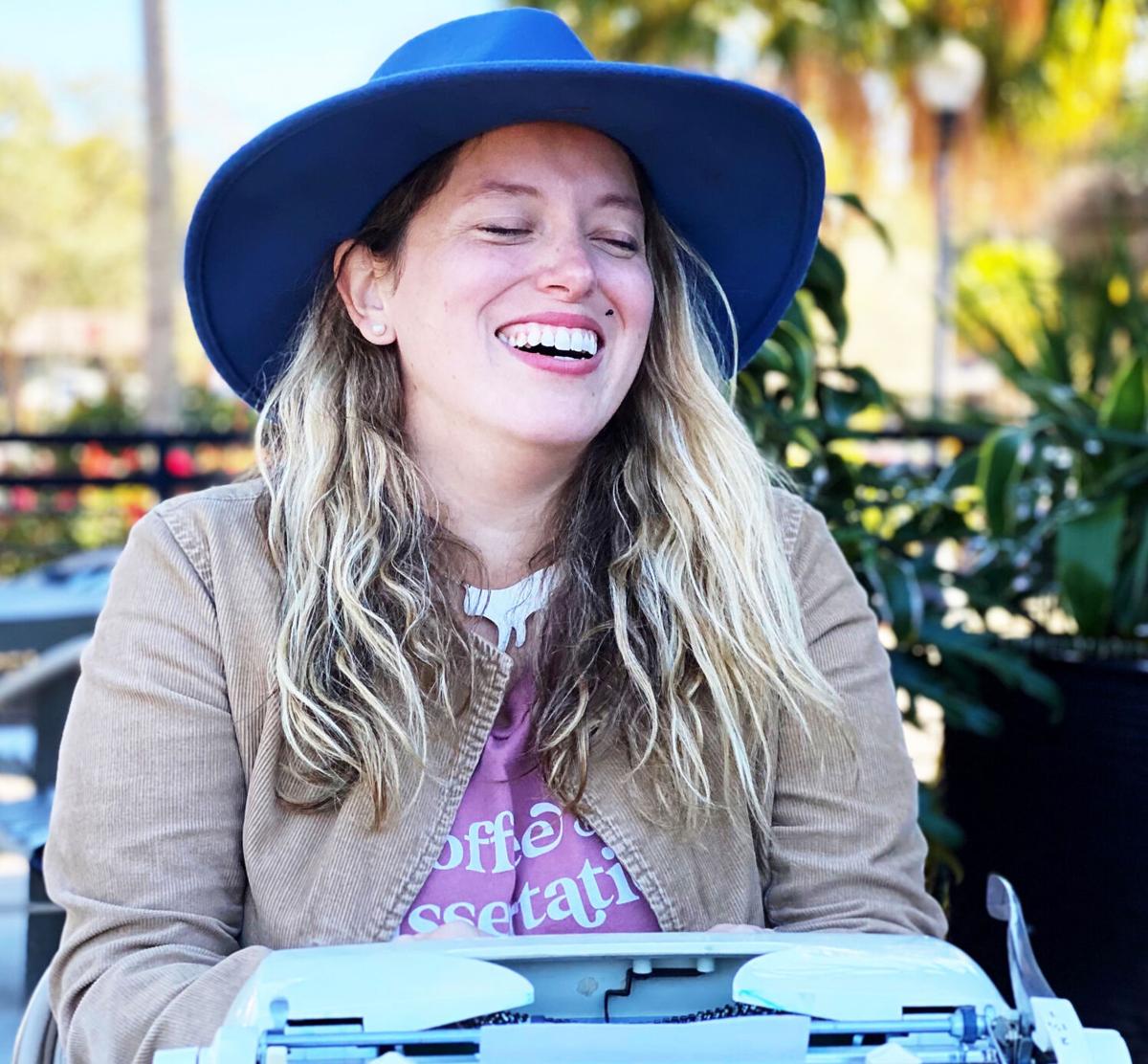 The sporadic stiletto-sharp clack, clack, clack of an old Sears Citation typewriter summons poem to page. The ink, a shade somewhere between fern and jade, dress up words that feel hand-selected – curated and composed in perfect cadence to a thought, a memory. You’ve just told a stranger something intimate – you feel a bit exposed, but reading this poem, your poem, you know divulging was the right choice. You needed these words – you didn’t know how badly. It is signed – dmah, Orange Blossom Poems.

When Diana Álvarez-Hughes went off to college, her parents moved to Lakeland from Orlando, where she’d grown up. Other family members followed suit – aunt, uncle, sister. On holidays and breaks from school, Diana would come home to visit her family. “And then suddenly ‘home’ meant Lakeland,” she said. Several years ago, Diana moved here too. She put down roots with her husband, son, and stepsons. “I find that I have an almost romanticized relationship with the town,” she said. “Because of the community here and the feel and the vibe.”

Álvarez-Hughes holds a bachelor’s degree in Sociology from Florida State University and a master’s degree in Women, Gender, and Sexuality Studies from Florida Atlantic University. She is currently in school working toward her Ph.D. in Multicultural Women’s and Gender Studies.

A Love for Language

Her poetic roots spread back to a sixth-grade language arts classroom. “We were reading a story out loud, and there was a line about this woman being so nervous that her teeth were like a pair of dice being shaken in a cup. I remember hearing myself go, ‘Oh, that’s good.’” The teacher asked who had said that, and Diana reluctantly took credit for her comment. “That’s good, that you can tell that’s good,” her teacher told her.  At eleven years old, that moment was affirming for Diana. “It became like a door had opened. Like someone had told me, ‘Hey, here’s a way of learning more about yourself.’ Which when you’re in the sixth grade is so powerful.”

As time carried on, she would find herself at the mercy of beautiful and vivid language. Diana remembers moments like a day at a friend’s house being so captured by a poem that hung on the refrigerator that she stood and read it again and again. “I remember this line about her lover’s skin being like flaky sweet pastry. […] When I think back on it now, all of these moments are like little lines that I was grabbing, and [they were] staying with me. I feel like that’s what got me into poetry.”

Pushing aside that pesky impostor syndrome self-imposed by many creatives, Diana took ownership of her title as a poet when she started Orange Blossom Poems. “I was thinking, who is to say that I’m not if I start there? [...] I write words, and I feel good about them, and I share them with people, and they feel good about them. If that’s a reality, what’s to say that I’m not a poet?” she said.

Her designation felt cemented the first time someone sent her a photo of one of her poems framed at their house. In an age of endless photo collections on digital devices, what we choose to represent ourselves to guests, to remind us of who we are in the form of a framed photo or piece of art, is so very personal. “To know the words that I made, made it onto this place – they’re not in a drawer, they’re not in a book – which still feels like a great honor, and I hope to one day be published – but even in a book you’re not always aired out and always there for consumption.”

For much of 2020, Diana was isolated from her parents and extended family while quarantining with her own. She said, “The social distance really got to me, and I was thinking, ‘What can I do? What can I create for the people of Lakeland that will help us have a community in a way that maybe we haven’t had or aren’t having?’” She thought to herself, “I know a lot of words,” she laughed as she said this. “And if I go that way, the words have never let me down, and what’s to say they wouldn’t let the people I’m writing for down?”

Before she joined the market, Diana had wandered over to a Buena Market at Red Door one day. She walked through the market, admiring local vendors’ selection and soaking in the atmosphere of kindness. After following one of the vendors on social media and seeing posts about the market, Diana decided to see if her brand of poetry was something Buena Market was interested in featuring. It was. “Ever since she invited me to come and be a part of it, I have started to feel like I’m part of that community, and I’m part of that group, and I’m part of the Buena Market family,” said Diana. “I would say that they have been integral to this whole process.”

Diana set up shop at her first Buena Market as a vendor with a mix of nerves and excitement rushing through her. The street poet sat at her table, typewriter in tow, and a sign reading, “Your topic. Your poem. Your price.”

“When folks come up, sometimes they have a topic already, and when they don’t, I have guiding questions that I ask them until we find where the heat is, and then that’s the poem that I create for them,” she explained. She takes a few notes and then sets to work crafting a personalized poem. From strangers, she typically is only getting the tip of some greater emotional or situational iceberg. Working with these fragments, she creates a gem, forever theirs living, breathing on a small typewritten sheet of paper. Sometimes though, she does get to see the jagged icy bits, the ones facing the seafloor, no sun reaching their frigid depths. As a poet (and jokingly, part-time therapist), Diana honors those raw memories and emotions shared with her.

“It has been really, really humbling, the topics that folks will share,” she said. “There have been many topics that have felt quite intimate.” The poet places herself in their position – sharing these intimacies with a stranger in a public space. “This is obviously very important to them, so let me sit here and allow them to have this space and then use that which is very close to their heart to create something.”

“Your price” was a purposeful move on the poet’s part too. She didn’t start Orange Blossom Poems to make a killing, and so people pay what they think is fair for her art. She said. “It was more to give the people of Lakeland something they maybe needed that they didn’t even know they needed. […] I didn’t want for that to mean that only people who looked a certain way or had a certain amount of money could afford it.”

She can remember a twelve-year-old girl coming to her with $3 and the attitude not of ‘I only have $3’ but of ‘I would like a poem, and I can even pay you.’ Her payment policy has gifted her moments like this – the opportunity to write for this young girl who might otherwise not have been able to access Diana’s art. That, she said, would not have been fulfilling her original mission.

“What I hope the poems do beyond my time with them is just to continue to be read, to be seen. Because they were so specific to the moment in time when the person had them created, I hope that they serve as a snapshot, a memory as things go on and their life happens, of this moment and where they were then.”

Diana certainly hopes for continued success with her poetry and will eventually travel to other cities with her typewriter. Currently, she’s soaking in the ‘here and now’ of her work – the happiness, the heaviness, all of it.

“The most exciting thing has been watching it fruit and ripen and blossom on its own. I am but a vessel of the words, of the memory, of the experience.”

Lakeland’s newest recreational respite, Bonnet Springs Park, is slated to open in 2022. Only…